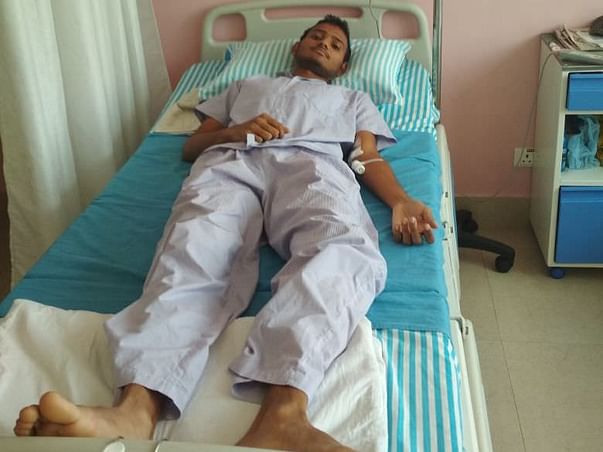 Since one year SARAN  is getting back pain ..he and his parents thought it was normal pain..because he used to play sports well..just before 10 days while he was playing he suddenly fainted for the first time..then after two days he again fainted in home..then his parents admitted him in a local hospital nearby...they confirmed it was blood cancer due to damage of bone marrow ( Acute Lymphoblastic Leukemia ) they said that chance for cure is 50-50 ..then through the suggestion of doctor of his domicile place , he was admitted in CARE hospitals GACHIBOWLI hyderabad telangana ..he was  admitted and being treated for more than 4 days and doctors of CARE hospitals assure them more than 70 percent chances to recover ..1.5 lakhs has been spent on his treatment by his parents till now..

Doctors are estimating a cost of another 15 lakhs for further treatment ..over all treatment cost may raise upto 20 lakhs.. but their parents are not in a position to pay that huge amount as they are from a lower middle class family.

Doctors suggested that he needs chemotherapy for 2 years to recover ..he is just 23 years old and has a bright future ahead ...let us save his future by our kind deed

Donate
0%
Be the first one to donate
Need Rs.2,500,000
Card, Netbanking, Cheque pickups
Or Donate using