Help Raise Awareness On Freeing Temples From State Control | Milaap
This is a supporting campaign. Contributions made to this campaign will go towards the main campaign.
Milaap will not charge any fee on your donation to this campaign. 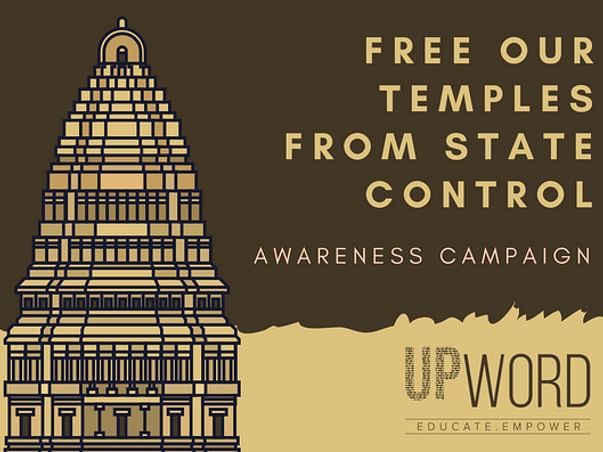 I am an engineering graduate from IIT Roorkee. For the last few years, I have been working fulltime in the area of education, policy, governance and rural empowerment, with grassroots organizations like Ekal and Vision India Foundation.
The contradictions of Bharat
In the course of my fieldwork in rural as well as urban India, I came to realize that our society is in shambles. We have no sense of ownership of our resources, much less our heritage, and we are speedily drifting away from our civilizational ethos. As a community, we are suffering from an acute identity crisis and guess what, not all of it can be blamed on biased school textbooks. Further, the poverty across the country is truly astounding and there are numerous communities that have been forced to live a life of extreme deprivation just because they happened to miss the bus of 'progress'.

At the same time, I noticed an inspiring spark in the common men and women of this ancient land that made it hard for me to become cynical and lose hope. I realized that the indomitable spirit of these ordinary people, struggling hard to make ends meet, came from an unshakable faith in the divine. And I found that it was not something that the contemporary generations specialized in, rather it was a defining trait inherited from distant ancestors going back several millennia. No wonder India is the longest surviving civilization, given that grit and cheerfulness are a part of our spiritual inheritance.

Our temples are crying for attention
This intriguing contradiction between material poverty and spiritual abundance led me to investigate the wellsprings of India's cultural and spiritual life, our Temples. And I did not like what I saw there!

I saw broken murtis and dilapidated paintings. I saw looted heritage and predatory land-grab. I saw impoverished priests and languishing sculptors. I saw shameless corruption and shocking indifference. I saw paid-darshan queues and rampant commercialization. I saw temple priests getting paid Rs. 19 per month (no typo error here!) as salary for performing puja. I saw temples unable to render the basic services expected of them like feeding the poor, imparting education to the needy and protection of cows. I saw the funds donated to temples getting siphoned for other purposes by the authorities. I saw an ancient knowledge tradition being trampled by arrogant bureaucrats. I saw Hindu temples under the control of a secular government.
Temples are a reflection of society
As I connected the dots, I realized that the sad condition of our temples was reflective of the state of our society not just in a poetic sense but was, in fact, one of the major contributing factors to the mess we collectively find ourselves in. In other words, the health of our temples is organically connected to the welfare - material, cultural and spiritual - of our nation. Our temples have been the nerve centers of India's socio-economic life for centuries and without their revival, all ambitions of making India a strong and sovereign nation are nothing but a pipe-dream.

The terrible condition of our temples, though some of them may look nice and shiny on the outside, is directly attributable to the unbridled interference of the Indian state in their affairs. To be sure, the honour of being run by the government has only been granted to the temples. Not mosques. Not churches. Not gurudwaras. But I digress.
Harder than realizing the extent to which our temples have been abused by the state was to come to terms with the reality that no one outside the echo-chambers of social media cared. I spoke to friends, relatives, neighbours and even complete strangers, only to be met with a carefree shrug and a blank expression. These were not people who didn't care. They were genuinely warmhearted individuals who just didn't fathom the gravity of the problem. So, I decided that I would make honest and sincere efforts to raise awareness about the issue. Only when people woke up to its gross overreach would the state admit its folly and withdraw from the sacred precincts of our marvelous temples.
UpWord - A not-for-profit media platform for raising awareness on civilizational issues
I pondered over this for long and came to the conclusion that the comprehension deficit all around us was not restricted to just temples but extended to history, philosophy, religion, politics, culture and so on. This is a direct consequence of us being products of a broken education system and there is a burning need to fill in the gaping holes in our collective self-image by educating people on various matters of philosophical, spiritual, cultural and political import. To that end, we figured that the best, most-effective and cost-efficient method is to harness the power of technology. We studied many different models of education and arrived at short animated videos as the final choice of our medium of raising awareness.

To sum up, a few friends and I are in the process of creating a non-profit organization (we have named it "UpWord") that dedicates itself to this urgent cause of raising awareness on civilizational issues of all kinds and have been lucky to get the attention of many patriotic investors. However, we want to first make a sample video, a sort of prototype, so that we can show the investors the quality and impact of what we are setting out to do. Needless to say, we want to start from the start and our first video is on the topic of the need to free our temples from state control.
Appeal
We seek your support in helping us bring about a tangible positive change in the awareness of the average Indian on matters that make-or-break Bharat. Vande Mataram.

Ask for an update
Donated to this campaign via Paytm or bank transfer? Click here if you have not received an email confirmation from Milaap.
Dear supporter,

We know that in all probability, you would have already seen the video by now and must be already aware of the impact it is making. From the day it was published (Aug 22) to now, it has spread like wildfire and for a YouTube channel with zero subscribers, it has done phenomenally well with nearly 35k views in just 4 days. On Facebook, the video has been watched by more than 70,000 people across the various pages that have shared it independently, without any push from our side. If we estimate the reach of whatsapp, it is likely that we have crossed the 1 million mark in terms of viewership. If you haven't checked it out yet, here's the video. Please do share it widely in your circles... https://youtu.be/js936p_cvTE

We are thankful to you from the bottom of our hearts. You believed in our intent and put your trust in us and we are grateful to the devas for helping us keep our word.

Meanwhile, we have incorporated Upword as a not-for-profit section-8 company and we've also set up the website. We have started working on the next videos, the topics for which we will announce very soon. We request you to stay in touch with us by subscribing to our newsletter by filling up this form.

Thank you again for your contribution. Subscribe to the YouTube channel and follow Upword on FB and Twitter. Remember that Upword voices your concerns, articulates your thoughts and stands for your civilization. It is not a cause you are donating to. It is a movement that you are a part of.

The sketches are done and we will be completing the animation and sound within the next couple of weeks. Further updates will be posted on the same.
Dear Supporters,

We are overwhelmed by the support received. Although this is the first withdrawal request from our side since it is for the amount received in dollars, by which we will have to pay the second instalment to the animation professionals we have engaged. We will use the amount received in INR for making the advance payment.

The video will be out by the end of July and, of course, we will share it with you first. Thank you for the amazing support, do keep sharing this campaign further with your friends and family.

You are sending a message to
Venkata Rami reddy
Go back 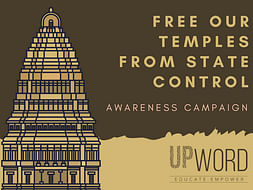