Young Girl Will Lose Her Life To A Deadly Disease Without Urgent Help | Milaap
This is a supporting campaign. Contributions made to this campaign will go towards the main campaign.
This campaign has stopped and can no longer accept donations. 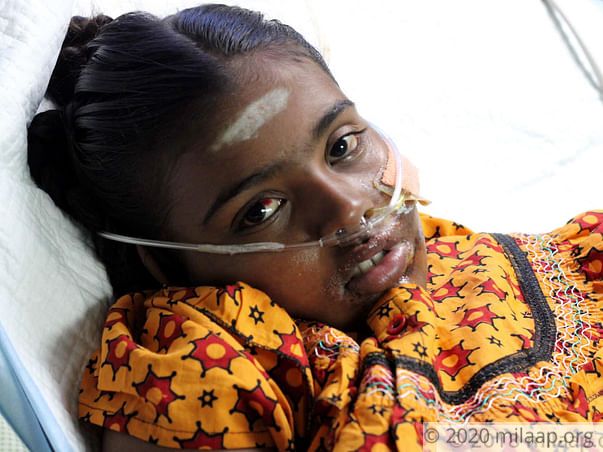 11-year-old Mithra is an all rounder student, she has always stood first in her class and has always been the favorite among teachers and her friends. Ever since she saw an air hostess on TV, she wanted to become one and she even liked to dress up like one. Her parents would always feel proud when she spoke and read English fluently. She used to tell her parents that she'd take them in a flight once she secured her dream job. She was full of energy and smiles. Two weeks back when she got a fever, no one thought that it would turn so life-threatening. Even before her parents could understand what was happening to her, she became very critical. Her teachers and friends at school are praying for her, in fact prayers are the only hope and comfort that her parents have now.

Mithra is the eldest daughter of Thiyagarajan and Deepa. When she got a fever recently, her parents thought it would subside as usual. Despite running a high temperature, Mithra insisted that she attends her classes. Her parents sent her to school reluctantly and within a few hours they got a call from the school saying that she had fainted. They took her to a nearby hospital and the blood tests revealed that she had dengue fever. They were asked to take her to another hospital immediately, where Mithra was also diagnosed with coagulopathy, a condition in which the blood's ability to form clots is impaired. This condition can cause a tendency toward prolonged or excessive bleeding. She also got hemophagocytic lymphohistiocytosis, a potentially fatal disease in which the immune system begins to damage the patient's own tissues and organs. She needs treatment for another 10 days to recover.


"I do not understand the medical conditions, but I can see my child suffering. She was in ICU for a week, when she opened her eyes, she started saying 'Amma... Amma', she was not able to say anything more. Tears rolled down her eyes. She has no strength at all. We have spent 3 lakh only on her medicines, it's the only thing keeping her alive." - Deepa, Mother.

Last month, Mithra's father Thiyagrajan read in a newspaper about the death of twins in Chennai due to dengue fever. The newspaper also had information on precautions to follow. When her father read out to her, she immediately asked her father to give her the newspaper clipping to put it on her school notice board. Her mother Deepa recollects this incident with tears and says, "Even at a very young age, she always wanted to help others, she is  very disciplined, I can't bear to see her in this condition."

Mithra likes to play with her little brother Giridharan (7). She helps him in his homework and she also shares all her toys with him. But last week when her brother came to see her sister in hospital, she did not even recognize him and she was too weak to even get up from the bed. She kept looking at him and did not say anything. Her parents were completely shattered. Her parents are worried that they might lose their precious daughter.

Mithra's father Thiyagrajan is a daily wage worker. He earns Rs 500 per day. With this meager income he managed to feed his family. His only hope in life was his children. He was hopeful about their future. Despite his poverty, he was determined to get his children educated. Mithra's diagnosis was a big blow to him and since that day he has been running to everyone he knows. He has nothing left with him and doesn't know whom to turn for help. He has no strength to go to hospital with empty hands, he spends his time in the temple, praying every second for his daughter's survival.

"My husband leaves early in the morning and comes late in the night with few hundreds that he had borrowed from his friends. We have spent everything we had in the past 2 weeks. We need 6 lakhs to continue the treatment.We don't know what we can do.  I can't imagine a life without my daughter." - Deepa.

11-year-old Mithra is suffering from dengue and a rare disease that affects her immune system. This young, energetic child is now battling for her life. She needs treatment for 10 more days and her poor parents are struggling to save her. Only your support can help this young girl survive this disease.

Your contribution can save 11-year-old Mithra's life 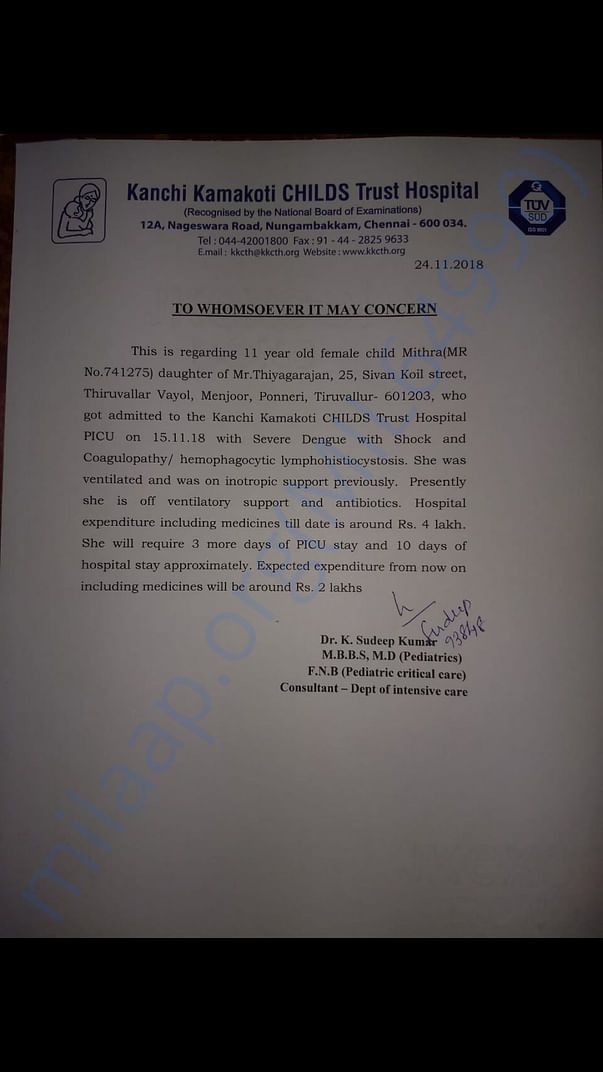 Mithra is doing well. She got discharged and is stable now. She is recovering from dengue and now she is alright.

Thank you once gaian.

I am rejoiced by the love and support blessed on Mithra.

She is presently at home under bed rest taking medicines. She underwent her treatment successfully and all the infection from her body has been removed. All her reports are normal at present and she will be visiting the hospital for regular check - ups.

Thank you all for the tremendous support.

Report fundraiser
See how thousands are crowdfunding for their causes on Milaap
Rs.101 raised

Donated to this campaign via Paytm? Click here if you can’t find your donation listed below.
A
Anonymous donated Rs.101

Get well soon Mithra... this country needs hardworking people not to live a life of luxury but a meaningful life dedicated towards betterment of the world at large.

Donated to this campaign via Paytm? Click here if you can’t find your donation listed below.
A
Anonymous donated Rs.101

Get well soon Mithra... this country needs hardworking people not to live a life of luxury but a meaningful life dedicated towards betterment of the world at large.

You are sending a message to
Sidhartha Verma
Go back 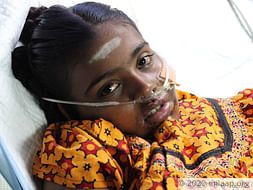