Honey's online fundraiser for Medical | Milaap
This is a supporting campaign. Contributions made to this campaign will go towards the main campaign.
This campaign has stopped and can no longer accept donations.
Support 16 year old Hussaid to survive Traumatic head injury caused due to house collapse 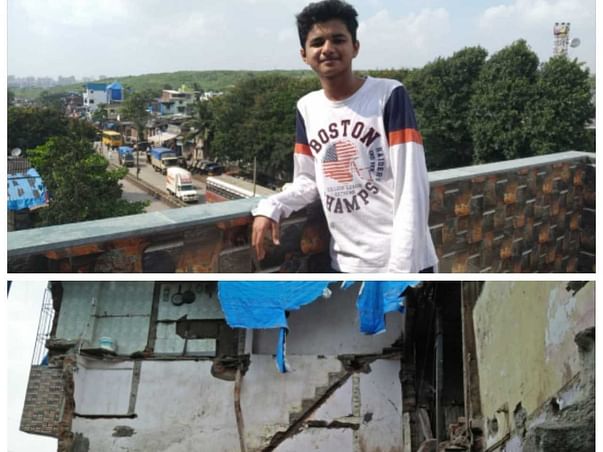 Share
Life is what happens to us while we are busy making other plans. And while Gautami Kharat was wrapping chocolates to be sent to a select group of donors to an NGO she works at, destiny had its own plan. Like all working mothers, she had left her 15 year old daughter Hummaira and 16 year old son Husaaid at home. Who was to know that their rented house  in Govandi Mumbai , would cease to exist in a few minutes.
Hummaira was busy studying while Husaaid was lost in a world of musical notes when all of a sudden, the entire building collapsed. A distraught call from her husband, garbled words punctuated with long sobs, had her rushing home. While Hummaira escaped with only minor injuries, Hussaid had sustained life threatening injuries on his head, abdomen & chest. He was unconscious. At the Shatabdi Municipal hospital in Govandi, upfront about the lack of resources to handle such a severe case, the hospital suggested Hussaid be shifted to a bigger, multi-specialty facility. Unable to afford such expensive health care, Gautami was forced to admit her only son to a slightly better facility but nowhere near what her heart knew her child needed if he was to survive. The doctors at the new hospital wasted no time in expressing their inability to carry out an urgent head surgery as they did not have an expert neurosurgoen on their panel. Gautami had no choice but to shift him to ZEN Multispeciality hospital in Chembur.
Hussaid has been operated to remove the blood clot that had formed. It has been 6 days since the surgery. He is still under heavy sedation and on life support. Attempts to reduce sedation drugs and slowly ween him off life support have not been successful so far. But the doctors have hope...their experience tells them that recovery is extremely slow in such cases and could even take several days.
Hussaid won't survive on hope and prayer alone. The hospital bill has already crossed Rs 5.5 lacs. With daily ICU charges of Rs.50,000 a day and an anticipated 10 to 15 day stay, Gautami and her family are looking at an additional amount of Rs. 7.5 lakhs. Gautami's husband Nussad is a contract worker. Their entire life savings, help from the organisation and medical insurance have been consumed. While another home can be found and utilities replaced, they need your help to give their son a new lease of life. They need you to be the wind beneath their wings.
Gautami was busy making everyone's Diwali brighter and sweeter. She needs to know the universe will reflect her sentiments back at her. Any contribution, small or large, will give her the resilience to hang on. Not for herself, but for her son. You can make this possible. Please give Hussaid the ability to get the medical attention he needs so he may grow up and live to tell the tale of humanity and selfless love . So he may live to see another Diwali, Eid and Christmas.