He Cannot Even Drink Water Now Because Of Stage III Throat Cancer | Milaap
This is a supporting campaign. Contributions made to this campaign will go towards the main campaign.
This campaign has stopped and can no longer accept donations. 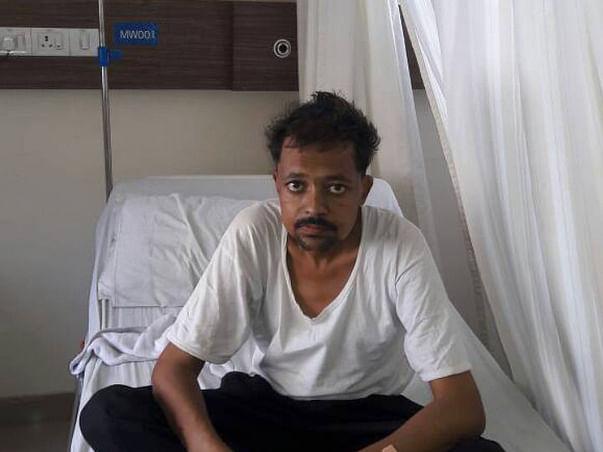 "If we had waited for the doctor to get back to us with the results of his test back in December, his cancer probably wouldn't have gotten this worse. All this while, we did not even know it was growing and now it is so close to killing him."

Shivanada, a simple man from a middle-class family in Bijapur, was unable to swallow food. He thought it may be a sore throat, but the diagnosis shook his family. Today, the man is fighting Stage III throat cancer with no income.

Back in December, Shivanada was having trouble swallowing food. He would hardly eat and upon insisting, he went to the local doctor. When they could not figure out the problem, his wife suggested they go to the hospital in a nearby town. At Suchirayu, he had an endoscopy.

"We kept waiting for the doctor to get back to us. He was on leave the next day. We never got the results. Our daughter's marriage had been fixed. So much work was pending so we just came back. Even though he had trouble and a lot of symptoms, he managed."

After February, things got worse. This time, Shivanada was having trouble breathing, he was not able to even take a sip of water. They went to HCG where a second endoscopy gave them the result they missed months ago. He had throat cancer.

A life of misfortune

Sunanda and Shivanada live in Bijapur. Here, they owned a store in the market that sold stones used for traditional chimneys. That was the only source of their income. With three children, they had to work hard to make enough.

"With modern kitchens, nobody wanted to buy these stones. So we had to close our business. Our daughter got married, our younger son is studying, and our elder son is working in a showroom for Rs. 7000/month. He supports his brother and the house. But, with these rising expenses, we are hardly able to get by."

After Shivanada was diagnosed, he needed an aggressive session of chemotherapy. As soon as he was discharged and came back home, he had a serious episode of blood vomiting. The family had to rush him to the ER to control the situation. So far, he has been getting worse, and they have spent Rs. 1 Lakh on his treatment.

Helpless is the name of this ship

Shivanada needs two more sessions of chemotherapy before his surgery. Unfortunately, his family is unable to afford even his medicines.

"I don't think we will be able to go for the next session. We don't have enough. We have asked everyone we know. We cannot come up with this money. My husband will lose his life if he does not continue his fight."

They need Rs. 3.50 Lakhs and have nowhere to go. Your contribution can help save Shivanada's help. 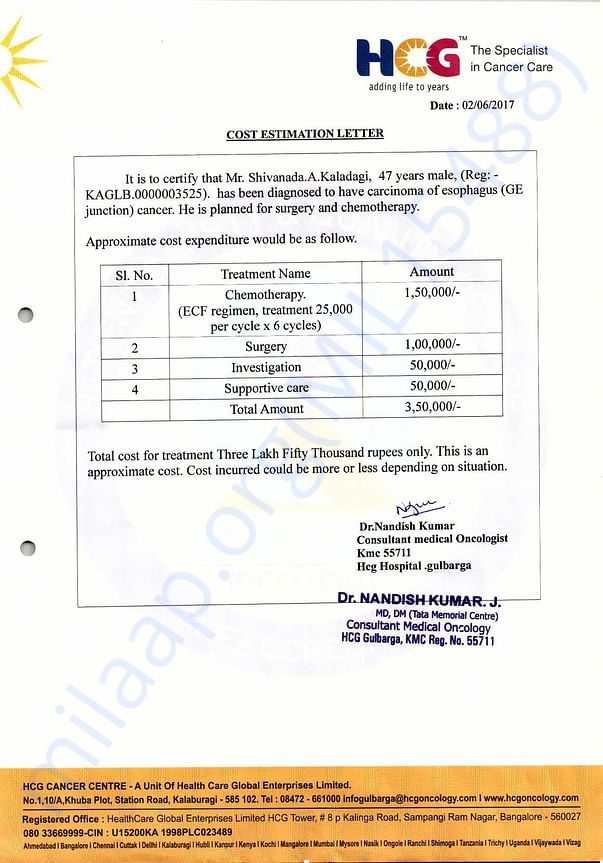 Despite all efforts he did not respond to the treatment and he passed away on 04/08/2017.

The funds have been utilized for his medical expenses.
Please keep the family in your prayers.

Thank you for the support.
Dear supporters,
Shivananda is undergoing his chemotherapy. The last one was done on 26th May'17 and the next tentative date for the same is on 26th June'17 if all the other constraints are stable.
His condition has improved. He undergoes a blood test 2-3 days before and after the chemotherapy is done just to keep a check on the blood counts.

The doctors have advised him to be on a liquid diet for now as it is really difficult for him to swallow the food.

Thank you so much for coming forward to help him. Please keep sharing the campaign.

S
You are sending a message to
Shivananda
Go back 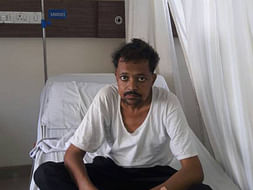