Deadly Cancer Is Snatching Away State Level Volleyball Player's Dreams | Milaap
This is a supporting campaign. Contributions made to this campaign will go towards the main campaign.
Milaap will not charge any fee on your donation to this campaign. 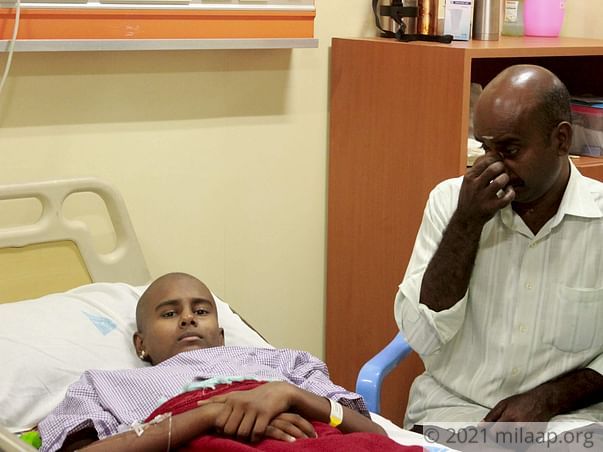 15-year-old Swathi has an undying passion for volleyball. She is one of the best players in her team and has won many prizes at district and state level. Her next goal was to take part in national level competitions. She is also equally good at her studies and chose commerce to become a chartered accountant. This young, ambitious girl's life is now threatened by deadly cancer and she doesn't know that her life will be cut short by this cruel disease. She agreed to shave her head after the doctors and other patients in the ward convinced her telling that it is better to shave it than to lose her hair little by little because of high dosage of tablets. She is now almost bedridden, with no energy to even speak.

One day, when Swathi was in her school, she started to bleed from her nose. She wiped it off and didn't take it seriously. When her nose started to bleed the next day also, she told her parents. They took her to ENT doctor and she was given tablets. The bleeding did not subside even after a week, it was then they took her to a bigger hospital. Scan reports revealed that she has refractory myeloid leukaemia, a form of cancer that starts in the bone marrow but it quickly moves into the blood and can spread to other parts of the body. It is refractory because it did not respond to the initial treatment, and needs more treatment to reach complete remission. Therefore, she needs chemotherapy and a bone marrow transplant as well to recover completely.


"Within a few days after the diagnosis,she became very weak. She is not able to even get up from the bed. She is not able to eat anything, all she has for a day is a glass of milk. Initially, she was asking us so many questions, she wanted to go back to school but now she has lost all her energy. She keeps tossing in pain and hardly has a good night's sleep. I fear that this disease might take her away from us before we can help her." - Jayanthi, Mother.

Swathi before the diagnosis

Swathi's parents have told her that she has an infection in her blood and would require treatment for it. She has an elder sister Sharmila (17) and younger brother Srijith(7). Her sister is in 12th grade preparing for her board exams. Her parents could not find the courage to tell their children about the deadly disease. Now, while her mother takes care of her in the hospital, her father manages to take care of his other children. Their lives have just turned upside down and they live in the constant fear of losing their daughter.


"I never imagined that we would face such a situation. I don't know how long I can keep the news away from her. She has a long way to go. In these 2 months in the hospital, I've seen parents crying at the loss of their child, some parents taking them home healthy and happy, I do not know what my fate is. She deserves a life and I'm longing to see her getting normal and playing Volleyball again." - Jayanthi.

The life-saving transplant is beyond this poor farmer's means

Swathi's father Karthikeyan is a farmer and has no stable income. There are months where he doesn't get any income and during those times, he does odd jobs to feed his family. Despite his poverty, he was determined to support his children by all means. He has never said 'no' to any of her tournaments, even when he did not have enough money. He was hopeful that she would be successful and happy in her life. Her sudden diagnosis is a big blow to him.


"I'm borrowing money from everyone I know but nothing is enough for her treatment. I do not have anything to sell. Her treatment costs 30 lakh and I dread at the very thought of it. Doctors said she needs bone marrow transplant at the earliest. It is in painful to see her suffering every minute and it is terrible that I can't do anything about it.' - Karthikeyan.

15-year-old Swathi is battling deadly cancer that can quickly spread to the blood and other parts of her body. She had dreams to become a chartered accountant and take part in national level volleyball competition but now her life has come to a standstill. She doesn't know that she is fighting cancer, she hopes to return home soon but she can survive only with a bone marrow transplant. Her father, a poor farmer, cannot afford it. 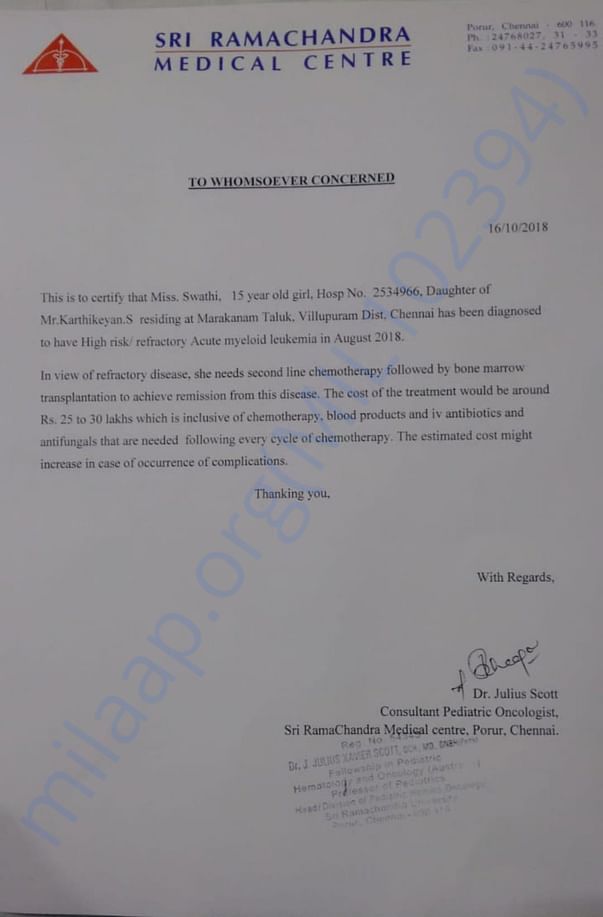 Swathi is still in  the hospital. She successfully underwent her Bone Marrow Transplant and is doing well.  She is responding well to the treatment and recovering.

She is currently undergoing her Chemotherapy. She is in the hospital. She is doing better compared to earlier. Once the chemotherapy is over, doctor will decide on the bone marrow transplant. We shall keep you posted.

A humble thank you for the overwhelming support!

Swati is presently in hospital, undergoing her 3rd cycle of chemotherapy. Doctors tested everyone in the family for a match for the bone marrow transplant but hasn't got one yet.

Please share the campaign so that we could raise enough funds.

You are sending a message to
ajay raj
Go back 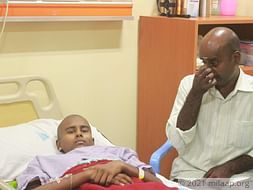