Baby Who’s Spent All Her Birthdays Getting Chemotherapy Needs Help | Milaap
This is a supporting campaign. Contributions made to this campaign will go towards the main campaign.
This campaign has stopped and can no longer accept donations.

Baby Who’s Spent All Her Birthdays Getting Chemotherapy Needs Help 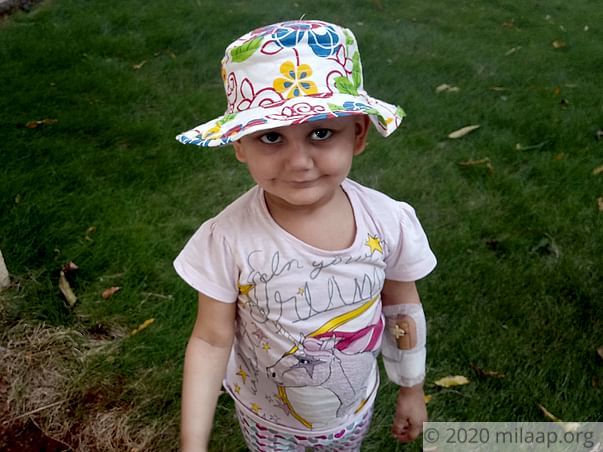 As she turned 3 in September, Triya blew out her candle with a wide smile and the little energy she had left, but it was her father Parik who made the wish. He hoped and prayed that this is the last birthday his little daughter would celebrate in the agonizing pain of blood cancer. Triya has spent her birthdays in the confines of the hospital, but she never complains. The little one is so blissfully unaware of the dangerous outcome of cancer, that even during chemotherapy, she asks her father to colour with her. Her smile brightens up the cancer ward and she waves and talks to every doctor and nurse that passes by. Triya spreads a little bit of joy everywhere she goes, but cancer threatens to take away her smile forever if she’s not treated in time.

Parik and Varsha were happy to see their happy and healthy child grow. As she said ‘mama’ for the first time, the delighted parents were eagerly waiting for her next milestone. Her smile was all they needed to brighten up a gloomy day. However, in April 2017, Triya fell sick. Her fluctuating fever was cause for concern, but all her tests came back normal. For weeks she underwent numerous tests until her parents were finally told that she has blood cancer. At that moment, their whole world came crashing down. Six months after gruelling chemotherapy, Parik and Varsha took home a seemingly recovering child.


“She was slowly regaining her strength. She began colouring, talking full sentences and would ask me to play with her the second I came home from work. We could see our Triya slowly coming back to us. We thought she had survived the worst.” - Parik, father.

However, in July 2018, Triya’s cancer relapsed. Now, chemotherapy isn’t enough to save her – she needs a bone marrow transplant at the earliest.

After spending 12 lakhs on his daughter’s treatment, Parik has no one to turn to

After spending more than a year in and out of the hospital, Triya has made many friends in the hospital, but as she watches the other children around her going home, she asks her father ‘papa hum bhi chale?’ (shall we also go home?). Parik tells her that they will take her home soon. He can’t bear to break the spirit of his resilient baby girl, but he knows that if he can’t find a way to arrange 33 lakhs for her treatment, she might not make it to her next birthday. His income working in a small shop that makes invitations just isn’t enough.


“She doesn’t have much time to get the treatment. We just a have a few weeks left to try and arrange the money, but after spending 12 lakhs on her treatment already, I don’t know whom to turn to.”

Although little Triya smiles through the pain of cancer, making people around her often forget the monumental battle she’s fighting, she’s running out of time. She needs a bone marrow transplant at the earliest to survive and beat cancer for good, but her parents don’t have the means to save her. Triya has fought bravely so far, but she can beat cancer only with your help.

Your support will save Triya’s life. 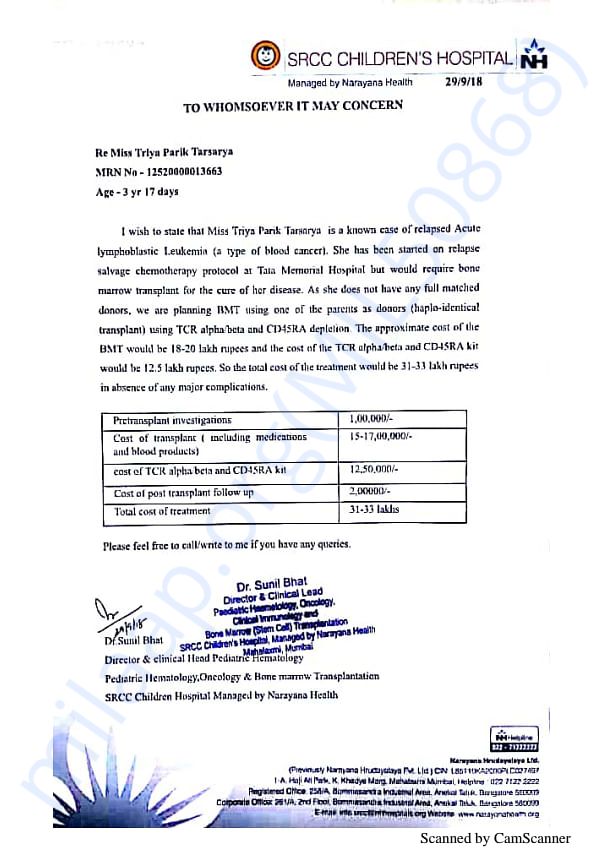 As mentioned in the previous update, Triya is no more with us. She underwent her transplant in December after which her health deteriorated and developed few side effects. She was in  PICU on ventilator support. Despite of maximum medical and para medical efforts, child couldn't survive.

All the funds raise will be utilized to clear her medical expenses.

It is with a heavy heart we inform you all that Triya is no more with us. We will provide a detailed update soon.

Please pray for her soul rest in peace.

Triya is currently in the hospital. She underwent her transplant on 8th of December after which her health deteriorated and developed few side effects. Currently she is in PICU on ventilator support.  She will need PICU stay and intensive care for few more days, hence we are increasing the target amount.

Thank you once again. Please keep her in your prayers and please share this campaign with your friends and family to help this little girl.

Hereby attaching letter from the hospital:

SR
You are sending a message to
Saurabh Rathee
Go back 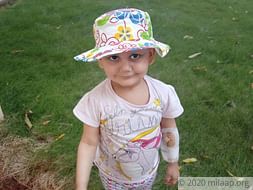 Baby Who’s Spent All Her Birthdays Getting Chemotherapy Needs Help