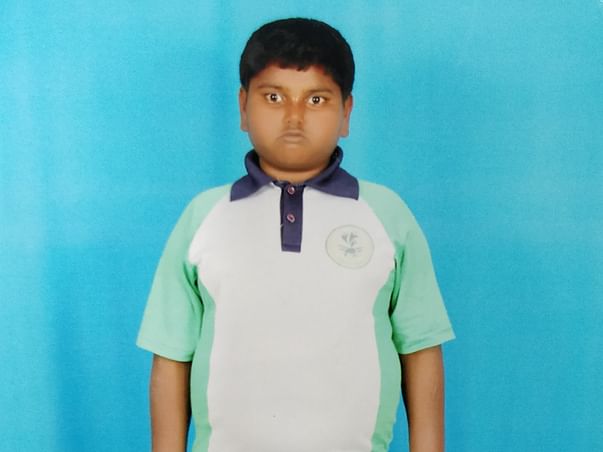 Share
9 year-old Beeresh, son of Nagraj and Shobha, has been suffering from  PILOCYTIC ASTROCYTOMA in Grade I Optochiasmatic Area which was a life threatening lesion in the brain. He was observed by an ophthalmologist constantly as he grew up & he continued to face problems with his health.
He suffered from continuous headaches with vomiting  for three months & was having severe fever during this period.  His parents Nagaraja noticed that his vision was decreased significantly. He was admitted to National Institute of Mental Health & Neurosciences ( NIMHANS). Eventually his symptoms grew worse which led to more testing and the decision was made to operate.
He underwent Bi-frontal Craniotomy and excision of the lesion on Apr 13, 2012 by neurosurgeons at NIMHANS, Bangalore. Post operation he has lost sight in his left eye.
After the partial removal of the tumor, there was a further diagnosis: the lesion was not stable and must be constantly monitored to protect the patient. Now, Beeresh is experiencing recurrent pain and dizziness. Every 3 months, he should be screened by an oncologist, neurologist, ophthalmologist, and endocrinologist. All of these examinations and the required blood tests and scans which are expensive.
Beeresh’s mother is a homemaker, and Nagaraj is a canteen worker & receives a small salary from a private contractor. He is unable to pay all her daughter’s health costs with  his sources of earnings. The scans and blood tests must be done every three months.
We ask everyone to please help us collect the necessary sum for the medical tests, treatment for Beeresh. So we are now fundraising for a new scan for Beeresh, in Mid-February, We need to raise the money for his continuous medications etc. He is still facing memory loss.
We ask you to help Nagaraj, Beeresh’s Father who has done all that he can, to make sure the money is raised and Beeresh receives the treatment necessary at NIMHANS, Bangalore.
Your contribution can give Beeresh the treatment he deserves