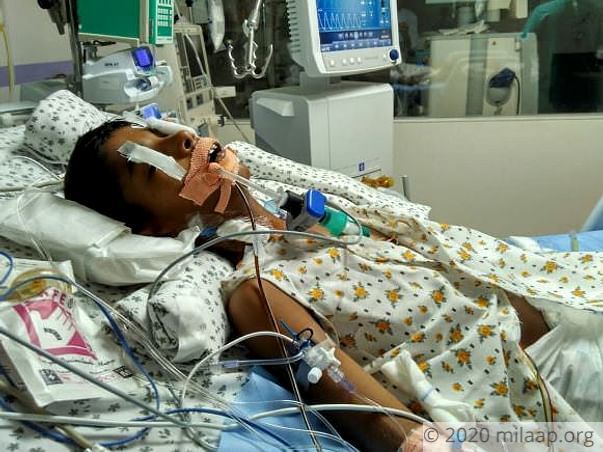 Navadeep had an injury just 10 days back. He was playing at school when he fell down. Lack of correct medical attention led to a terrible leg infection. The infection has become severe and reached his lungs. He is in the ICU fighting it off. His mother Nagamani is running from pillar to post trying to save her child.


Nagamani in the hospital with Navadeep

Navadeep hurt his right leg in school while running with his friends in the ground. He came home and put a Band-Aid on it. But two days later, his leg was swollen and he was running a fever. His mother rushed him to the local hospital in their village. They merely bandaged his leg and sent him home.

The next morning, Navadeep was woke up crying with pain. Nagamani decided to take him to the nearest town Khammam and see the doctor there. Once again, the dressing on his leg was changed and he was sent home with some painkillers. Navadeep's leg continued to worsen though he visited the hospital every second day.

“We even decided to come to Hyderabad to a big hospital. The doctor flatly told me to admit him to a superspecialty hospital if I wanted to save him. He has an infection that has affected his lungs. I brought him to Rainbow Hospital– and they put him in the ICU. They tell me they can save him,” Nagamani says with hope.

Navadeep's injury developed an infection that led to a big clot in his right leg. The hampered blood flow even caused a big clot in his heart which has affected his lungs and breathing. He needs strong antibiotics, breathing support and constant monitoring of theinfection in the ICU.

Nagamani sits vigil outside ICU day and night. She has left her 4-year-old younger daughter Saranya with her mother. When she remembers her small, happydaughter, she sheds a few tears for leaving her alone. But nothing will move her from Navadeep's side right now when he is so sick.

Navadeep is his mother's biggest strength

Nagamani's mother and brother have supported Navadeep's treatment till now. Her husband has a drinking problem and stays with his parents most of the year. Nagamani works in a shop in Khammam and her income is the only thing that runs her home and feeds the children. Her two children are her whole reason for living.

Navadeep is the one she relies on most heavily. He comes back home from school and goes to his grandmother's home to eat and pick up his little sister. He shares his mother's household chores because he knows how tired she is from work.

“He takes such good care of Saranya. She used to make a mess so he would not only clean up his sister, but also wipe the floor. I come back home by 9 p.m. and I know he will call me in case any thing happens. I took him to so many doctors and yet this happened. All he has said in the last few days is how much his leg hurts. Now with the pipes in his mouth he can't even speak.”

Nagamani's family has arranged for Rs 3 lakhs till now. With Navadeep in the hospital they are struggling to arrange for further treatment which is the only way to save him now.

Despite getting no support from her husband, Nagamani managed to remain financially independent and give her children a good, happy life. But her salary of Rs 6,000 is simply not enough to save Navadeep.

Your contribution will give this mother a shot at saving her precious child. 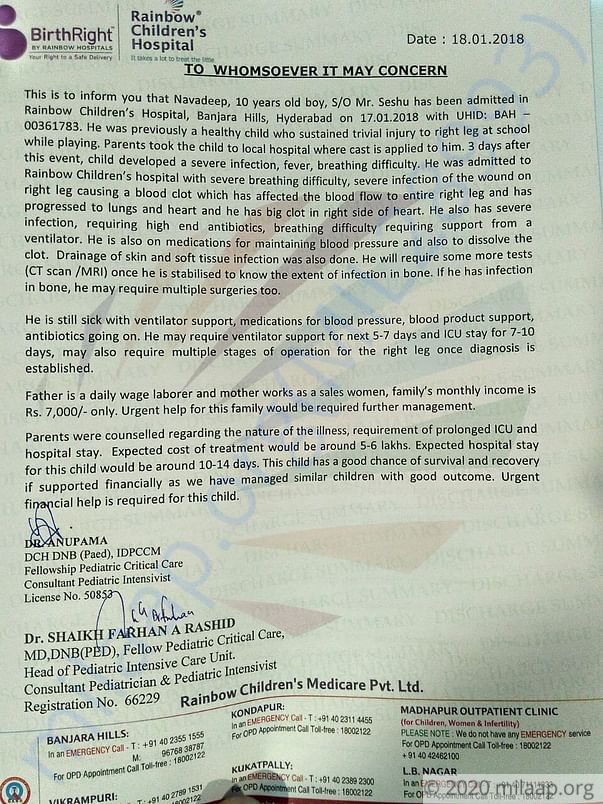 Thank you for the wonderful support that you have shown towards Navadeep. I have some good news to share with you today.

Navadeep is doing better now compared to earlier. He has regained consciousness and is off the ventilator. Based on his health and recovery he has been discharged from the hospital.

He is able to walk now and is also eating food normally and achieving milestones. He has a clot in his leg due to which he walks a little slowly. The doctors suggest that he will take some time but he will recover completely from it.

Thank you for the wonderful support. Please do pray for his health and speedy recovery.

Thank you for your love and support. He was admitted to the hospital with a severe infection on his right leg and he was not able to breathe, that stopped the blood flow to his heart and lungs. There was a big clot in the right side of the heart.

Currently his condition has improved but he still has a long way to recover. That is where we need your support and help. His parents have been struggling a lot to manage all the hospital expenses. Please do help this little boy and his family as he has very good chances of surviving. Attached is the letter from the hospital.

Report fundraiser
See how thousands are crowdfunding for their causes on Milaap
Rs.88,728 raised 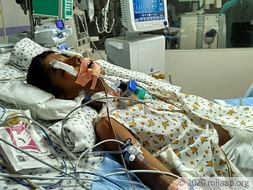