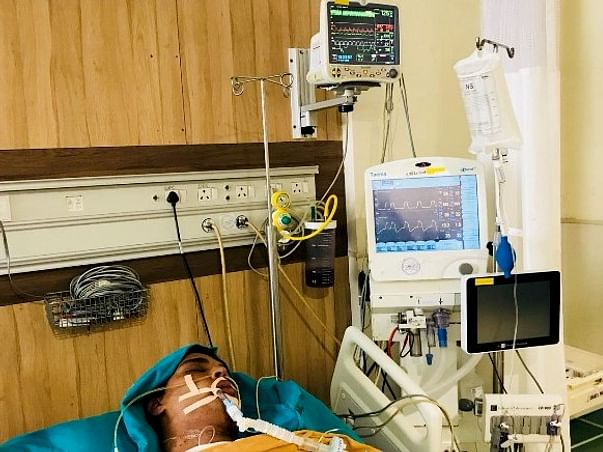 "He has not only been my husband but also my source of strength. We have faced so many hurdles in life but he has not let me down ever.  We have come so far only because of his will to live. Now to see him lying lifeless is crushing me. He has not opened his eyes yet, I cannot let him go. There's nothing beyond him for me and two little children" - Anju, wife of Amit.

27-year-old Amit hardly took a day off from work. He was focused on fulfilling the basic needs of his wife and two baby girls until a deadly liver infection slowed him down.

A few days back, Amit had a high fever and severe nausea. He couldn't eat anything and lost weight drastically. They took him to a hospital in Haryana. Scan reports confirmed that he has deadly infections in his liver. Anju was asked to take him to a hospital in Delhi. It was a huge decision for Anju to leave the elderly parents of Amit and her two little children at home who are just 2 years and 6 months old respectively. She gathered all her strength, borrowed money and came to Delhi all alone for the treatment.

"By the time we reached Delhi, the infection had already spread to his kidneys and liver and they are damaged badly. I was not able to digest what I heard from the doctors. I did not want to believe it but in the blink of an eye, he fell unconscious. I cried, begged and shouted aloud but nothing helped. He did not open his eyes. He was taken to ICU immediately. I haven't my closed my eyes even for a moment since he closed his eyes. I want to let him know that I'm waiting for him, I will not give up on him at any cost." - Anju.

Amit's condition became critical within a span of a week. He had unbearable pain in his abdomen. Amit, as usual, did not share his pain with anyone, not even with his wife knowing that they will panic. It was only when he started throwing up even water, his wife Anju realized that something is wrong but not even in their nightmares they thought it would lead to such a tragedy. Amit needs prolonged ICU stay to recover completely.

"I left my daughters at home and I'm all alone here. I was feeding my 6-month-old baby but I did not have any option but to leave them with their grandparents.  I cannot go back without my husband. He is our life. He has been struggling all his life to take care of his elderly parents and us. I cannot even think what will happen to all of us without him. He deserves a life. He never had any bad habits, he is a very disciplined person and very kind to all. I don't know how fate can be so cruel to us." - Anju.

Anju with Amit's parents and her daughters

Amit was working as a Munshi in the court. He is a hard-working man who took care of his elderly parents, his wife and children.  His wife Anju doesn't remember even a day where he complained of tiredness or stress. He was a man of positivity. It was a big blow to his family when his health collapsed. Their life has come to a standstill and desperately waiting for a miracle to happen.

Amit, the sole breadwinner of his family and the father of two little children is battling for his life due to liver failure. Without Amit, his family has no hope for future, their lives would turn upside down. So far, Amit's relatives and friends were helping with the treatment. They need Rs 12.5 lakh more for the treatment. Anju has no one to turn to help. Amit needs prolonged ICU treatment to recover. Only your support can help this family who is on the verge of losing their pillar of strength.

UPI: givetoamitr@yesbankltd (Copy to clipboard)
Or
Click here to read the instructions before you make a bank transfer. 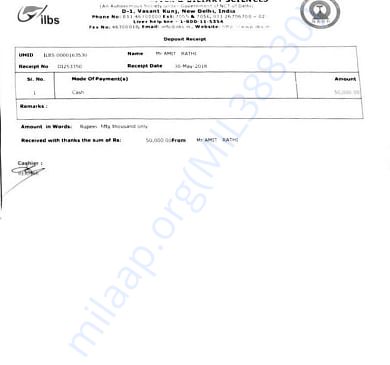 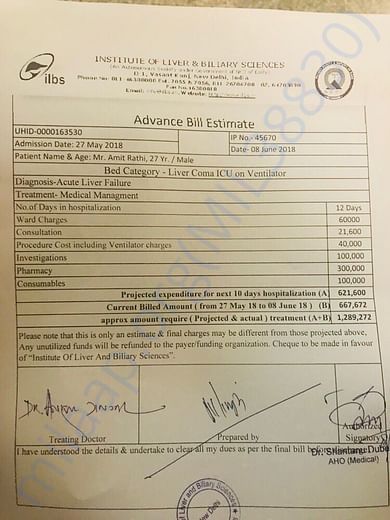 UPI: givetoamitr@yesbankltd (Copy to clipboard)
Or
Click here to read the instructions before you make a bank transfer.

Report fundraiser
See how thousands are crowdfunding for their causes on Milaap
Rs.1,775 raised

G
You are sending a message to
Gaurav
Go back 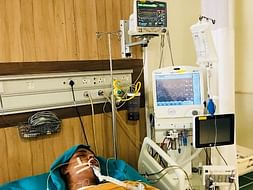