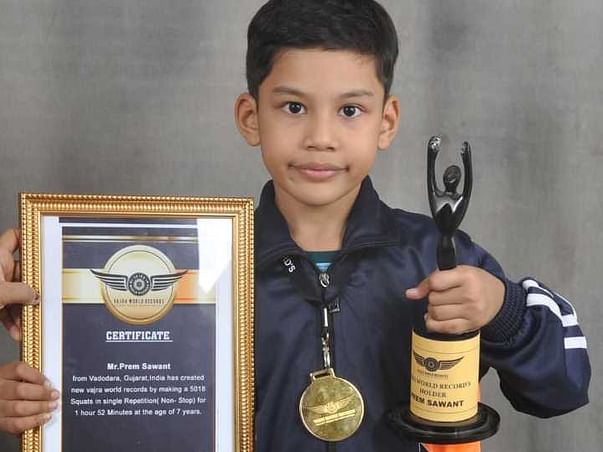 Prem is an inspiration to everyone, that with determination anything can be achieved. He is 2 time world record holder at just a young age of 8 year. He was weak in studies and was regularly beaten by the school teachers which induced a phobia in him. He used to piss in his pants whenever the teacher beat him. His father Babloo Sawant who is a Tai Chi master, member of Olympic committee and president of MMA Gujarat himself was shocked to see his own son in such state. During the same time, his father was still not able to believe that one of his own student did not even acknowledged him during a world record event. Prem who was just a 4 year kid saw what his father had gone through.He decided and told his father that he wanted to become fighter and also break record of maximum squats which belonged to his father's student who broke his trust. In matter of 2 months with the help of crazy dedication, handwork and practice, Prem did the unthinkable 5000 squats in just 1 repetition. Moreover, he didn't stop and went on to do 8000 squats in less than 3 hours without stopping. Prem's zidd knows no limit and now the intensity of his zidd is such that he is going to do 24000 squats within 24 hours which will be an incredible Guiness World Record by a very far margin. Now along with attaining school and facing the world with pride, he trains for hours at his father's MMA institute in Vadodara, Gujarat where his mother counts his repetition and also comfort & condition him to battle constant muscle pain. He has already done 24000 squats in a day 6 times and his father is waiting for sponsors. The objective of doing this world record is to make India proud and to raise fund to help his father achieve his dream of adopting hundreds of kids and train them for world records & professional MMA fighters. In his last interview when asked what he wanted to do, he replied " I want to make my father proud, I want to make India proud and I want to live my life with pride. I also want to meet Akshay Kumar (with innocent smile on his face)".  We keep going. Next!