This 5-year-old boy is fighting a severe brain condition | Milaap
This is a supporting campaign. Contributions made to this campaign will go towards the main campaign.

This 5-year-old boy is fighting a severe brain condition 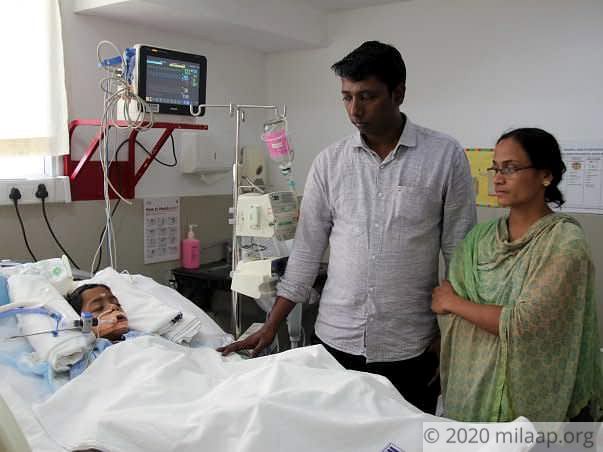 “The morning of his surgery, he was taken in as a cheerful child, but after the surgery they brought him out, looking like all the life had drained out of him. I thought we had lost him. It was only supposed to be a minor procedure, I can’t believe that my son might die because of brain damage now. He doesn’t have much time without treatment.”
Manoj and Sushma rushed their 5-year-old son, Satyajith, from their hometown in Andhra Pradesh to Bangalore after he suffered serious complications in his tonsil removal surgery last month. His brain was completely deprived of oxygen which caused severe brain damage.Satyajith was admitted to the ICU immediately and put on ventilator support. He was unconscious for 10 days before he finally opened his eyes, only to stare blankly. Satyajith is slowly improving, but he needs to stay in the ICU for 3 more weeks to survive
An unfortunate turn of events
It all started as a cold. Satyajith had trouble breathing from his nose, and Sushma decided to take him to an ENT to get checked. When the doctors suggested he needed a small surgery to make it easier for him to breathe, Sushma and Manoj weren’t too worried. Little did they think that their healthy and active child would soon be fighting the biggest battle of his life.

“It was just a cold and a small breathing problem. The surgery was minor and we thought it would make everything okay. Now my son clings to life, while all we can do is stand around watching him. We feel so helpless. I wish we had never agreed to the surgery. At least then he wouldn’t be lying unconscious, on the brink of death.”
After being unconscious for 15 days in the ICU, Satyajith finally woke up 5 days ago but his battle is far from over

“When I saw him for the first time with the ventilator and all the numerous tubes and wires he was plugged on to, I was so scared. Just a few days back, he was running around at home, making noise and making us laugh. Now brain damage has silenced him, and I’m afraid it might be forever. After 10 days of being unconscious, he finally opened his eyes 5 days ago. I don’t think he sees us or knows what’s happening around him. He can slightly move his hands and legs now. The doctors say he’s slowly making progress. We stand by his bed and talk to him, hoping he can hear us and that he knows we’re not giving up on him. We call out to him, but he can’t even respond to us anymore.”
His parents can’t afford to keep him in the ICU any longer
Sushma and Manoj work in an Ayurvedic centre. Satyajith’s condition has not only mentally and emotionally exhausted them, but they don’t even have the means to continue his treatment any longer. They’ve already spent Rs 9 lakhs on his treatment so far with the help of family and friends. However, it’s not enough. Satyajith needs to stay in the ICU under strict medical attention and care for the next 3-4 weeks, for which his parents will need 10 lakhs, an amount too large for them to afford.
How You Can Help
Satyajith has severe brain damage and needs to stay in the ICU till he stabilizes. He’s still on the ventilator support and to stop that will lead to completely damaging his brain. His parents have done all they can to save their son, but now, they’re helpless. Satyajith can be saved with further hospital care and he needs all the help he can get to make it. His distraught parents plead for your support.

Your support will save Satyajit’s life. 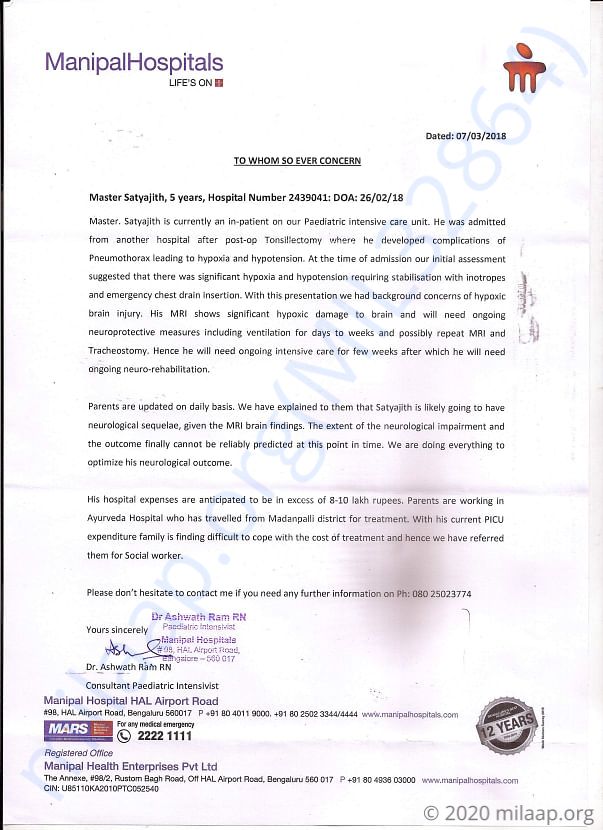 Thank you so much for the support you have shown towards Satyajith so far.

Master Sathyachith is doing well, day by day he is improving lot, slowly the body movement is improving. There are regular followups going on with the doctors.

We are very hopeful for his complete recovery and will keep you posted. 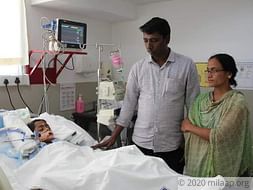 This 5-year-old boy is fighting a severe brain condition