A Rare Disease Has Melted This 24-Yr-Old Chennai Woman’s Face | Milaap
This is a supporting campaign. Contributions made to this campaign will go towards the main campaign.
This campaign has stopped and can no longer accept donations.
Milaap will not charge any fee on your donation to this campaign. 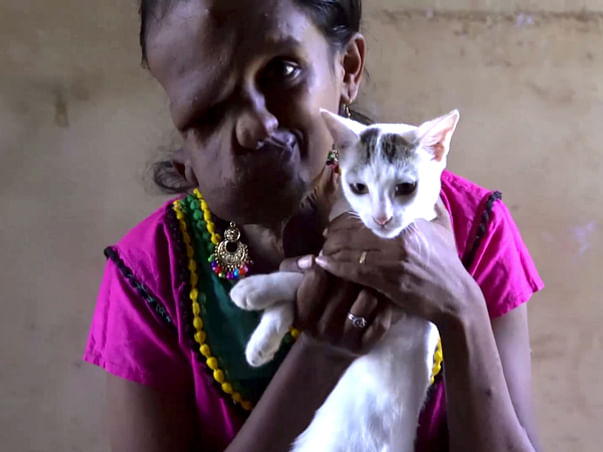 Battling a rare health condition that has left half of her face disfigured, a 24-year-old Indian woman says she tries to live positively despite jeers by people.
Sasikala K, a resident of Chennai, suffers from plexiform neurofibromatosis, which has taken a toll on her face, affecting the right side.

However, she admits her confidence has taken a hit off late.
Sasikala, who prefers to live boldly and does not cover her face, likes dressing up and wearing make-up, much like girls her age, though she finds it difficult to execute them owing to her complications.

She was only six-months-old when her parents noticed a part of her face swelling. However, they waited for another one and a half years to get medical help.

“I have always been very bold, however, with age, the condition progressed and no one has come for help,” she says, adding, “I am slowly losing my confidence.”

According to medical experts, her condition affects the face and craniofacial region of the body. It can also affect the neck and other parts of the body, depending upon the host.

The family had not considered the deformity to be a big issue until Sasikala turned six and the face started to swell at an unusual rate.

Now, almost 18 years later, she finds it difficult to execute daily chores like eating and brushing.

The 24-year old is an employee at an embroidery unit run by a trust. Sasikala took it up as a means to support her family after completing her diploma in nursing and unable to land a job in the hospitality sector.

Kumar, 54, Sasikala’s father, says his daughter has been under the knife four times, but it has only gotten worse. “She was six when doctors operated upon her for the first time,” Kumar says.

“The result was satisfying and she looked normal,” he added. However, the joy was short-lived, as the tumours grew back again.

Kumar says upon approaching the doctors again, he was told that it could be controlled but would require medical intervention frequently, something the family couldn’t afford.

Sasikala's father works as a porter and earns only Rs 9,000 (USD 125.73) a month. “With my paltry income, I support the family of four,” says Kumar whose wife died eight years ago.

“She wanted to study more after completing her high school and I facilitated that and enrolled her in a nursing diploma programme.” The man also rued the lack of empathy from others as his daughter found it difficult to find employment as a nurse.

“Not even medicine shops were willing to hire her, fearing her appearance would scare away customers,” the 54-year-old says.

Sasikala, however, is determined and has never been deterred despite her ungainly appearance. She has also found fame on video streaming app TikTok, where more than 7,000 people have subscribed to her feeds.

“People have made fun of me, but I don’t hold back,” she says.

“Once a man cracked jokes about my looks and mocked me to which I said I was able to complete my education and get a job with this feature,” she adds.

Despite the unfailing spirit, the family knows a tough battle awaits them.

The condition with its ever-growing nature has already left a part of her face disfigured. Now, it’s taking a toll on the right eye and ear.

Sasikala fears an escalation might prematurely end her embroidery career, as her sight weakens.

Meanwhile, all hope is not lost as health experts say her condition can be bettered if not cured completely.

Doctor says only 70 percent of the patient’s original face can be restored, however, will take rigorous treatment.

“Her previous surgeries have affected her facial nerve,” the doctor says.

Following a thorough check-up, the doctor says a two-stage procedure might improve Sasikala’s life.
“We can go for a debulking in the first stage of the operation. It will improve her right eyelid movement. Later, a sling [Fascia Lata Sling] can prove beneficial for her face,” Doctor adds.

The complete procedure will cost the family a whopping 7 to 8 lakh Indian Rupees .

Kumar says he fears for his daughter’s health even more with each passing day.

“I have a younger son who works as a mechanic and another who is a high school student. I fear they will move out on their own and will not look after her [Sasikala] when I’m not there anymore,” says the worried father.

“I feel her pain while she eats her food. It takes her a long time to finish her lunch. That is when I know the situation is getting worse,” Kumar says.

“I want her to settle down just like any other girl and I will be very happy,” the father adds.
However, Sasikala has no desire to marry.

“I am not looking for a partner. I just want to have a normal life, please help me” she says. 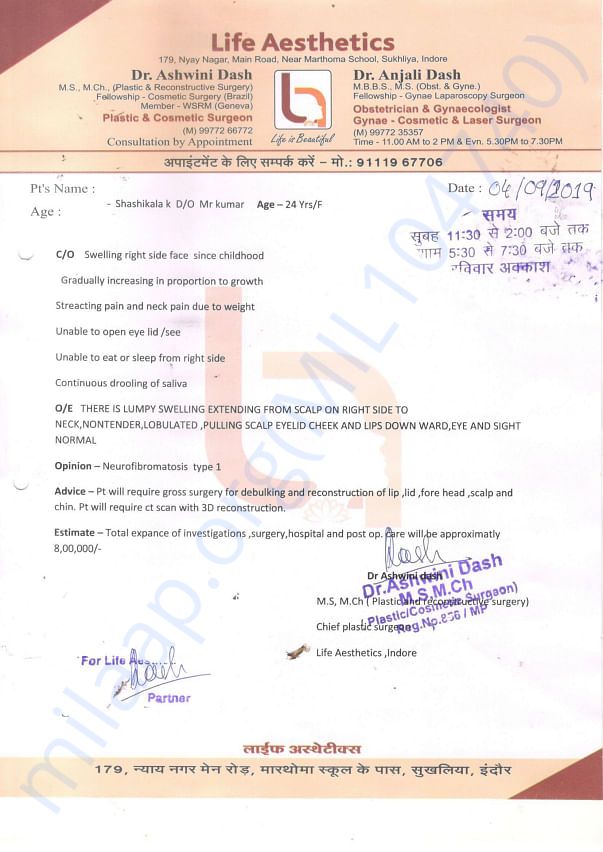 We are glad to inform that Sasikala K has successfully completed the surgery on Saturday. The surgery has been done to remove three tumors. She will be discharged in  next 7 days.

We are glad to inform you that Sasikala has been admitted to hospital and is scheduled to undergo surgery on Wednesday.

Thanks for your help and support.

We can't thank you enough for the support. We never expected such overwhelming support in such a short time. Sasikala will soon meet Dr Dash in Indore to decide on the next steps of treatment. We will keep you posted about her progress.

Your love and support motivate us to bring out stories of women like Sasikala. Recently, we came across the story of 22-year-old Asha who is suffering from facial tumour.

She lives in Dhanbad, Jharkand with her mother who works as domestic help. Like Sasikala, Asha has been ostracized for her looks and struggles for support to undergo treatment. Any excess funds after meeting the medical expenses of Sasikala will be utilised for Asha's treatment. We shall provide a detailed update on the use of funds before doing so.

We require your support to share her story and gather as much support as possible for her treatment.

Scan & donate with any app
check_circle_outline Download payment receipt
Report fundraiser
Know someone in need of funds for a medical emergency? Refer to us
Rs.19,324 raised

9 Supporters expand_more
This campaign has stopped and can no longer accept donations.
$150 Million +
Raised on Milaap
Are you in need of financial support for medical or personal emergencies, or a social cause?
Start a fundraiser
Or
Know someone in need of funds for a medical emergency? Refer to us
Campaign organizer contact_mail

God bless you, get well soon !!

You will be fine soon..

U will be all right

God bless you, get well soon !!

You will be fine soon..

U will be all right 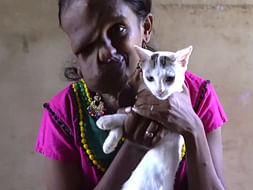