Mother Struggles To Save 8-Year-Old Who Lost An Organ, Needs Help | Milaap
This is a supporting campaign. Contributions made to this campaign will go towards the main campaign.

Mother Struggles To Save 8-Year-Old Who Lost An Organ, Needs Help 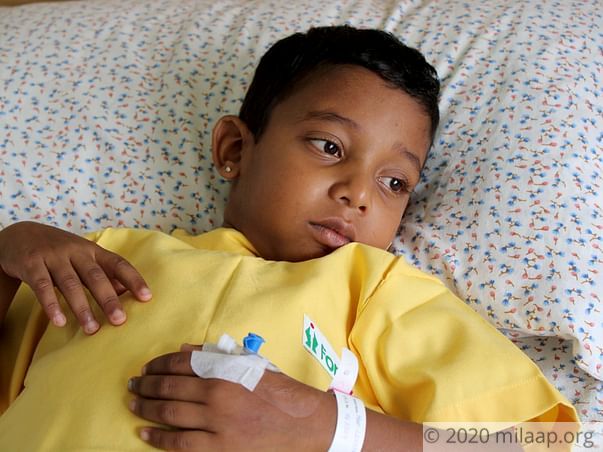 Likith who suffers from a genetic blood disease survived only with the help of regular blood transfusions since his childhood but the treatment which kept him alive for years has now turned to be dangerous for him. Due to years of transfusions, there is excess iron accumulation in his body. His spleen which was affected first due to this had to be removed. Now he lives without an organ in his body which increases the risk of severe infections because of weak immunity. He is in a helpless situation. If the transfusions are stopped, he will not survive the disease, but if he continues with it, his other vital organs will be affected. This poor kid waits for the permanent solution- a transplant, that his parents cannot afford.

Anusuya and Manjesh's prayers were answered when Likith was born. They promised to work hard for his future. But within 6 months of the birth of their child, they knew he was born with a blood disease that could take away his life.

When Likith was 6 months old, he suffered a high fever and despite taking medicines his health only deteriorated. When he was taken to a private hospital he was diagnosed with Thalassemia major, a blood disease in which the body makes an abnormal form or inadequate amount of hemoglobin. Ever since then, his life has changed and he was undergoing a blood transfusion once a month. When he was 8-year-old, his stomach started swelling and slowly his whole body too. His parents rushed him to the hospital and doctors said that his spleen has to be removed at the earliest to save his life.

When he was 8-year-old, his stomach started swelling and slowly his whole body too. His parents rushed him to the hospital and doctors said that his spleen was affected to excess iron and it has to be removed at the earliest to save his life.

"My son has known only pain from the moment he is born. He spent more time in hospitals than at home and school. He loves to play outdoors but the disease restricts him to bed. As a mother it hurts me to watch my son not able to do something he really wants to, even small things like playing with his friends. At times, he hugs me tightly and cries out loudly saying ‘why can’t I play happily like others?’. How can I give him an answer.” - Anusuya.

Likith has a risk of severe infections because he lost his spleen. According to this doctors, his primary disease- thalassemia needs to be cured urgently with a bone marrow transplant.

Fortunately, a donor has been identified for his transplant but his poor parents cannot afford the transplant.

Despite selling the only piece of land they ever owned, this family is unable to save their son

Manjesh is a daily wage laborer who works on a farm. He barely earns Rs 250 per day, whereas daily medication costs around Rs 500 a day. With a family of five to feed and intense medication for one child, this couple is overwhelmed with the expense of the surgery. They have sold the only piece of land they ever had. They have spent all their savings and have also borrowed money from their relatives. They have spent 10 lakhs until now. They have exhausted all the money and cannot save their son from this dreadful disease. The life-saving transplant will cost 35 lakhs which is beyond their means.

This 8-year-old is battling for life every day since childhood. He is suffering from a severe form of blood disease and is prone to infections. He is living on blood transfusion which can turn fatal with excess iron content. He needs an urgent bone marrow transplant to survive. The poor parents have nothing left to save their son.

UPI: rzpy.givetomlplikithgo004@hdfcbank (Copy to clipboard)
Or
Click here to read the instructions before you make a bank transfer. 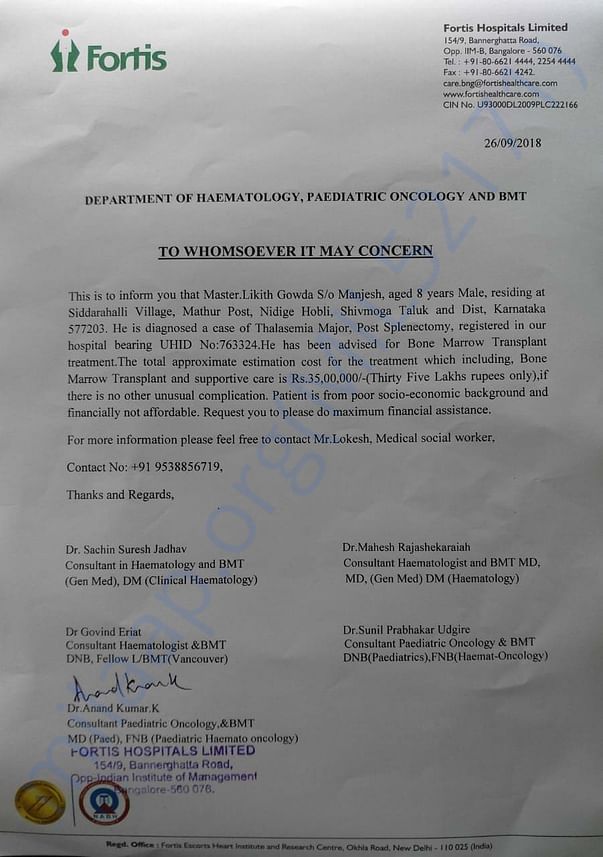 UPI: rzpy.givetomlplikithgo004@hdfcbank (Copy to clipboard)
Or
Click here to read the instructions before you make a bank transfer.

Likhit is doing well. Likith is going under treatment and is responding well to him treatment. He is currently at home and visits hospital for his regular follow ups.

Likith is at home now. He is undergoinghis  3rd set of chemotherapy. He is underwent blood tests and are waiting for the blood test report. Once the report is ready further set of treatment will be decided. As of now, there are no side effects.

Thank you for the love and support shown towards Likith.

He is presently in the hospital and is undergoing treatment preparing him for the bone marrow transplant scheduled in December. The potential donor will be from the donors list as no one in the family is a match for Likith.

He has finished 2 rounds of chemotherapy and has to undergo chemotherapy once in every 15 days.  Luckily, he hasn't had any severe side effects to the chemotherapy.

Please share this campaign with as many people as you can to help Likith!

Donated to this campaign via Paytm? Click here if you can’t find your donation listed below.
A
Anonymous donated Rs.7,500
KK
Kruthi donated Rs.1,000

Donated to this campaign via Paytm? Click here if you can’t find your donation listed below.
A
Anonymous donated Rs.7,500
KK
Kruthi donated Rs.1,000

You are sending a message to
sandeep reddy
Go back 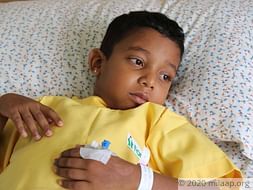 Mother Struggles To Save 8-Year-Old Who Lost An Organ, Needs Help