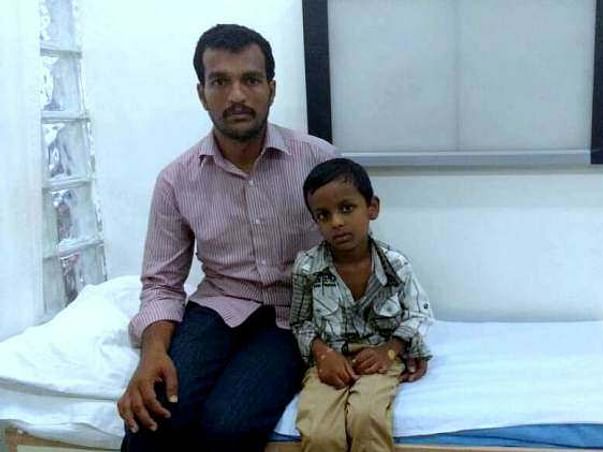 Share
8-Year Old with Agressive Bone Cancer
It was just a month ago when SamJeevan was diagnosed with cancer for the first time. SamJeevan is just an eight-year-old with aggressive form of cancer. His parents have taken him to several hospitals, finally landing up at HCG, Bangalore. All he needs is hope and support to make a stand against this deadly disease.
The Family
Guru is a daily wage laborer in the village, earning Rs 400 a day. “30% of my salary goes on the rent. And with the remaining, I am struggling hard to bear all the other expenses. My savings is almost negligible and I am still settling the debts”

It was one of those evenings, when 1-year-old SamJeevan was engrossed in playing with his friends. He casually fell on the ground and nobody thought that this could give rise to series of complications. After a couple of months, the swelling in his right hand increased tremendously, the pain aggravated leading to minimize his hand movements. When they rushed the infant to the local hospital, tests revealed that he had a malignant tumor.
Guru took a loan of Rs 50,000 from money lenders, for SamJeevan's surgery. And by God’s grace, the operation was successful. The family was relieved hoping that all his problems were vanished and thought that lady luck was smiling on them. “Since childhood, my baby has been suffering. Being a premature baby, SamJeevan was ventilated in the Neonatal Intensive Care Unit (NICU) for almost 2 weeks. And hardly could I get a proper glimpse of him” – Indira.

The operation not only corrected his hand problem, but also gave him a new life. He started going to school. And he became happier with his newly born baby. Financial difficulties persisted, but the parents were doing their best to make both ends meet. But last March, SamJeevan again developed a serious health problem. This time along with the swelling in the right hand, he got unusual marks in the wrist. And he complained of extreme pain too.

“My son underwent many tests; however the doctors were not sure of the cancer. SamJeevan was by then already sick of being in the hospital. He wanted to go back home, eat home-made food and attend the Sunday morning prayers at the church. During his treatment in Mangalore, the doctor said if we take him to any govt hospital, the doctors would suggest for an amputation. Otherwise, we only have another option to take him to HCG, Bangalore. I knew, it would be costly to undergo the treatment here. But is that a choice a parent can make?” asks Indira. Both the parents are praying so that they are somehow able to save their son.

Taking care of a child with cancer is difficult. Despite the odds, Indira and Guru are very clear on ensuring the best care for SamJeevan. They have coped with the situation by becoming spiritual. The father has been struggling hard to arrange money for the child. They have completely exhausted whatever minimal savings they had and now they are at a loss of resources to save him.