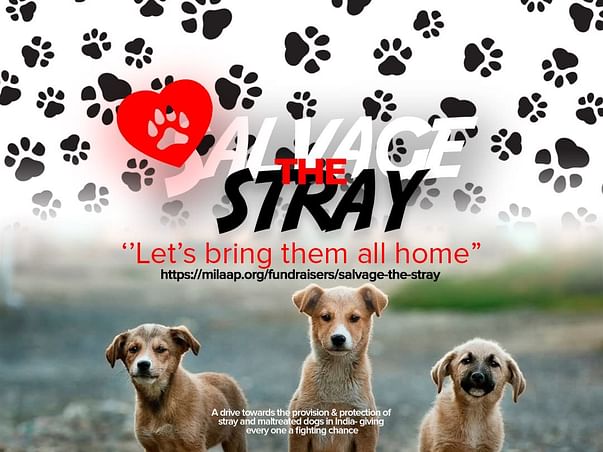 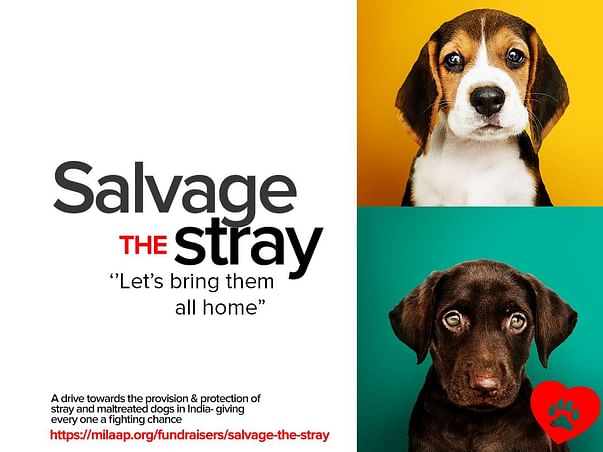 SALVAGE THE STRAY
"The love of a dog is a true thing. He gives you a trust which is total. You must not betray it." ─ Michel Houellebecq

In countries like contemporary India, dogs continued to be killed by the locals and the authorities in response to the various complaints. Despite the multiple controls and efforts in the eradication of stray dogs from the streets, there was no significant difference to their population size and also the incidence of rabies attack on humans. Deaths and severe injuries on these animals have risen due to cruelty. Should these animals be blamed for their inability to own homes for themselves? What provision has been given to these stray animals?

The country India is known to be a place of dwelling for over thirty million stray dogs, and an estimated twenty thousand people die each year from rabies infections. Measures taken in past years like the sterilizing of the dogs have not worked in the past due to the limited supply of adequate resources. It has caused the animal versus social marginalization and feud as there are increased killings and public outrage against these animals.
FACTORS CAUSING THE STRAY DOGS INCIDENTS IN INDIA

Various outlying factors necessitates the widespread of stray dogs in India. A common factor is open garbage, which is common in cities and even the rural areas in India. Due to their scavenging nature, dogs solely rely on waste on the street to source for their food. Consequently, they become susceptible to various conditions that affect their health. They become exposed to diseases and other infections, which causes increased mortality rate for the dogs and those they bite.

Likewise, the fewer services that have been rendered by the government and also the Non-Governmental Organizations has also increased the rate by which stray dogs are roaming the streets and even their cruel living. Furthermore, organizations like the People for the Ethical Treatment of Animals have argued that a major leading cause of stray dogs in the streets in India is their migration and breeding patterns.

Consequently, the inhabitants of India see these stray dogs as dangerous animals and take death to be their punishment. Also, sterilizing the millions of stray dogs has become nearly impossible, and the unsterilized stray dogs then spread due to migration and even mating.
CONSEQUENCES OF STRAY DOGS PROBLEMS IN INDIA

There are various effects of the stray dogs in not only the Indian territory but in affected places also. Amongst them in India is the financial strain on the governmental agencies, the Non-Governmental Organizations and the people of India. Due to the continuous increase of stray dogs in the beautiful streets of India, various cases of bites have been reported over the years, as stated earlier. In a bid for reduction of these attacks, several measures have been adopted, which has caused an enormous strain in the finances and workforce. Some, due to their frustrations take it out on these poor creatures like they should be able to provide for their groups or themselves.

Aside from this, property vandalizing has also been on the increase, likewise a large number of vehicle accidents. Due to their roaming nature, various incidents of vehicle collision occurs with stray dogs. In some cases, the dogs are the victim, and in some, the vehicle which was involved in the crash becomes the victim of dents or accidents. In some instances, this results in unplanned and unwanted spending of money.
REMEDY FOR SALVAGING STRAY DOGS FROM HUMAN CRUELTY

Despite the 2015 declaration from the Supreme Court that all states in India should adhere to the law of no killing of stray dogs in India, there were still incidents of animal cruelty from various parts of the country. For instance, is the unidentified man who was caught on a CCTV attacking a dog and cruelly killing the pup of the dog. Likewise, in the northern state of Uttar Pradesh where a man intently poured acid on the mother of five puppies and the puppies themselves. So many cases like this are still on the rise. A major one is the dog-genocide of over fifty community stray dogs that were poisoned with pesticide and burned alive in Tamil Nadu, South-Eastern India.

Although the culture in India speaks on the same soul that resides in humans and is similar to the same that lives in animals, those that practice this in India have turned deaf ears to this particular teaching. What measures can be taken to help these poor creatures from the several cruel prejudices which they face?

We have drawn and analyzed several enlightening programs that when we implement them, there is a guarantee that it will be beneficial to the street dogs and the inhabitants of India. Measures like raising awareness for the ill-treatment the street dogs are facing on a daily dose will be made and taken to the streets and also to the government. Part of the consciousness planned by us is kicking of well-developed presentations in several districts or places in the country.

Asides from changing the mindset and actions of the public towards stray dogs as being unwanted or taboos, the organization is also charged in the promotion of stray dogs’ adoption. Stray dogs’ adoption as pets can be implemented and promoted with the unique tools which the team wishes to adopt. However, for this to occur, there is a need for the sterilization of the beautiful creatures and the proper funds to help finance several planned exercises.
We intend to provide food, shelter, veterinary care, vaccinations, spaying/neutering, medications, e-collars, and rescue services. Together we can achieve this! Below are the expenses for 25 dogs in a month:
*Food Cost: $2,500.00
*Medical Cost: $1,250.00
*Shelter & Equipment: $600.00
*Staff & Volunteers Cost: $400.00
*Miscellaneous: $250.00
Total: $5,000.00

There's no better time to save these dogs. They've got life in them, and they deserve protection. We need to work together to make the streets of India free from these dogs by giving them food and shelter. With your help and our help, the dogs of India will get saved! They are known to be man's best friend, and it shouldn't change now! Through our milaap.org crowdfunding platform, the stated objectives for the Salvage the Stray campaign can be indeed achieved.

UPI: rzpy.givetomlpsoumen00001@hdfcbank (Copy to clipboard)
Or
Click here to read the instructions before you make a bank transfer.

You are sending a message to
Soumen Singha
Go back 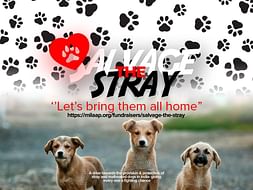