This 10-Year-Old Begs To Go Home From The Cancer Ward, He Needs Help | Milaap
This is a supporting campaign. Contributions made to this campaign will go towards the main campaign.

This 10-Year-Old Begs To Go Home From The Cancer Ward, He Needs Help 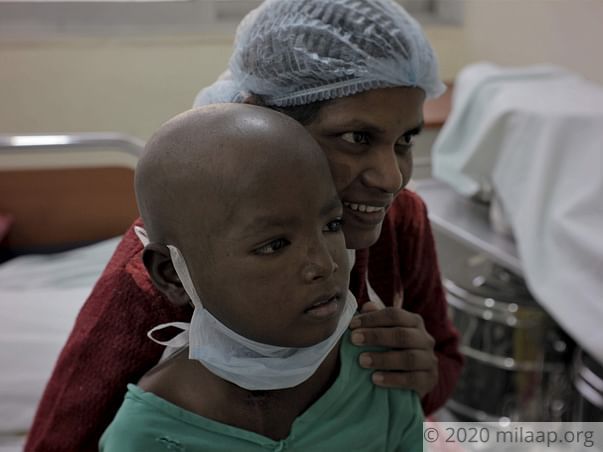 “Is today the day we’re finally leaving?” an equally weak and excited Sairaj asks his mother. “Not today, son. But soon, when you get better…”, Savitha reassures him. But his mother’s words do not pacify Sai. He screams, asking her, “How much longer, Ma? I cannot deal with the smell of medicines and pain of injections anymore!”

Sai was suffering from a severe blood disease since birth for which he recently underwent a bone marrow transplant and is suffering from post-transplant complications now. His parents have exhausted the last paisa in their savings, and cannot afford to save him.

Needles and pain is a way of life for this smart kid, but he can't take it anymore

Sai was born seemingly healthy and his parents, Savitha and Rakamaji, did not have any reason to believe that he had any problem. But when he was 10 days old, his father noticed that he would sleep in the same position for long, and not respond to calls or clicking of fingers. He was taken to a doctor, who, after a series of blood tests diagnosed the baby with thalassemia, a blood disease where the body produces abnormally lower amounts of hemoglobin. He has surviving on regular blood transfusions (every 15 days) since then.

“Despite suffering from a disease that weakens and exhausts you whenever the blood levels drop, Sai was unstoppable. He never let it come in between his academic and extra-curricular achievements. He is a topper in class, excels in cricket, chess, caroms, hockey and public speaking. Every 15 days, he would calmly go to the doctor, get his transfusions done and come home like it's normal. But now he is totally fed up of needles and the hospital environment,”- Savitha

Rakamaji, a sub-inspector with Maharashtra police, had read somewhere that children suffering from thalassemia had a short life span. This worried him and he made it his life’s ambition to make sure that his brilliant, loving son outlives him and becomes successful, at whatever he chose to do. After consulting with doctors, he understood that a bone marrow transplant is the only way his wish could be fulfilled, but the costs, he knew, were too high for him to finance on his own.

After going to many NGOs and charitable organisations, he was able to garner the financial help he needed and Sairaj underwent the transplant last month. His parents were relieved and the family was looking forward to a bright new chapter in their life. “We even went home soon after the transplant – everything was looking good, but within 4 days everything spiraled out of control again. His bp levels dipped, and he got violent seizures. Now, he needs expensive injections to survive,” says Rakamaji.

“Many people hold misconceptions about the police. They think we are very rich and have notes overflowing from our pockets. This is hardly true - we are the ones who help people in need, 24/7, and we don’t credit for our work,” laments Rakamaji saying that many people refused to help him when they learnt that he was in the police. “The charity that helped us finance the transplant is now saying that we have exceeded our spending limits. I am on unpaid leave from the past 3 months. We have no money for food, let alone his injections and medicines (whose costs can come up to Rs 20,000 per day).”

Little Sairaj needs at least 15 more days of treatment to become alright. He constantly begs Rakamaji and Savitha to take him home, because his body and mind cannot take any more pain and suffering. His father has no way to pay for hospital expenses, but he has not lost hope. Being a Sai devotee, he believes people will understand his plight and help his son get better.

Your kind contribution can save Sairaj

UPI: givetorakamajigaikwad4@yesbankltd (Copy to clipboard)
Or
Click here to read the instructions before you make a bank transfer. 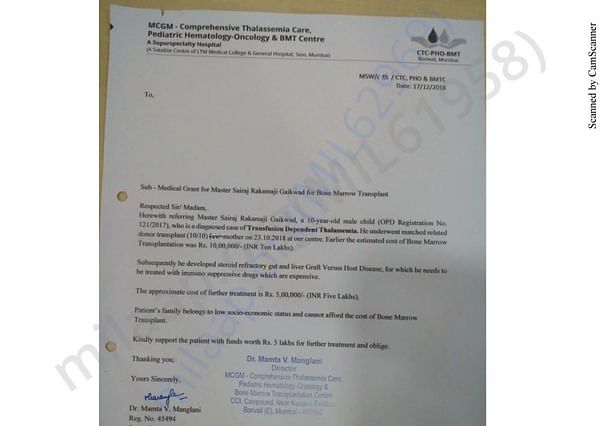 UPI: givetorakamajigaikwad4@yesbankltd (Copy to clipboard)
Or
Click here to read the instructions before you make a bank transfer.

We would like to inform you that Sairaj is doing fine now and is at home. He has to visit the hospital for regular follow ups. He is still under medication and the supervision of the doctors.

Sairaj has been discharged from hospital but he has been visiting the hospital for infections. He had a complication called  GvHD which is common for a bone marrow transplant.

He is doing fine now and we are giving a regular check-in to the doctor once every month.

Again Thank You all for the support

A big thank you to all of you for the love and support.

Sairaj is presently in the BMT unit and will be discharged once he completes 3 weeks of the same. Post discharge he has to visit the hospital for regular checkups and medication for a year or more.

Please pray for his health and share the campaign. 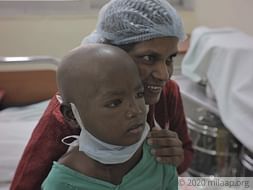 This 10-Year-Old Begs To Go Home From The Cancer Ward, He Needs Help