Venkatesh Naik is a 45 year old man who used to work at a factory in Davangere called Green Agropak Pvt Ltd. Belonging to a middle class family and being the sole bread earner, he had been working extremely hard to take care of his family. However, things turned out to be extremely difficult when he developed a medical condition called as SMA thrombosis.

His small intestine had to be removed

SMA thrombosis is a rare condition where blood does not flow to the intestine. Venkatesh had abdominal pain and this condition had badly affected his small intestine. It became gangrenous and he had to undergo an emergency life saving operation to get his entire small intestine removed.

He still needs a transplant to survive

In order to survive, he needs Total Parenteral Nutrition for the next two months and then he has to undergo a Diseased Donor - Small Bowel Transplant. This means that his small intestine will have to be replaced. This will then be followed by post operative treatment.

How you can help save Venkatesh

The total cost for this operation and treatment to replace his small intestine is about Rs. 30 Lakh. As a part of the maintenance department of his factory, Venkatesh managed to earn only about Rs. 17000/- per month. With this salary he used to support his two student children and elderly parents. This also means that he is not in a position to afford the transplant. He needs your help in order to get better and continue supporting his family. Please contribute to help Venkatesh survive. Your support will give hope to him and his family. 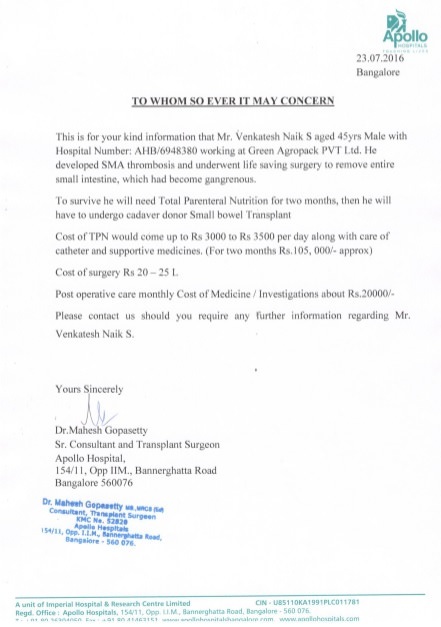