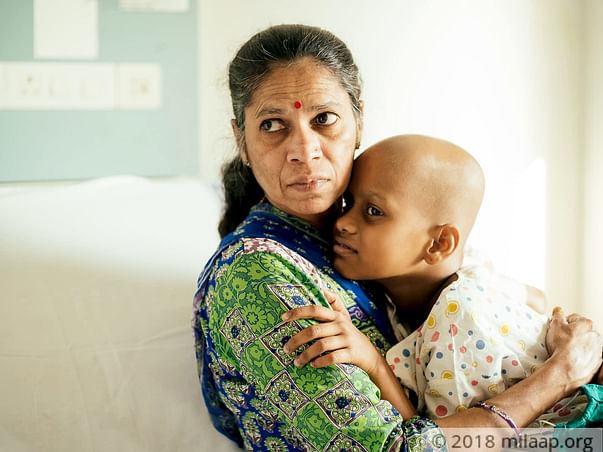 Little Rutuja spent 5 months in the cancer ward. The only way she saw the world then, was through the glass windows in the ward. Every time her brother, Bhaskar entered her ward, she used to ask him to take her to the big glass window in the room. She would stand there for long, enjoying the sunlight that fell on her face, with a big smile.  She'd point at kids running around and tell her mother "When I go home, I am going to play at the beach one full day". Her poor mother knows that Rutuja's blood cancer is still killing her slowly and she will not live long if she stops her treatment. While her parents struggle to afford her treatment, little Rutuja dreams of the day she can stand at the beach and feel the waves run through her feet.

Rutuja and her family live in Goa. Rutuja's father, Ramakrishna works as an accountant. The family also manages a small Kirana shop to support Rituja and her brother, Bhaskar's education. Rutuja loves the beaches in her place. She loves chasing the crabs and burying her feet in the sand when the waves hit her feet. Her family was doing well with whatever they made and they were happy to have each other.

News of Rutuja's cancer came as a shock to the family and they are now desperately struggling to save their daughter's life.

The poor parents took her to a hospital, 600 kilometers away to diagnose her condition

When Rutuja was down with a fever for almost a week, Ranjana and Ramakrishna took her to the local doctors. But even after 10 days, the medicines didn't seem to work and there was no diagnosis. Seeing her condition deteriorating, doctors recommended taking Ranjana to a better hospital in Mumbai. After several tests, they were told that their little daughter has Acute Myeloid Leukemia, a dangerous form of blood cancer with rapid growth of abnormal cells that build up in the bone marrow and blood.

“The last time I had seen her laugh happily was in the month of June. She had gone to school in a color dress because it was her birthday. Soon after that, she fell so sick. Within a week, she was down with 104 degrees of fever and we had to take her to the hospital. Ranjana, 9-year-old Rutuja’s mother.

Doctors put Rutuja on chemotherapy to be cancer-free. The little girl fought well for 5 months. Whenever she felt sad, her brother reminded her about the beaches near their house. She longed to go home and play at the beach.

“Rutuja has always been very close to her brother, Bhaskar. Sometimes, just to see his sister smile, he skips college and secretly brings her chocolates. Bhaskar is the one who gives his sister the strength to keep fighting.”- Ranjana, mother.

Despite 5 months of struggle, Rutuja is not free from cancer

When her mother, Ranjana told her that she is going home after 5 months of treatment at the hospital, poor Rutuja thought she is all fine and going home. Rutuja didn't know that she is going home only to return to the hospital frequently for her chemotherapy. Even at home, she feels like she is in the cancer ward. She still can't feel the waves hit her feet. The beach looks far away through her window and so does her dreams of going out to play.

After Rutuja was diagnosed with cancer, the family has exhausted all that they had. They have spent Rs 20 lakhs in just 5 months. They had to borrow from all the neighbors. Arranging another Rs 25-30 lakhs for Rutuja's ongoing chemotherapy is just impossible for the family now.

9-year-old Rutuja has been suffering from blood cancer for the past 5 months. She spent 5 months in the hospital with the hope that she can go home but the family has exhausted all their savings and has borrowed so much that they have nothing left to save her life. Without your support, little Rutuja will lose her life to deadly blood cancer. 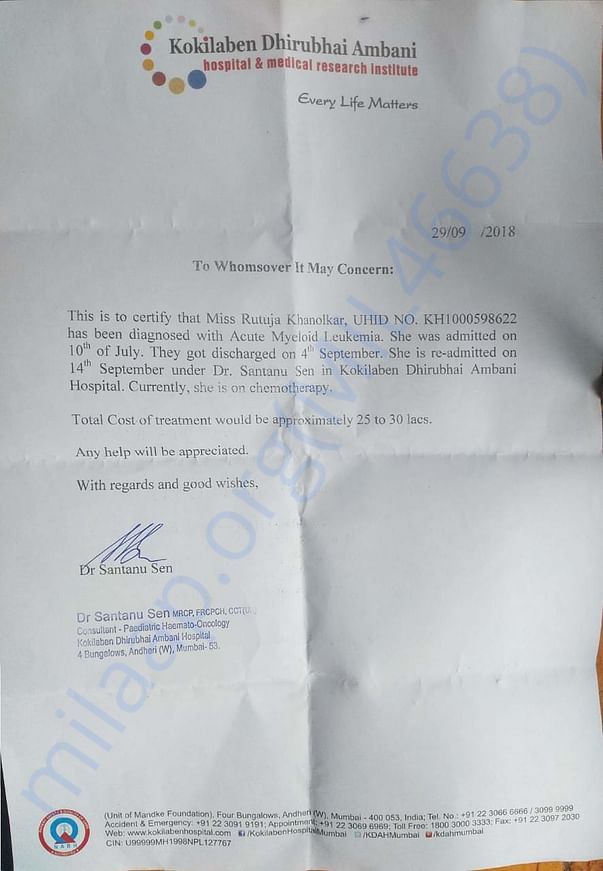 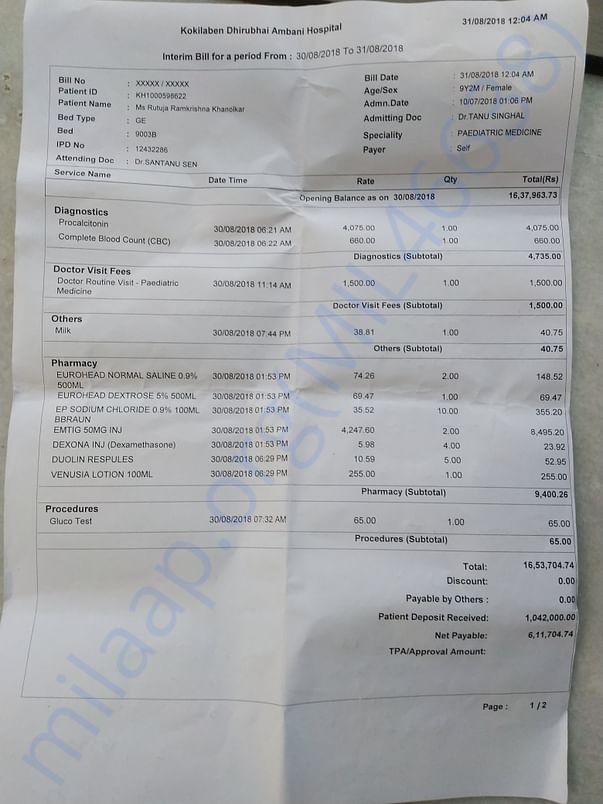 Rutuja is alright now and has totally recovered. We thank you all for your prayers and support!

Rutuja is doing very well and she'll be taken to hospital for a monthly checkup on Monday.

Thank you for all the support!
Dear Supporters,

Thank you for the wonderful support. Here is a quick update on Rutuja's health. She has been hospitalised recently as her blood count was fluctuating. Please pray for her health and speedy recovery. Will keep you posted.

Scan & donate with any app
check_circle_outline Download payment receipt
Report fundraiser
See how thousands are crowdfunding for their causes on Milaap
Rs.1,245,615 raised

Wish you a speedy recovery!!

Wish you a speedy recovery!!

You are sending a message to
Bhaskar
Go back 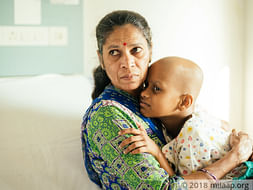