Without Treatment 12-Year-Old Will Be Paralyzed Because of Cancer | Milaap
This is a supporting campaign. Contributions made to this campaign will go towards the main campaign.

Without Treatment 12-Year-Old Will Be Paralyzed Because of Cancer 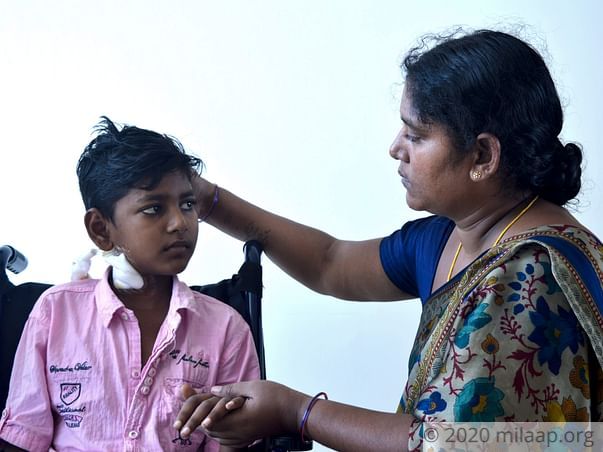 “Roju had come home for the holidays just the day before. He could never go back to school after the break. When he tried to get up, he began to shake and fall. His legs weakened and couldn't fully support him. His life changed in a day.” - says Pushpa, Roju's mother.

12-year-old Roju Paul studies in the 8th grade in a government school outside his village near Ongole, in Andhra Pradesh. He was a bright student, and had come back home for his summer break, with his elder siblings. The very next day he woke up with a high fever. His family suspected it to be a heat stroke and gave him some over the counter medication. But by the evening he had begun to slowly lose movement in his legs.

When Roju's condition deteriorated, his poor parents rushed him to Hyderabad but couldn't find help there

His parents, Yesudas and Pushpa, rushed him to the doctor in their village. He quickly realised it was a serious issue and sent them to the government hospital in Ongole. There, the doctors initially ran tests for malaria, but the reports came negative. They prescribed medicines for fever and sent him to Hyderabad for further treatment. There the hospitals were too expensive for Roju’s family and his condition was constantly getting worse. By the next day, he had completely lost movement in his legs, they were feeling numb and lifeless, and Roju was getting increasingly scared of becoming paralysed.

Finally it was in Guntur that he was diagnosed with acute blood cancer, but had to be moved to a better hospital in Vijayawada soon

Not willing to take anymore chances with this health, they rushed him to Guntur. At Guntur , their consulting doctor suspected leukemia for the first time and told them that their hospital is not equipped to take care of him, she advised them to immediately take him to Manipal hospital in Vijayawada, where there were enough facilities to evaluate his condition and give him proper medical aid.

“When the doctors told us that it could be cancer, we panicked. We didn't know what to do. We immediately called our relatives and asked someone to meet us at the Manipal hospital. His cousin Raghava came there with some money, and stayed back to help us. By then Roju was admitted and tests were being conducted to diagnose his condition.” - Pushpa

Roju was diagnosed with leukemia at Manipal, confirming his parents’ worst fears. They were afraid that their children might get too scared and breakdown by hearing of cancer. Roju’s siblings - Yamini and Lukapal think their brother is admitted to the hospital for a blood infection. They visited him in the hospital once before they left for the hostel after the break. Roju himself thinks he is being treated for paralysis, since he had lost movement in his legs initially.

Though he is able to walk with aid now, he still needs prolonged treatment to get cured of cancer

At Manipal, without wasting further time, his treatment started. He has undergone 6 sessions of chemotherapy so far and needs to be under treatment in order to be completely cured of cancer. He has even started walking again with the help of a walker and with support from his parents. Sadly his parents can’t afford the expensive treatment anymore and without the chemotherapy sessions, Roju will succumb to his condition.

So far towards Roju’s treatment, his family has spent over Rs 3 lakhs. Yesudas works as a farm labourer with a monthly income of about Rs 1500-2000. Within that income they have to pay for their food, their children’s school fees and other household expenses. They borrowed money from their friends and relatives to pay for Roju’s treatment, but now even that money has run out and they don’t have any means to afford further treatment.

Roju has a high chance of survival if he gets prolonged chemotherapy. He doesn’t deserve to die an untimely death due to his parents’ poor financial condition. Only your help can get him to recover and every contribution will make a difference between life and death for Roju.

UPI: givetoyesu2@yesbankltd (Copy to clipboard)
Or
Click here to read the instructions before you make a bank transfer. 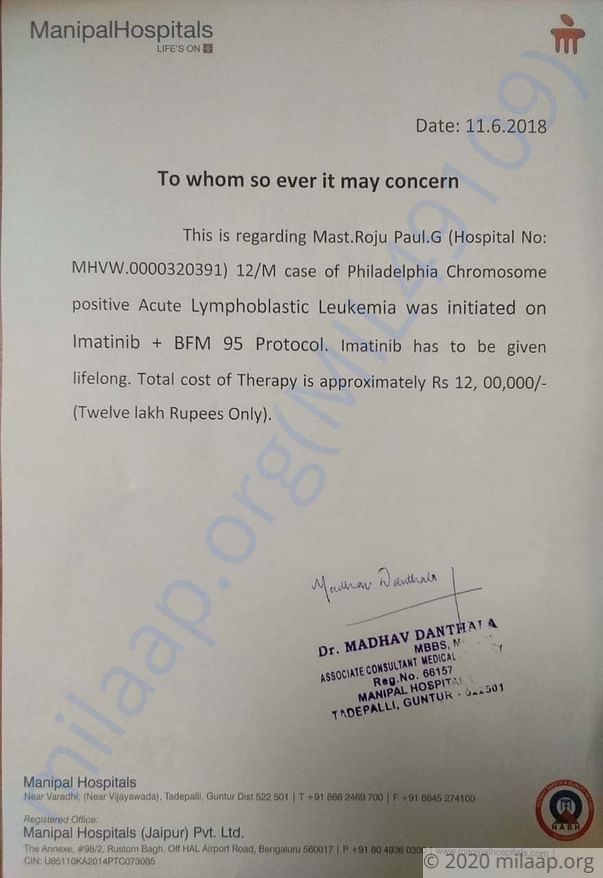 UPI: givetoyesu2@yesbankltd (Copy to clipboard)
Or
Click here to read the instructions before you make a bank transfer.

We thank you for your love and support.

Roju is doing fine. Every four weeks we are going for blood tests and if the blood count platelets are low then we need to rush to the hospital but we did not have a problem till now.

Again, thank You all for the support.

Thank you for the love and support shown towards Roju.

We request you to continue to support him by sharing his campaign with your friends and family!

Thank you for your generosity towards Roju.

He has been prescribed medications for now, doctors say he must take them throughout his life without which his condition might worsen. Unfortunately, he's having side effects of vomiting and headaches due to these medications.

Please continue to pray for his good health and share the campaign. Thank you all for the love and support.

Donated to this campaign via Paytm? Click here if you can’t find your donation listed below.
MA
Milaap Ammisetty Funds donated Rs.100,000

Donated to this campaign via Paytm? Click here if you can’t find your donation listed below.
MA
Milaap Ammisetty Funds donated Rs.100,000 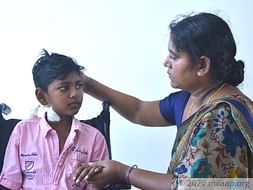 Without Treatment 12-Year-Old Will Be Paralyzed Because of Cancer