This Girl's Whole Body Got Burnt While Bursting Crackers, Needs Help | Milaap
This is a supporting campaign. Contributions made to this campaign will go towards the main campaign.
This campaign has stopped and can no longer accept donations. 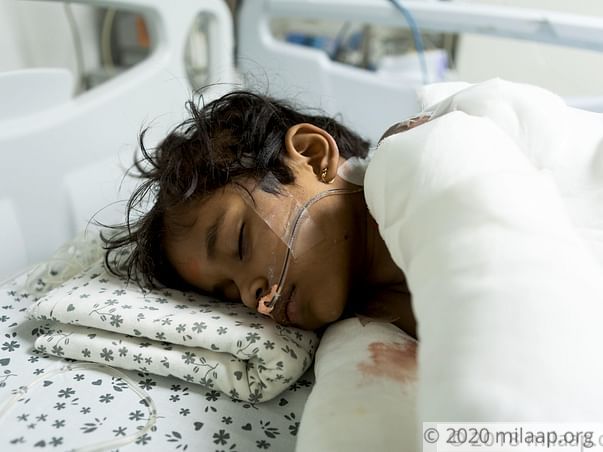 Every year since she could remember, 4-year-old Shreya waited for November to arrive, not because it was her birthday month but because it was the month of the festival of lights. She loved everything about it, from watching her mother, Priyanka, light little diyas (lamps) in their verandah, her grandparents getting her new clothes, to her favourite activity – bursting crackers with her friends. She would always be careful in handling the crackers and follow safety precautions, as advised by her mother. But this year, Diwali ended on a sad note for this poor child and her family.

Shreya’s dress caught fire unexpectedly when she was bursting crackers outside her home, and spread fast to the rest of her body. The little girl screamed for help, calling out to her mother ‘Amma, Amma!’ but unfortunately, her partially deaf mother could not hear her for some time. But help arrived soon after, and she was rushed to the nearest hospital.

With 45% burns all over her body, Shreya is quivering in pain

Shreya’s burns were so severe that she had to be rushed to the ICU on arrival at the hospital, where over the next few days she underwent a total of 4 surgeries. Her arms, entire abdomen and lower body are badly affected and hence covered in bandages to avoid the risk of infection. She has undergone multiple procedures like skin grafting too.  She is going through so much pain that her screams can be heard miles away from the ICU ward that she currently stays in.

“When she is not screaming out in pain, she is begging me to take her away from the hospital. My poor baby thinks that the medicines and injections are making her hurt more. She can only lie down on one side due to the bandages, which is making her very uncomfortable,”-Priyanka, mother

An old photo of Shreya playing with her grandmother

Even her grandparents’ soothing words are not helping Shreya now

Shreya was lucky enough to grow in her grandparents’ care since birth, and loved them more than her own parents. She was an active girl who used to sing songs for them and play with them, more than she did with her peers. Whenever she got a bruise or a wound from falling down while playing, she would run to them first. They always had a solution to her every problem, but now as she lies in the ICU fighting for her life, her grandparents’ soothing words are not enough to calm her. They are there by her side, telling her that she would be fine soon, but Shreya is inconsolable.

Shreya’s ordeal can end with prolonged treatment, but her mother is alone and helpless in this battle

Shreya’s father, Sandeep Reddy, left home for the Gulf one-and-a-half years ago after getting a job as a labourer. He has signed a contract which says that he can only come back to India after completion of 2 years, and hence has not been able to visit his ailing daughter in the hospital. Priyanka is forced to manage everything by herself. With the help of her kind relatives and friends, she was able to pay for her daughter’s treatment till now.  But Shreya needs prolonged ICU care and medication to survive.

Priyanka has spent over Rs 20 lakhs, much beyond her middle-class family means, in such a short period. She has only one prayer: she wants her daughter to survive, even if that means she and her family have to be in debt for the rest of their lives. We can ensure that this mother does not have to endure more suffering than she and her daughter already have till now.

Shreya can be saved from the excruciating pain that she is going through right now if you decide to make a small contribution. Her mother Priyanka is lonely in this battle and losing hope every day. Her father is miles away and helpless. He will not be able to forgive himself is something were to happen to his darling daughter in his absence.

Together, we can save little Shreya 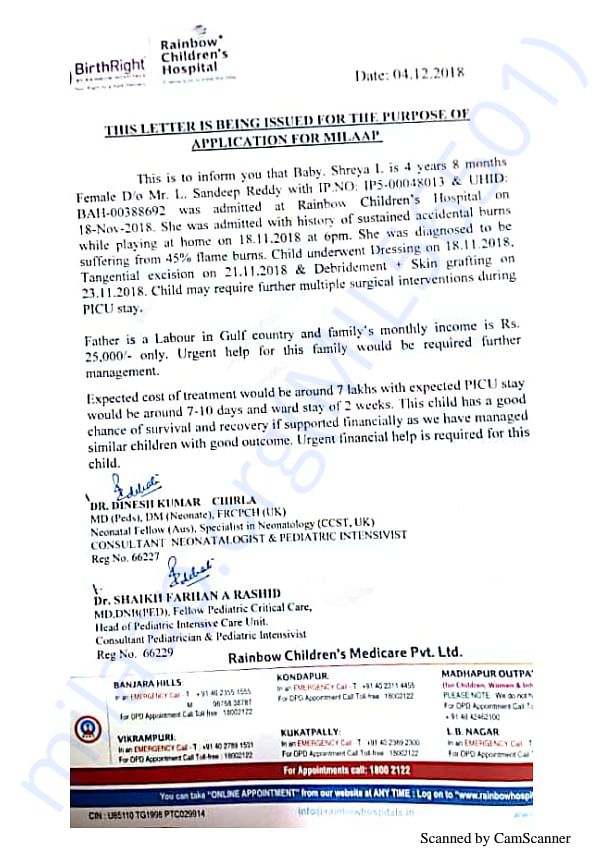 Shreya is doing well and is recovering. Patient  is discharged and is stable. She is responding well to her treatment. We shall keep you posted.

Shreya needs prolonged ward stay and some surgeries. As of now, she is admitted in the hospital and her conditions is improving as well.

Do keep supporting her and do keep sharing the campaign!

You are sending a message to
Rohith pruthvi
Go back 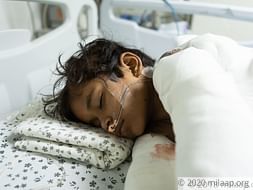