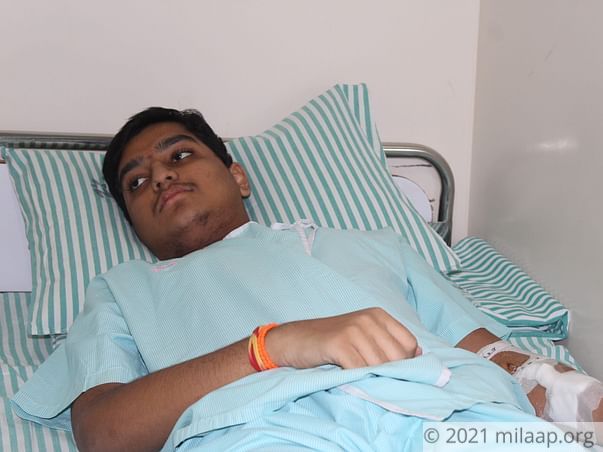 “Until a month ago, Rohan’s day began with cricket. He wouldn’t miss a single practice session or match. He’s inspired by Rohit Sharma, and always strived to play like him. But despite being so healthy and fit, he suddenly became gravely ill. That’s when we realized that it can happen to anyone. Cancer silently crept into our lives, unannounced. Now, Rohan’s day begins in the hospital. He takes his chemistry notes with him, and studies while he gets chemotherapy. Rohan is positive that he will go back to doing what he loves soon, but I worry every day that he won’t make it without treatment.” – Madhusudan, Rohan’s father

Rohan was excited to start class 11. For him, it was his first step towards his dream of becoming an engineer, and even though he knew he had years of hard work ahead of him, he was determined and motivated. Unfortunately, just one week into his new course, he was diagnosed with blood cancer. Rohan’s life is now at a standstill, and without chemotherapy, he won’t make it.

What started as mere shoulder pain, turned out to be a life-threatening disease

For a week, Rohan returned home complaining of a shoulder pain. Madhusudan and Supriya weren’t too worried. The doctor had given him medicines, and the pain subsided. However, within 3 days, his pain was back, worse than before. Madhusudan took him for a blood test, and to his utter shock, Rohan was diagnosed with cancer.


“I told my wife only after a week. I knew the news would be more than she could handle, so I had to make sure I knew everything about the disease and the treatment before letting her know. When I told her, she was devastated, but she knew she had to stay strong for Rohan. We were told that since it was detected in time, he can be saved with chemotherapy. Rohan doesn’t know he has cancer, he thinks is a blood infection. But,we have hope. Our son can be saved.”

Cancer has consumed Rohan’s life, but chemotherapy can save him

Rohan started chemotherapy 10 days ago. Oblivious to the implications of cancer, Rohan remains strong and brave. He needs chemotherapy for the next 6 months to beat cancer, but his helpless parents are struggling to save him. With your support, Rohan can beat cancer for good and fulfil his dream of becoming an engineer.

Madhusdan never shows his worry in front of his family. He knows he must stay strong for them so that they can overcome this monumental hurdle the best way possible. However, behind his calm exterior, is a terrified father who worried about his son’s life every day. He works as a helper in a private company and earns around 8,000 per month. Rohan needs 12 lakhs for chemotherapy, but the amount is above and beyond what Madhusudan and Supriya can afford.


“My friends have been really helpful and supportive through all of this. They all have their own difficulties, but they gave me whatever they could to help me start Rohan’s treatment. They didn’t think twice, but there’s only so much they can do. I’ve borrowed nearly 2 lakhs for all his tests so far. Now, I’m struggling to find a way to continue his treatment.”

Rohan needs chemotherapy to fight blood cancer. As he lays on the hospital bed, all he dreams of is to go back to playing cricket and studying again. Rohan’s bright future is now uncertain because of cancer. His parents are doing all they can to try and continue his treatment, but they’re falling short. Rohan needs your help to get the life-saving treatment and survive cancer.

Your support will save Rohan’s life.