Help 11-Month-Old Sai Fight Brain Disease | Milaap
This is a supporting campaign. Contributions made to this campaign will go towards the main campaign. 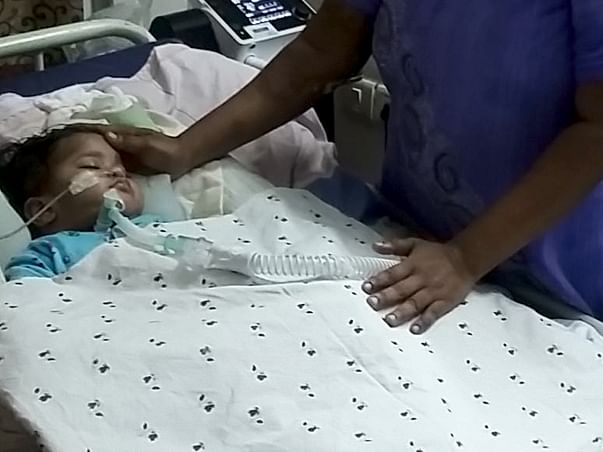 Sai Harieush is a 10 month old baby boy. He was very active until 13th September 2017 and whenever he smiles it attracts everybody.  Instead, now he is on bed knowing anything since it is diagnosed that his nerve was affected and he is on coma stage. In medical terms the diagnosis says that his Central and Peripheral Demyelination/ Cerebral Salt-waisting Syndrome. He need treatment for longer duration probably 10months to years? Also, he needs prolonged ventilator support until he recovers..
Septic Shock @ Chettinadu Hospital, Kelambakkam, Chennai
This started about 2 months ago. We went to Chettinadu Hospital, Kelambakkam, Chenani for his fewer. They have noticed that sudden dip in the pressure and admitted in to pediatric ICU ward for observation. Due to sudden septic shocks noticed, started treatment to control.  Antibiotics also been started for infection in Heart and Lungs.  Whereas, the infection was affected Brain also. MRI have been taken and he went in to partial paralysis which results in to his legs were not active as before. The nerve studies shows that there is no much activeness on his legs. Due to the septic shock, mechanical ventilation was continued.
Tracheostomy operation to keep his throat at safer condition for 10month old child:

After admitted into Chettinadu Hospital, Kelambakkam, Chennai his condition went to worse and was not able to move his hands and legs.  Days and two weeks have been passed from day-1 of 14th September 2017, but there was no improvement.  Treatment cost went to high for ICU Charges, MRI Scans, Nurve studies, medicines and so on. The doctors keeps on prescribing medicines to medicines but again there was no symptoms for recovery.  Because of continuous ventilator thro’ mouth they suggested to carry out Tracheostomy operation to keep his throat at safer condition for 10month old child.  Tracheostomy operation was done and ventilator connected directly thro’ his throat instead of mouth.
We never thought of his condition going to be worse like this:
On 2nd October 2017 sudden seizure was observed and never stopped. Duty doctors was present in the ICU and trying to control his fits.  Because of his condition went to worse, Sai Harieush was transferred and admitted in to Kanchi Kamakoti Child Trust Hospital who is taking care for Children’s treatment alone.. We never thought of his condition going to be worse like this…since he was very active when he was admitted in to hospital at Chettinadu.

One in One Lakh for neuro-degenerative/ demyelinating disorder (ADM):
What Sai Harieush really has is a neuro-degenerative / demyelinating disorder which happened due to involving bilateral middle cerebellar peduncles with suppression of signal on FLAIR. This kind if disease may happen in one in one lakh patient. Unfortunately this has happened to our child Sai Harieush. .  Doctors clarified that he is affected by ADEM (Acute Disseminated Encephalomyelitis is a rare inflammatory demyelinating disease of the central nervous system). Hence he is not responding properly and this may happened due to continuous infection / medication which was not able to tolerable by him.  Since in rare case only this may happen.  Steroid and IVIG treatment have been given to recover back. If this is not worked out the last option is Plasma purification.
He is unable to show any symptoms for recovery from the coma stage.  Yes. It is like a coma stage since the nerve coming from the brain is not acted at all.  Hence, day by day his problem persists as it is… Now-and-then doctors taking care of medication, only for infection and fewer. There was no effect on steroid and IVIG medicines which is costlier medicines than any other pediatric medicines. But there was no much improvement. However, he has shown some improvements ie., slightly raising his hands.
After shifting in to Child Trust Hospital also there was no much improvement except the exorbitant bill payment raised day by day.  With the friends and neighbor help, we have managed to face the hospital bills and payments.  .
Medication is not given any immediate results, prolonged ventilation support and longer treatment needed:
Sai Harieush really has is a neurologically, pupils were unequal, right side 3mm not reactive and left side 2mm sluggish reaction to light.  Hypertonia was noticed in 4 limbs with absent reflex. Steroid and IVIG have started for few days and there was no much improvement on the Steroid.   Since the medication is not given any immediate results, prolonged ventilation support and longer treatment needed to save his life.  Hence, we have asked to take to home instead of spending money in the hospital. Probably prolonged ventilation and monitor at home may cure him.  Hence, he was discharged from hospital on 21/10/2017.  His eyes was closed condition now and there is no much active on his hands and legs movement. Time will take, probably long time to get cure. Until such time, we have to manage with ventilation support along with dedicated nurse to take care him since tracheostomy condition of 10month child needs experienced nurse who can do regular cleaning at tracheostomy hole to avoid any further infection.
He does not know what is happening around him since he is under coma stage:
Sai Harieush was just 10months old when he was admitted in to Chettinadu Hospital at Kelambakkam, Chennai on 14th September 2017 and subsequently he was transferred to Kanchi Koma Koti Child Trust Hospital, Nungambakkam, Chennai on 02nd October 2017, he was in the hospital one and half months and got discharged on 21st October 2017.  Now, he has completed one year (11/11/2017) with the same condition of closed eyes without any movement.  We were very happy since he was born on 11/11/2016, whereas now our Happy moments has gone since even we do not able to celebrate his birthday nor telling birthday wishes. He does not know what is happening around him since he is under coma stage.We are afraid, we won’t be able to save him:
After discharged from the hospital almost nearly a month now, Sai Hariesh is on bed and no much movements other than raising his hands. Physiotherapy and medication continued as per the discharge summery and doctor’s advice under experienced nurse.  The expense towards rental of ventilator, nurse salary and surgical items takes huge cost which is not affordable by us.  With this condition Sai Hariesh needs 10months to 1 or 2 years treatment, which we afraid that we won’t be able to save him with our small earnings. We do not know how long this journey going to be like this.  Whoever the friends and relatives helped us to face the hospital expenses at Chettinadu Hospital and Child Trust Hospital but expense now facing not manageable by us?   Peoples are coming and expressing their feelings and emotions but there is noboday ready to help us financially further more.  Whoever helped us also to take care of their personal needs, hence we do not able to any more help from them.  Hence, we need your help to meet out medical expense towards ventilator, nurse, medicines and so on.
Each and every month cost us nearly 2lacs (Ventilator cost 45kto46k, Nurse Expenses-(for the round the clock), Surgical Items (suction tube, 30k, medicines-15to20k, Hospital consultation and tests-15to20k, other costs-10to25k).  We may require fund to meet another at least 10months like this.  We have spent all our money to settle the medical bills and treatment costs at Chettinadu Hospital and Child Trust hospital.  Now we do not have much cash to maintain his health as it is.  Hence, we are much afraid, we won’t be able to save him because running out of cash.

Just 1 year is too young to go through such kind of difficult situation. Kindly Help us to save him and come out of this present condition to recover Sai Harieush back to normal please.  If you are unable to help financially but you can share and forward this message will be appreciated as well. It will take a minute and really we do appreciate your on-time help please.

UPI: rzpy.givetomlpharieush002@hdfcbank (Copy to clipboard)
Or
Click here to read the instructions before you make a bank transfer. 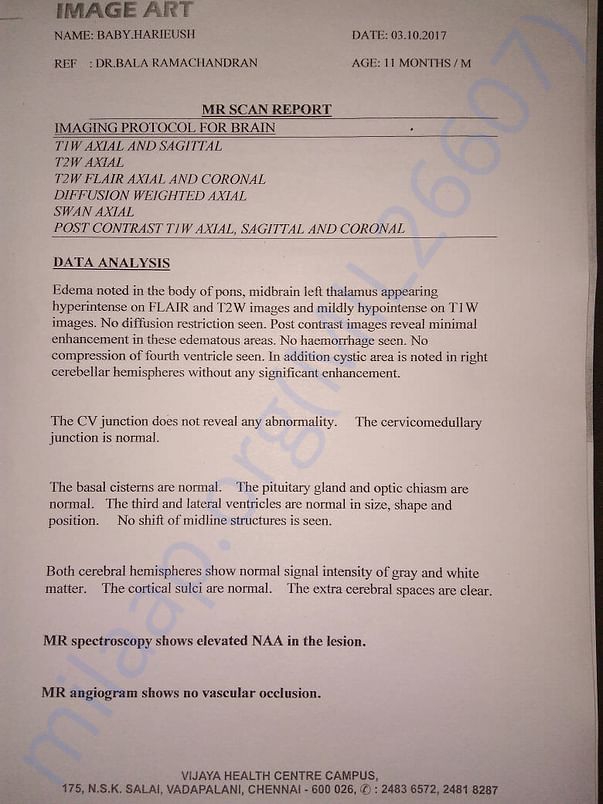 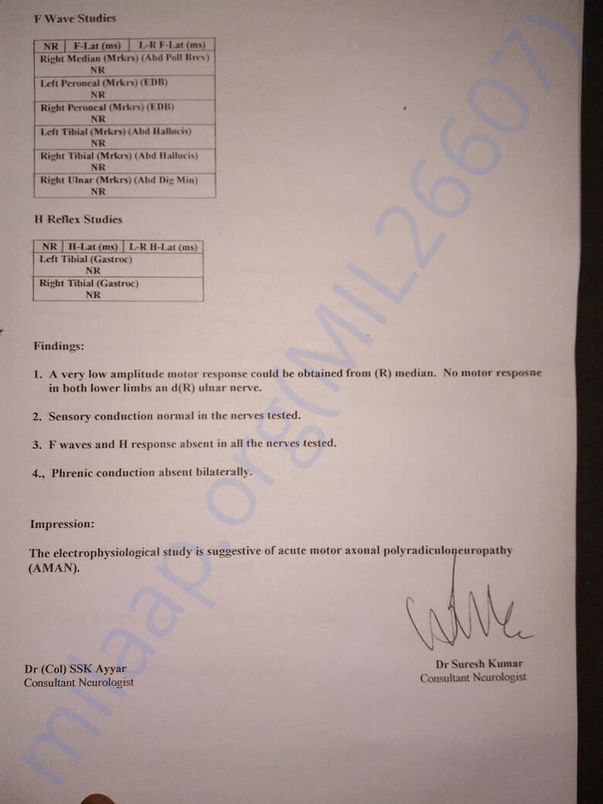 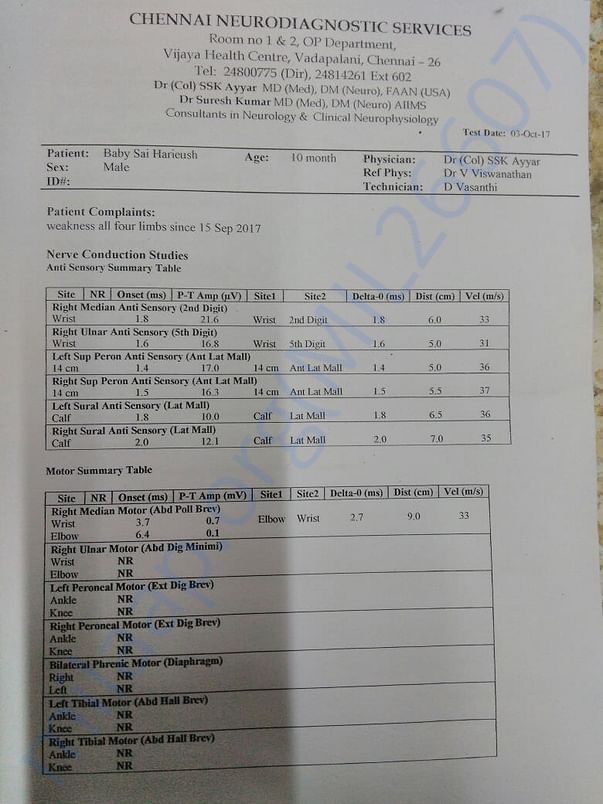 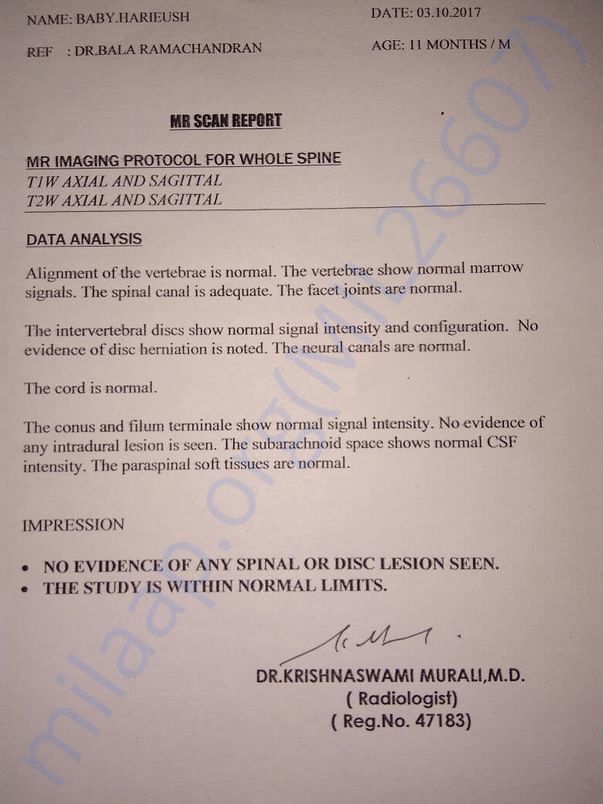 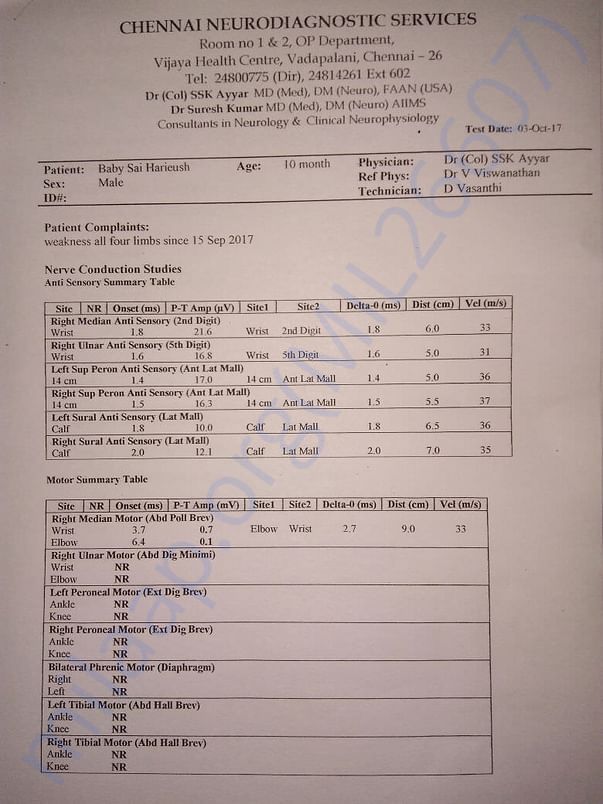 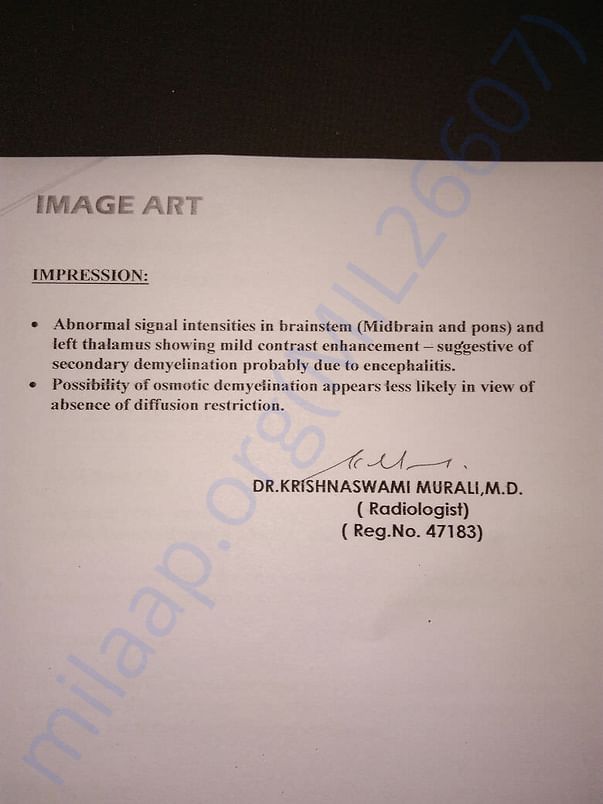 UPI: rzpy.givetomlpharieush002@hdfcbank (Copy to clipboard)
Or
Click here to read the instructions before you make a bank transfer.

Ask for an update
Donated to this campaign via Paytm or bank transfer? Click here if you have not received an email confirmation from Milaap.
Dear donors!

After continuous treatment, Sai Harieush showing the symptoms of recovery from demyelination issues.  He started crying in hunger for his feed.  We are very happy of this moment. After 2 and half years , we are listening his voice.

Thanks for all for the continuous support.

Thank you for the wonderful support. Child Trust Hospital for Sai Harieush to remove the Tracheotomy operation done earlier in the throat. During the investigation in the operation theater, the Doctors found that one cyst in the excision of the supernatural portion. Hence, cyst was operated and Sai Hariesh was discharged. Hence, the operation postponed to one month after which falls on Monday (23rd July 2018).

Thank you for the wonderful support. Please do pray for his health and speedy recovery. Will keep you posted.

Thank you for the wonderful support. Sai Hariesh has been undergoing physiotherapy and there is an improvement in his physical movement. His support on the ventilator also has been reduced and he has been removed from the ventilator.

Considering the present condition, Child Trust Hospital ENT recommended removing the tracheotomy which is scheduled on 21/05/2018  after endoscopy.  He may require staying in the hospital 4 or 5 days. Request your co-cordial support to cross this hurdle for a speedy recovery.

Thank you for the wonderful support. Please do pray for his health and speedy recovery. Will keep you posted.

You are sending a message to
Rishabh Sardana
Go back 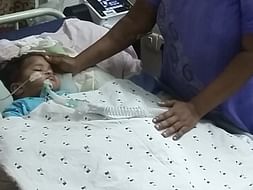