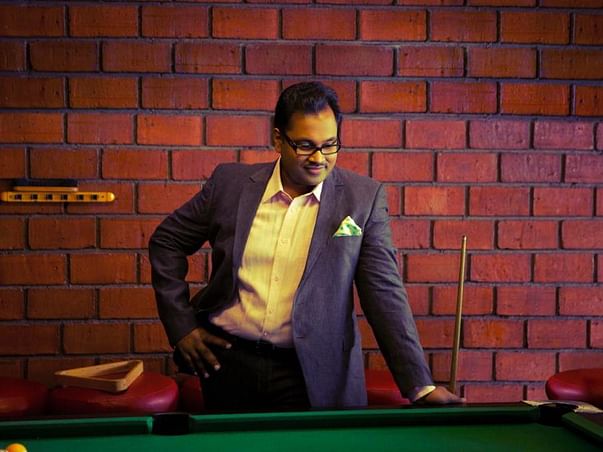 As you might already know, our dear friend Abhay Jaiswal (1976-2021) passed away in the prime of life, due to COVID related complications on 7th May, 2021. This fundraiser is an effort by Abhay’s closest friends to help contribute to the future education of his kids.

This was a man that lived a Technicolor, 70mm reel life in reality. A small town boy, with immense pride in his moustache and his humble roots, rising up from his circumstances to enter the premier institute of the country - IIT, Delhi and then MBA from London Business School and eventually returning to his homeland to contribute to India’s development. And all this while earning the love, friendship and admiration of so many.

For us who knew him, his "larger than life" persona was a constant pursuit for happy endings to every story. His stories were as much about the minute/meticulous details as they were about bigger, loftier causes. His enthusiasm for the “Grand” in life was infectious - he aspired for the glorious and the heroic in life not only for himself but for all those around him. People were  lifted above the mundane often after just a brief meeting with him. He would rejoice as much, if not more, at the successes of people around them as he would for his own. His father, Late Mr. Arun Kumar Jaiswal, had instilled in him a selfless and caring nature that was evident to all around him. His doting mother, Mrs. Meera Jaiswal, showered him with unconditional love. Mukta Jaiswal, his sister, had a friend, a guide and a mentor in him.


As a  schoolboy in Ranchi he was an avid debater and an avid thinker. He believed that we can all “will'' our dreams into reality. Getting into IIT Delhi was the first such dream and then there were many others. He saw the movie Dilwale Dulhaniya le Jaaenge and knew he was going to be Shahrukh Khan’s Raj - and he did become one. He started a DDLJ style love story while in University and met the love of his life, Karishma. Against all odds, and just like Shahrukh, he won over her family and married her with the full blessings of her father.

While living in London as a typical desi software engineer from TCS, he decided it was time for the “Hero” to do something for the greater good and joined Pratham - a charity focused on providing education to the underprivileged children in India and there was a time when Abhay was responsible for helping raise 1.5 million pounds for the charity. While at Pratham, he realized that he would be able to do much more if he got a business education so he again “willed” himself into the London Business School. He remained active in the London Business School community thereafter and always spoke fondly of the  experiences he gathered there and the friends he made there. He traveled to London for the tenth anniversary of graduation and described it as one of the most magnificent experiences of his life.

His two kids were born during this period. Siddharth in India and later Vasundhara in London. One of us remembers talking to Abhay shortly after Siddharth was born - “I feel as if I will have less regrets if I die now - because a part of me lives on; as if a big part of my mission in this world is now fulfilled.” He remained devoted to the education and development of his kids nurturing them to achieve their fullest potential.
What he learned in LBS made him realize that entrepreneurship was the best path to make a real impact on the world - especially in his “matrabhoomi” (motherland) that had always beckoned him through the years living in London. So he left a promising technical consulting career to change tack and start a food business in India. A business that would give him the experience to touch all aspects of entrepreneurship and prepare him for even bigger things he had planned in his future. He was known as the nariyal paani (coconut water) guy for being the brains behind the launch of Cocofly. His passion again shone through when he himself starred in the funny online commercials of the product.

After running the food business for a few years and having learned everything he needed to learn of running a business in India, it was time for the next grander chapter. It was time to bring employment to his hometown that only a large factory can bring. Despite having little experience in running a large factory, he was again able to "will" his investors into investing millions of dollars in his big dream to transform dairy, packaging, agriculture and a whole slew of verticals!

Had he been alive, his next chapter in life would have read something like this:

He went on to create the largest producer and distributor of agricultural products in India and transformed the lives of millions of people in the country. He brought them stable and sustainable employment. Many say he was the harbinger of prosperity in the rural areas of India. While achieving all this, he somehow managed to inspire his son and daughter to university. Thereafter he and his wife grew old together and lived happily ever after - just like a 70 mm Bollywood production he so loved.

Unfortunately, Covid snatched him too swiftly and all we have is his depleted savings (through two years of unrelenting work on his new venture) and unfulfilled dreams of a brighter future. He will never be able to transform India nor will he see his kids grow up the way he imagined. However,  we can help in making sure that his survivors, his son and daughter, may one day get the stability and education to perhaps fulfill their father's dreams. Everyone who has met these two incredible kids can see Abhay in them. It’s no surprise to see his kids so interested in modern physics. Abhay was always interested in aspects of physics that transcend our everyday experiences. He loved to talk of the many world interpretations of Quantum Physics and Multiverses, of General Relativity and the illusion of past, present and future, of String Theory and the Holographic Universe. He loved watching movies like Interstellar and Tenet, especially with his son Siddharth.

Please join us in partially realizing the dreams of this incredible dreamer, father and husband and hopefully bring a smile on his face, in whatever “space-time” dimension he is in now.