Pregnant Mother Struggles To Save 2-Year-Old From Blood Disorder | Milaap
This is a supporting campaign. Contributions made to this campaign will go towards the main campaign.
This campaign has stopped and can no longer accept donations. 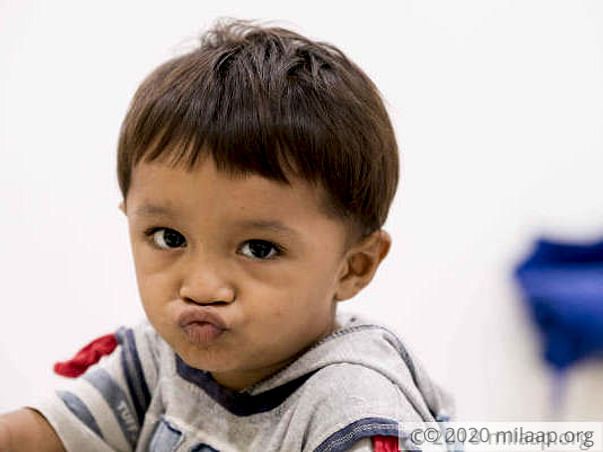 “When I found out I was pregnant again recently, I was filled with worry instead of happiness. We have never experienced joy ever since Rajveer was diagnosed with Thalassemia Major. I was worried whether my unborn child will also have Thalassemia, but with God’s grace the genetic testing done in early pregnancy was negative for Thalassemia in my unborn baby and I can continue my pregnancy. I don’t even feel like eating anything because I know my husband cannot afford his treatment.”-Payal, mother of 2-year-old Rajveer.

When Baby Rajveer was born, he did not have any known complications. His parents, Jaiveer and Payal, believed that he would grow up to be healthy just like their elder child, 4-year-old Prachi. But at 7 months, they noticed that Rajveer’s heart started beating rapidly and he could not breathe normally all of a sudden.


“Our child was growing up to be smart; he had just started sitting up on his own when bad things started happening to him. In addition to severe breathing difficulty, he also started turning pale and losing consciousness. We had not seen anything like this before.”-Jaiveer, father.

Results showed that this baby had a rare blood disorder, requiring transfusions every 4 weeks

Baby Rajveer started falling sick more often after he turned 7-months-old. He was taken to different hospitals in their small town, Yavatmal, near Nagpur, Maharashtra, but his conditions kept on coming back month after month. He was then taken to Mumbai, where a comprehensive blood test showed that Rajveer, has Thalassemia Major in which patient needs blood transfusions every 3-4 weeks as his/her own body cannot make blood normally. Without these blood transfusions he will not be able to grow well. He cries a lot and is very scared of needles but he does not get a break from them due to the need for frequent
blood transfusions. Even with frequent transfusions he will have multiple health problems due to excess iron in his body due to these frequent blood transfusions.

“My baby boy has only seen a life of needles and pain. Now he has become so accustomed to the hospital environment that he thinks it’s a normal activity – like eating or drinking. ”-Payal

“We know exactly when he gets sick – he becomes an entirely different child then. He becomes so weak because of excruciating pain in his limbs. He cannot even sleep well at night – he tosses and turns and wakes up shrieking in pain. My poor baby cannot even convey what is wrong with him, but we can understand what he is going through from his expressions.”-Jaiveer.

This pregnant mother has nightmares of losing her child, and cannot eat or take care of herself during this sensitive period

Jaiveer works in a private company in Yavatmal, but he has not been able to go regularly to work because of Rajveer’s illness. He was able to manage his treatment expenses till now - but ever since the doctor said that only an expensive transplant can cure him, he has been scrambling for funds. Payal, who is 4 months pregnant now, hardly eats any food because she is worried that they will not be able to arrange the money required for treatment on time.

“I know that there is a life growing inside me, but my son’s innocent face haunts me. He cries when I leave him alone for a minute at the hospital.”-Payal.

After After a lot of struggle, Jaiveer and Payal finally found hope in a Mumbai hospital which assured them that a bone marrow transplant can save him. Despite this difficult diagnosis of Thalassemia major, Rajveer has hope of cure from Thalassemia major because his sister, Prachi, is also a complete sibling match (by HLA testing). But Jaiveer has been battling many financial problems in the last two years as he was not able to go to work regularly because of his son’s illness. Now, amidst all the sadness, Payal is expecting another baby, and her troubles have only doubled. While Jaiveer scrambles for money,  Payal is struggling to even eat a morsel because her son hardly eats due to his condition.

“My son hardly gets up from bed now. He is hardly hungry and always tired. So I stay with him and don’t feel like eating as well. When your baby is going through so much pain on a daily basis, life stops for you. If something happens to Rajveer, I don’t know what I will do. My body is weak, but my mind is weaker because I am stressed about the fact that we have no money to cure him from this major illness.”-Payal. 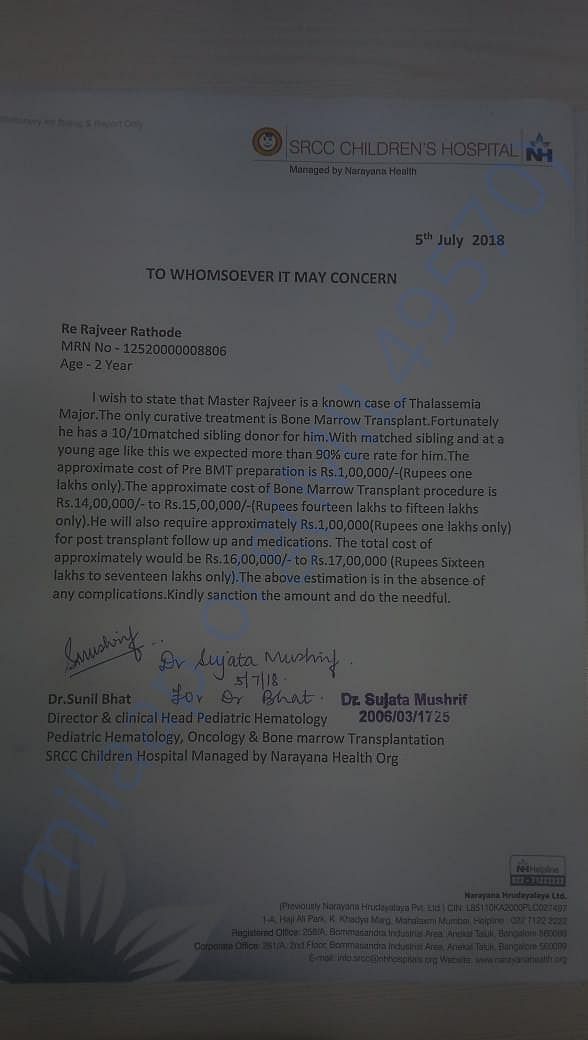 The patient has been discharged successfully. He is doing ok and is responding to the treatment.

Thank you for the love and support. Here is a quick update on Rajveer's health.

Currently, he is at the hospital in the ICU. He is undergoing chemotherapy, there had been side effects like hairfall, weakness, etc. Doctors are of the opinion that Rajveer should stay in ICU for another three weeks so that doctors can monitor his health closely.

Please pray for his health and speedy recovery. Will keep you posted as his health progresses.
Regards,
Jaiveer

Donated to this campaign via Paytm? Click here if you can’t find your donation listed below.
MM
Milaap Manya's Funds donated Rs.100,000

Donated to this campaign via Paytm? Click here if you can’t find your donation listed below.
MM
Milaap Manya's Funds donated Rs.100,000 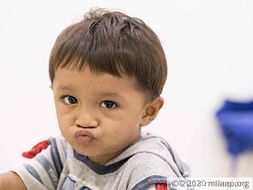