Help Harshini fight a severe liver disease | Milaap
This is a supporting campaign. Contributions made to this campaign will go towards the main campaign.
Milaap will not charge any fee on your donation to this campaign. 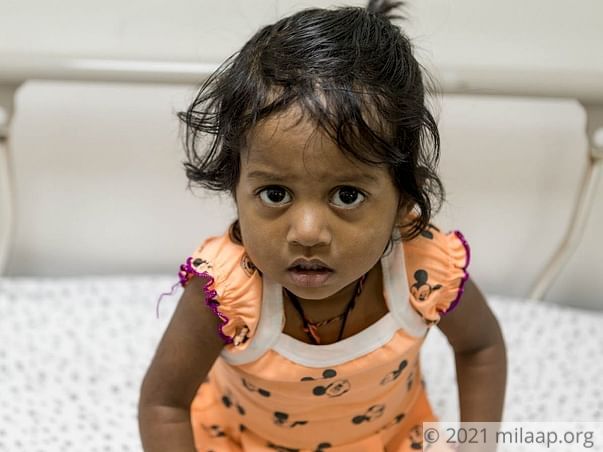 “It’s the hardest thing, for a parent to see your child unable to eat anything. No matter how little she eats, she throws it up.”

December last year, almost 2-year-old Harshini got a fever that wouldn’t go away. She was also unable to eat anything and her stomach had started swelling up and tightening. Alarmed at this, her parents, Thirupathi and Mamatha took her to the hospital. Upon running a few tests, the doctors referred her case to Rainbow hospital, suspecting liver damage. Here, after a biopsy, it was diagnosed that Harshini’s liver had failed and that she would need a transplant to survive.
What started as a simple fever, turned into their worst nightmare
Since October, Harshini’s stomach would occasionally tighten up, not letting her eat. But their usual doctor attributed it to vitamin deficiency and prescribed her medication for the same. It always got under control, even though it never fully got cured. So in December when her condition worsened, the parents didn’t want to take a chance and sought serious medical attention. But even in the worst of their dreams, they hadn’t anticipated how serious their little girl was.
Harshini's life is nothing like that of other children her age

“We see other children her age play with each other and live their life without a care in the world. Then we see Harshu, she can barely walk on her own with all that pain in her stomach.”

Ever since she fell sick, she has been unable to keep her food down. Every time she eats something, she vomits. Moreover, she suffers from acute pain in her stomach and has started getting pale patches on her skin owing to the disease. Unlike other kids her age, she can’t run around and play, or eat her favourite food. For a little girl, this suffering is too much to bear. Because of her condition, she’s also rapidly losing weight and her strength. Seeing her go through all this pain and discomfort, makes her parents lose their sleep at night.

Harshini is their first child, born soon after their marriage. They were overjoyed at the idea of starting a family. All their dreams for a happy life with kids were shattered with Harshini’s diagnosis. Just before Harshini got sick, Mamatha got pregnant again. Now they’re scared about the health of their unborn child and worried about how they’ll be able to manage a newborn and a sick child at the same time.
Thirupathi feels guilty at not being able to admit his sick child to the hospital

“I feel so helpless and guilty that I can’t hospitalise my child. I don’t have the money. My daughter deserves better than this.”

All they want is for their little girl to recover soon so that their happy dream can resume and go on uninterrupted. But sadly, that’s not their reality. For Harshini to survive, she needs a new liver. Thirupathi got tested, to find out if he can be her donor and turns out he can. Now all that’s stopping Harshini from recovery is the lack of money. In the meantime, he can’t even admit Harshni at the hospital, because he can’t afford to pay the hospital bills.
How you can help
Thirupathi holds a sales job, for a minimal salary. Within this limited money, he has to manage the household expenses, take care of his pregnant wife and most importantly, care for his ailing child. His financial crunch doesn’t leave him with enough money to afford this expensive treatment for his daughter.

So far, he has been paying the medical bills from his savings that have now run out. If Harshini doesn’t get a transplant soon, she will succumb to her illness and lose her life. In order to save his daughter’s life, Thirupathi desperately needs our help. Your contribution can make all the difference in their lives, by giving Harshini a fair second chance at life. 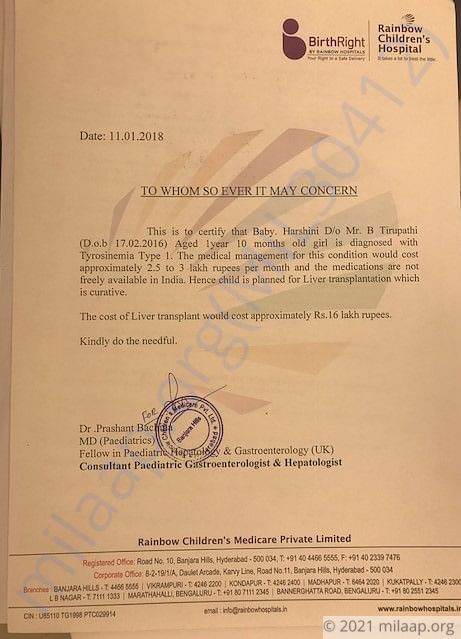 Thank you for the wonderful support that you have shown towards Harshini. She is doing better now compared to earlier and has successfully undergone the transplant and recovering well.

There are some excess funds available which could not be utilised towards her treatment and we will be initiating a transfer towards, From the time he was 18 months old Mohan struggles with Liver disease. He has undergone the transplant procedure but has a few pending expenses that have to clear due to his extended ICU stay until his health stabilised.

Thank you all once again. Please do pray for her health and speedy recovery.

Regards,
Praneetha
Harshini is doing well and has been discharged from the hospital. The father is also doing well.
Dear Supporters,
Thank you all for your support.

Harshini underwent a successful transplant on 6th June, her father was the donor and both of them are doing well now.

Harshini is still under observation but recovering. Doctors have indicated that she will be discharged soon if there are no symptoms of rejection or any other complication.

This couldn't have been possible without the support of you all, thank you so much for the love and support which you have shown towards her.

You are sending a message to
Battu Durgesh
Go back 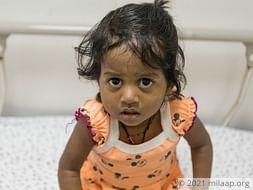