This baby boy accidentally swallowed acid and is now hospitalized | Milaap
This campaign has stopped and can no longer accept donations.

This baby boy accidentally swallowed acid and is now hospitalized 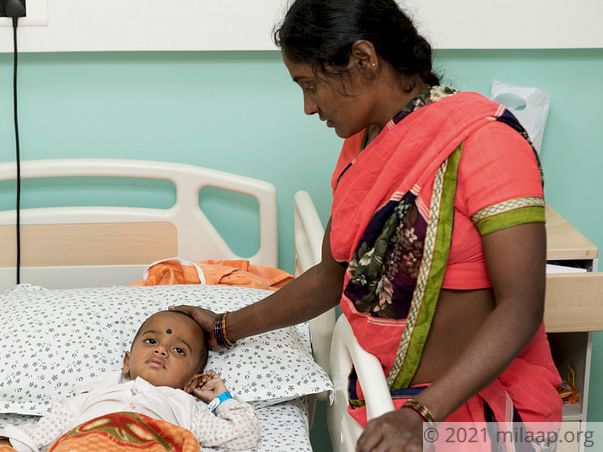 “He was playing just outside the house when he swallowed it and immediately started throwing up. I don’t know who would put it there.”

Rajesh is a 2-year-old little boy, who was very active until a few days ago. Just before last week, while he was playing outside his house, he found lumps of oxalic acid crystals lying on the floor, and before his elders could reach to stop him, he swallowed some of it. His uncle Upender saw him suddenly gasp for breath and clutch his throat in pain. And immediately rushed to his side to see what it was, and by then Rajesh had started screaming and throwing up.

Rajesh's insides are burnt and he can't eat anything

Upender got really scared and he took his nephew to the local hospital. Upon hearing what had happened, the doctors referred them to Rainbow hospital in Hyderabad. Here the doctors ran various tests on Rajesh, including an endoscopy, which showed them how badly his insides were burnt due to the acid. His food pipe and stomach lining had corroded and due to that, his was unable to eat anything. Whatever he would be fed, he would throw it up right away and keep crying out in pain. Following the tests, they did a small surgical procedure where they inserted tubes into his stomach, to feed him directly, in order to make sure he gets nutrition.


“He is in a lot of pain, but he doesn’t cry out anymore. He just silently weeps and sobs out of pain because he can’t tell us how badly it hurts. It hurts to see an active child become so dull.”

Rajesh was a very active kid who would run around and play all the time. But this accident has weakened him and causes him more pain than he can tolerate. In the hospital, he doesn’t talk, doesn’t get up and play, all he does is to cry softly all the time because of the pain. His parents have lost their sleep over their child’s condition.

After losing their first child, Rajesh is the only ray of hope in their lives

“His life means everything to my brother and sister-in-law. They have already lost a child, and can’t bear to lose Rajesh too. They never thought he would fall sick this way and that his life would be at so much risk.”

Rajesh had an elder brother Harish, who was born with developmental disorders. He was physically handicapped and bedridden since birth and had stunted physical growth. 5 months ago, his disorder took his life and the parents, Venkanna and Bubamma are still recovering from the shock of his sudden death. They were grateful that at least their second child is healthy and now they’re shattered at his condition. They just can’t afford to lose their second child too.

His financial condition is not letting him afford Rajesh's treatment

Venkanna is trying his best to save his son from suffering, but he can’t do much without money and his financial status will not allow him to pay for Rajesh’s treatment. So far, they have spent over Rs 80,000 over his treatment by mortgaging gold and borrowing money from relatives and friends, but now they have run out of all the money and can’t afford the prolonged treatment Rajesh needs, in order to recover.

Venkanna works and daily wage labourer and his wife works as a domestic help in their village in Khammam district. Between the both of them, they earn only just enough to make ends meet. Upender helps them out in whichever way he can, with running the household finances, but all their money put together is not enough for Rajesh’s treatment. In order to save their little boy’s life, they need your help.

Your contribution can bring Rajesh out of his pain and misery. 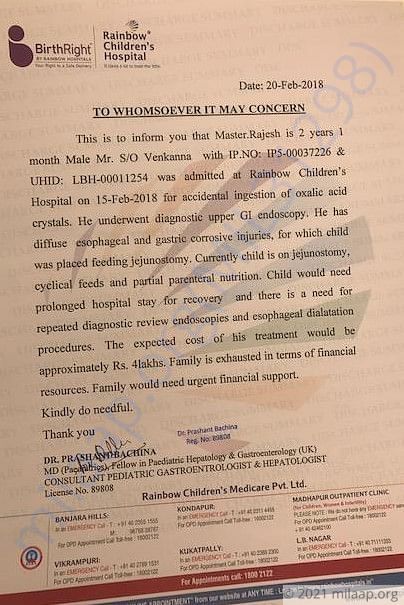 Rajesh has been discharged from the hospital and is doing good. We have transferred the amount raised to his father's account for the treatment. The campaign had some pending amount and it has been transferred to 2 other patients. Here are the campaign links: Anasuddin - https://milaap.org/fundraisers/support-anasuddin
and Twins of Chetana - https://milaap.org/fundraisers/support-chetanas-twins.

Thank you for the wonderful support that you have shown towards my nephew Rajesh. He is doing better now compared to earlier and based on his health and recovery the doctors have discharged him on Sunday (25th March). He has been advised regular follow-ups to monitor his health.

Thank you all once again for the support. Your support and blessings have helped him to recover faster. Please do pray for his speedy recovery.

Thank you for the wonderful support that you have shown towards Rajesh. He is doing better now compared to earlier. He has successfully completed two procedures and has no infections. The doctors suggest that he is recovering faster than expected. If he recovers at this pace then he will be discharged soon.

Thank you all once again for the support. Your support and blessings have helped him to recover faster.

Scan & donate with any app
check_circle_outline Download payment receipt
Report fundraiser
Know someone in need of funds for a medical emergency? Refer to us
Rs.379,495 raised

175 Supporters expand_more
This campaign has stopped and can no longer accept donations.
$150 Million +
Raised on Milaap
Are you in need of financial support for medical or personal emergencies, or a social cause?
Start a fundraiser
Or
Know someone in need of funds for a medical emergency? Refer to us
Campaign organizer contact_mail
O
Obaidullah
Beneficiary: Rajesh V info_outline

Donated to this campaign via Bank transfer/QR Code? Click here if you can’t find your donation listed below.
M
MRSUMEETGOYAL donated Rs.2,500
A
Anonymous donated $50

Hope this little boy gets all the support he can whether it be financial or emotional. God bless him and may his recovery be soon.

GET WELL SOON... GOD IS GREAT, HAVE FAITH.

Donated to this campaign via Bank transfer/QR Code? Click here if you can’t find your donation listed below.
M
MRSUMEETGOYAL donated Rs.2,500
A
Anonymous donated $50

Hope this little boy gets all the support he can whether it be financial or emotional. God bless him and may his recovery be soon.

GET WELL SOON... GOD IS GREAT, HAVE FAITH. 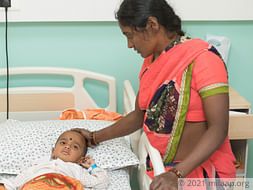 This baby boy accidentally swallowed acid and is now hospitalized