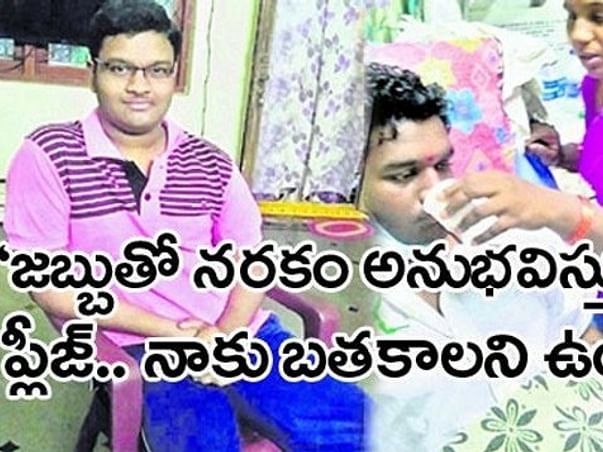 Rajesh currently is fighting aplastic anaemia and urgently needs to undergo treatment for the same. He's admitted in NIMS.
Please come forward and help the family at this time of crisis. Thank you everyone!

The parents were drowning at the child being in school. In the absence of economic affairs, he was admitted to the corporate college. In the first year of his career he achieved 461/470 marks, becoming the college taker. At the same time, fate has disrupted. The student struggled with rare apalistic anemia. The parents of the farm, the gold sell, the house pledged Rs. Even though he spent over 12 lakhs, he could not be cured. He is currently struggling with death at a hospital in Hyderabad. Rs. Doctors say they will cost 25 lakhs, so they do not have enough money to save their baby. Looking for financial aid.

Natamalli Rangayya and Anjamma's daughter of Karanchendu, a resident of Purchur Mandala, have a daughter and daughter. Rangiah who is playing a family with a stroke and a son, Rajesh Babu has been in education and has not been in financial corporation but has joined the corporate college. Rajesh Babu has scored 461 marks in the first year. Three months after joining in the second year he was ill.

Rs. 8 lakhs cost
Rajesh Babu, who is facing many health problems, was initially picked up by a private hospital in Chirala. Later he visited several private hospitals in Guntur. Despite many tests, the doctors could not diagnose the disease. Eventually the NIMS was taken to Hyderabad, where the original thing was found. He was diagnosed with apalcy anemia, the smallest in the world. Parents have already been paid Rs. Spent over 8 lakhs and could not afford to be economically unemployed.

Sale of farm, house hostage
Parents have made every effort to survive the child. The Arecaara farm was sold. Puccukulam in village is Rs. 6 lakhs. He also made some more debt. Total Rs. 12 lakhs spent. In this case, the exam is only Rs. 8 lakhs spent. Even though Rajesh Babu did not heal.

Deteriorating health on a daily basis
Rajesh Babu, who is currently undergoing treatment at NIMS Hospital in Hyderabad, The blood cells die once every 12 to 13 days, and it is born again. But Rajesh does not have any new ones again. They are evaporating in the bones. He is facing many kinds of ill health problems. Besides the bumps on the chest, the skin lungs are changing. He can not get out of bed and get out of bed. The parents said that doctors said they had been dead before the same situation continued.

Rs. 25 lakhs or not to be treated ..
NIMS doctors say the disease will be cured if the organs in the blood is reached. 25 lakhs will be spent. The CMC in Tamil Nadu recommended the use of stem cells in the state. Donar has also been found from the Thatriya Foundation. But Rs. 25 lakhs are seeking or seeking financial help. At present, Rajesh Babu is blood transfused once in 20 days. Those who are grateful to the Kama khisheer maidi in the chairs that are supported by the donors are asking the donors to come forward and give aid to their child.

There batakalani
me is batakalani. But the intensity of the disease is growing up day by day. Experiencing hellfire. Can not even get out of bed. Donors respond and help them better if they help. Find a job and help some of you.
- Rajesh Babu

UPI: rzpy.givetomlprajeshba004@hdfcbank (Copy to clipboard)
Or
Click here to read the instructions before you make a bank transfer. 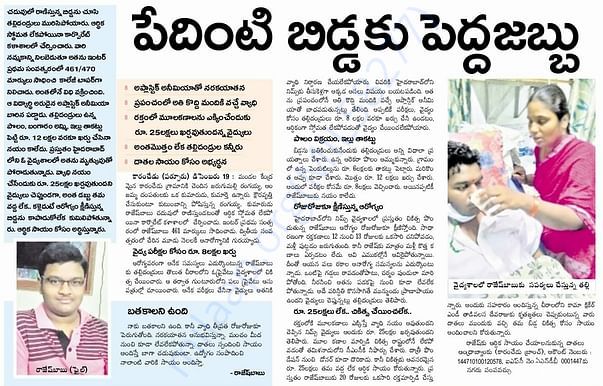 UPI: rzpy.givetomlprajeshba004@hdfcbank (Copy to clipboard)
Or
Click here to read the instructions before you make a bank transfer.

SP
You are sending a message to
Suresh P
Go back 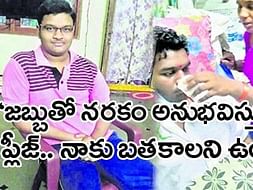