An Urgent Bone Marrow Transplant Is The Only Cure For This 4-Year-Old | Milaap
This is a supporting campaign. Contributions made to this campaign will go towards the main campaign.
This campaign has stopped and can no longer accept donations.
Milaap will not charge any fee on your donation to this campaign. 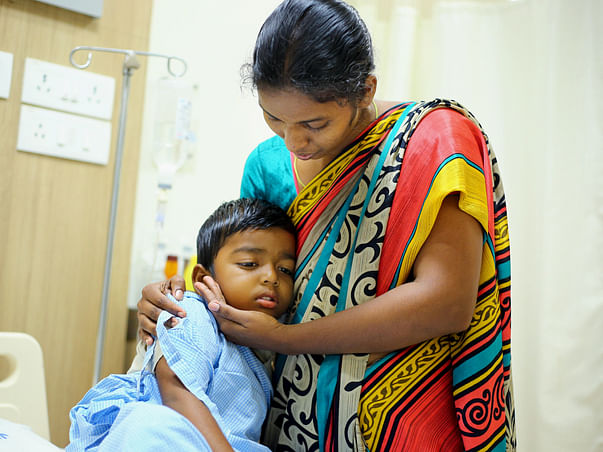 ‘I can’t sleep Amma! My hands and legs are hurting!’ cries Raja Kumari’s 4-year-old who cannot sleep at night, begging his mother to do something to ease him from the unbearable pain in his legs. This little one is suffering from blood cancer and helpless mother stays up all night holding him in her arms and massage his hands and legs until he falls asleep.

Raja Kumari's younger son used to spend most of his time happily playing with his brother Avinash (11) in his tiny home in Vijayawada, Andhra Pradesh. He was a happy and healthy child and never had any illness. Raja Kumari lovingly used to call her son Akhil at home and was planning to name him the same after his first birthday. But just a few days after his birthday, things started to go downhill and he started developing recurrent fever. Raja Kumari thought of it as some common flu and hoped her son would get after doctor’s consultation. Much to her despair, he didn’t get any better and his fever kept on getting worse.

After a series of tests, Raja Kumari's younger son was diagnosed with Acute Lymphoblastic Leukemia, a severe form of blood cancer where leukemic cells that come from immature blood cells doesn’t work like normal cells and crowds out healthy red blood cells. He underwent treatment for 1 year and was slowly recovering from the deadly disease.

“The first few weeks of his diagnosis were the hardest. He has not been the happy and charming self and it was hard to watch him go through the painful process. He was just 1 year old and it was too much for him to go through.” - Raja Kumari, mother

“We thought he was free of cancer, but he wasn’t and now his condition is worsening even more.”

After undergoing year-long chemotherapy, Raja Kumari and Krishnamraju thought he was cancer-free finally. They hoped that their younger son could finally start going to school. Things just started getting normal at their home and the parents were beginning to see light at the end of the darkness when one month back, Raja Kumari’s son started having fever again. She took him to the hospital and was completely devastated when the doctors confirmed that his cancer has relapsed. And now its worsening even more. Looking at her little son suffering so much, Raja Kumari says, ‘The fever just doesn’t go away and it's making him weaker with each passing day. I try everything I can to comfort him but nothing works.’

Now a bone marrow transplant is the only option for him to beat the deadly cancer. His elder brother Avinash is suitable match for the transplant but poor parents have no means to afford the transplant.

Krishnamraju works in a welding shop earning a meagre income of Rs 400 per day. Raja Kumari is a homemaker and spends her time looking after her children and other family needs. When their son was diagnosed with blood cancer, Krishnamraju borrowed Rs 20,000 from everyone that he knows of, which was only enough to meet the medicals tests expenses. He could start his son’s treatment for the first time with government’s help but now he’s struggling hard to afford a transplant that costs 25 lakhs with the little income he earns.

Raja Kumari's 4-year-old has gone through a lot for a kid his age. He could beat cancer for the first time but now lack of funds stands in his way to beat cancer again. He wishes to go to school and have a normal life like every other kid. A bone marrow transplant is the only that can help him beat cancer and he can only do it with your help. 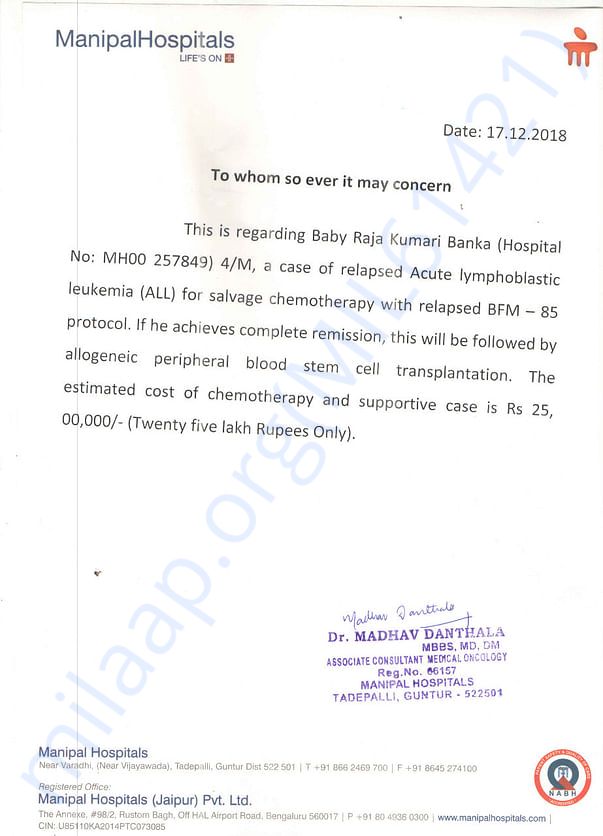 Baby Raja Kumari is doing well. He progressed while on treatment and we have tried three different lines of treatment. Nothing much to offer him from medical side. Hence after explaining prognosis we have stopped his chemotherapy.

Scan & donate with any app
check_circle_outline Download payment receipt
Report fundraiser
Know someone in need of funds for a medical emergency? Refer to us
Rs.232,237 raised

You are sending a message to
Hg
Go back 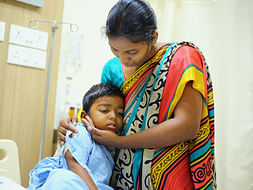