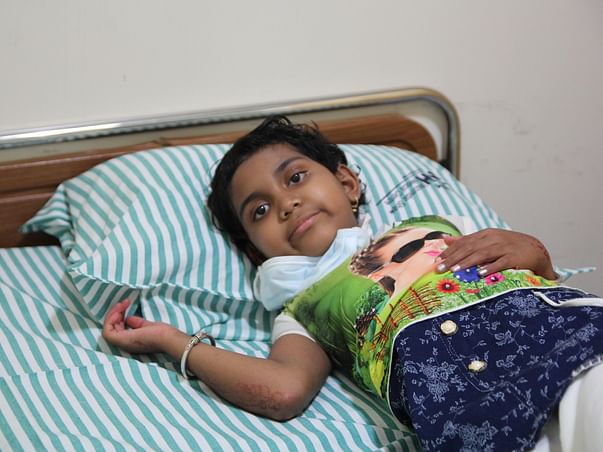 Share
Hemashree is a fighter. She remains cheerful and positive despite the agonizing pain of blood cancer. She was diagnosed three years ago and underwent a bone marrow transplant on December 3, 2016 due to the severity of her condition. Unfortunately, Hemashree (6) developed a serious infection soon after. If this deadly infection is not treated, Hemashree might not make it. Her mother, Asha, is singlehandedly trying to save her. Hemashree needs continuous treatment for the next 6 months to survive.

When Hemashree was born, Asha’s husband told her that she had to leave Hemashree and her older daughter, Gaganashree, in an orphanage because he wanted sons. Asha knew that she could never give up on her two precious daughters. They are her world and she would fight against all odds for them.

“My husband left us. I tried to reason with him, but I had to file for divorce eventually. He remarried soon after our divorce, leaving us with nothing. I wanted to give a good life to my girls, so I got a job in a garments shop. We were slowly doing better, but fate had another tragedy in store for us. Hemashree was diagnosed with cancer, and once again our lives came crashing down.”

Hemashree was diagnosed with Acute Lymphoblastic Leukaemia, a cancer of the blood and bone marrow

Hemashree’s cancer relapsed. She had only 24 hours to get treatment.

Hemashree soon underwent chemotherapy, and Asha was positive that her daughter would be healthy again. Asha’s relief was short lived. To her horror, Hemashree’s cancer was back.

“She had high fever and started to vomit blood. She couldn't even drink a sip of water. I rushed to the doctor and they told me her cancer was back. I sat in silence for a few minutes before I could process the news. They told me she had only 24 hours to get treatment, otherwise, she wouldn’t live.”

Once again, Asha breathed a sigh of relief and hoped that her daughter would finally live a life without injections and medicines, and would spend her days learning and playing instead. However, Hemashree developed a serious infection and needs urgent treatment.

Hemashree unfailingly smiles through the pain and suffering

Little Hemashree has been through a lot of pain, but it hasn’t stopped her from spreading smiles wherever she goes. She makes sure to greet all the doctors and nurses at the hospital, and graciously thanks anyone that visits her.

“She celebrated her sixth birthday in the hospital. She can’t have chocolates or cake but she made sure she bought chocolates for her doctors because she was so thankful for everything they’ve done for her. I’m truly blessed to have a daughter like her. She has been through so much, but she remains my pillar of strength. She often tells me that all she wants to do is grow up and make me proud. I’m afraid that without treatment, she might not have a future.”

Asha was forced to quit her job to take care of Hemashree. With a little help from her brother and crowdfunding, she was able to pay for treatment so far. However, Asha finds herself at a dead-end again. Hemashree needs 4 lakhs to undergo treatment for the next 6 months in the hospital. Asha has gone from pillar to post looking for help, only to return empty-handed. Hemashree and Asha have got through many hurdles with each other’s unrelenting support, but that isn’t enough anymore. They now need your help to make it through this ordeal.


How You Can Help
Hemashree is fighting cancer for the second time now. After a bone-marrow transplant, she developed a serious infection that can be fatal if left untreated. Asha has no means to pay for her daughter’s treatment anymore. With your help, this bright, thoughtful young girl can finally have the childhood she deserves.

Your support will ensure that Hemashree’s treatment is completed and she has a chance of a healthy future.