Help This Brave 4-Year-Old Survive Lymph Node Cancer | Milaap
This is a supporting campaign. Contributions made to this campaign will go towards the main campaign.
This campaign has stopped and can no longer accept donations. 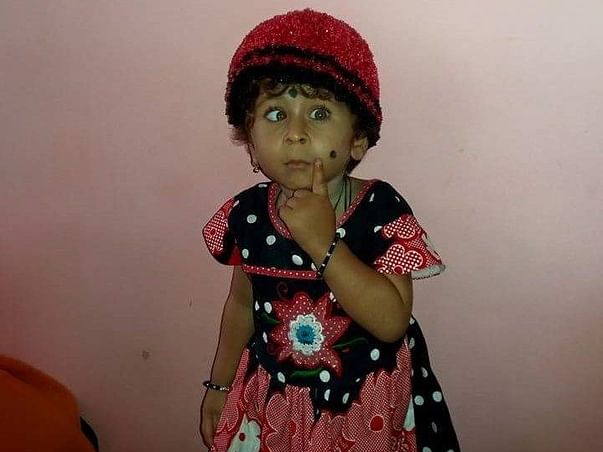 Kruthika (4) has a rare immunodeficiency that has caused multiple health complications and even led to cancer in the lymph nodes. With chemotherapy and a bone-marrow transplant, she has a good chance of making a recovery. Her parents, Manjula and Anand, are in no position to afford their baby's treatment and are desperate for funds.

Anand is an auto-driver, but his health prevents him from working long hours. Every day, he leaves home at 5 a.m., intending to work late so he can earn some extra cash needed for Kruthika's treatment. But every day, by 3 p.m., he begins to feel tired, short of breath and rushes back home to rest so he doesn't fall sick. He can't afford to fall sick right now.
Two weeks back, he learnt that his daughter has Hodgkin Lymphoma – a cancer of the lymph nodes. Not just that – the doctors said it developed because she had the the Hermanshy Pudlak Syndrome and a rare kind of albinism that made her skin and eyes light-coloured.

After losing both his parents at a very young age, Anand always wanted a family of his own so he could have a home again. He got married to his cousin Manjula but they were unable to have a child. After almost giving up hope, they finally had a baby girl who would complete their family.

Kruthika was born 10 years after her parents got married in 2013. Her birth was a happy occassion for the family that had gone through some difficult times. Anand had just gotten a heart surgery. Kruthika was a happy baby and her parents were thrilled that she had inherited her late grandmother's light eyes. But Kruthika fell sick frequently – she would be irritable and developed frequent colds, cough and fever.

More than one doctor told Manjula that sickness was to be expected given that she had married her cousin. Manjul and Anand started to worry for their baby. Their worst fears about their baby's health were soon to come true.

Little Kruthika doesn't yet know that she is sick. She is only able to tell her parents when something hurts. She is otherwise a happy child looking forward to going to school. Her parents don't have the heart to tell her that it may not be possible this year and encourage her to play-act and prepare for school.
Make little Kruthika's dream a reality and help her live long enough to go to school and lead a healthy childhood and a normal life. Contribute now and save Kruthika.
Estimation letter 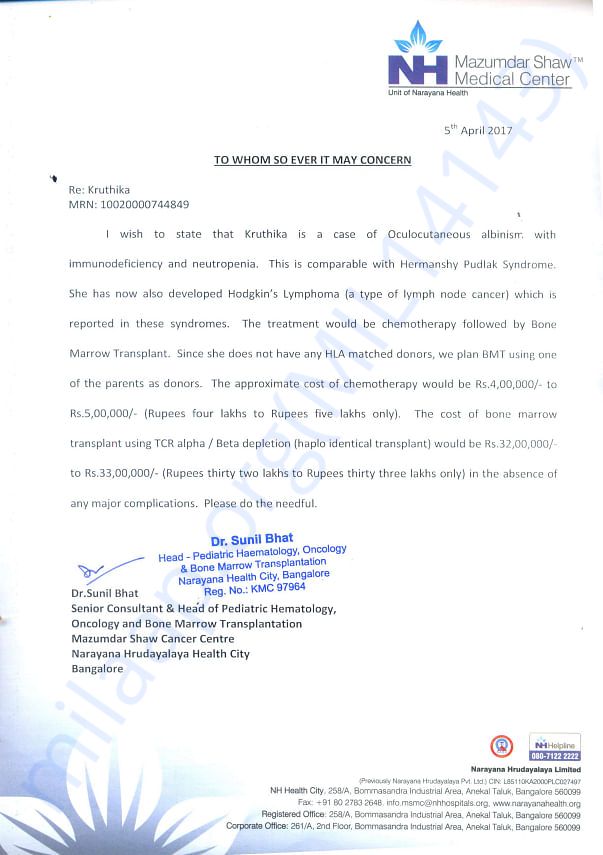 Kruthika passed away on Saturday (September 16th). Our hearts go out to this brave child who endured so much pain and fought so hard for her life. For the past few days, she was struggling to breathe and doctors were working on getting her lungs back to normal.  Unfortunately, her body was unable to take the stress. Your timely support ensured that she received the best medical care.

The family is grateful for all the care and support you’ve shown Kruthika. The past few days have been the most difficult ones for the family. The funds raised through this campaign have been utilized towards her treatment.

Hope they find strength in this time of grief. May Kruthika’s soul find peace. Please keep the family in your prayers.

Kruthika is at doing well now. Her chemotherapy started on 7th April'17. She has to undergo 6 cycles of it, every 15 days.

She is at home and goes to the hospital for her treatment. The doctors have advised her to stay at home as she might develop fever and cold or any other infection from outside.

Thank you for your overwhelming support. Please pray for her recovery. We will keep you posted on her progress.

You are sending a message to
Raghavendra Shetty
Go back 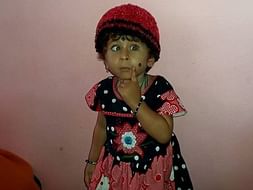