Let's build a model farm at 'Protovillage' | Milaap
Milaap will not charge any fee on your donation to this campaign. 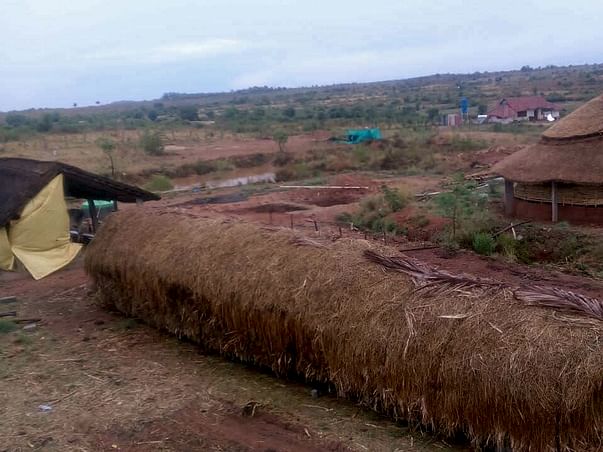 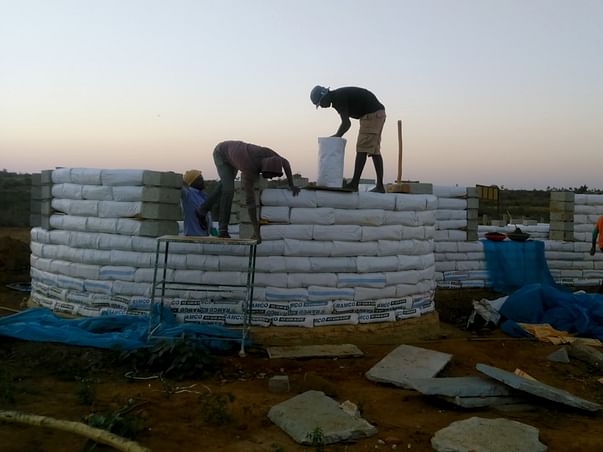 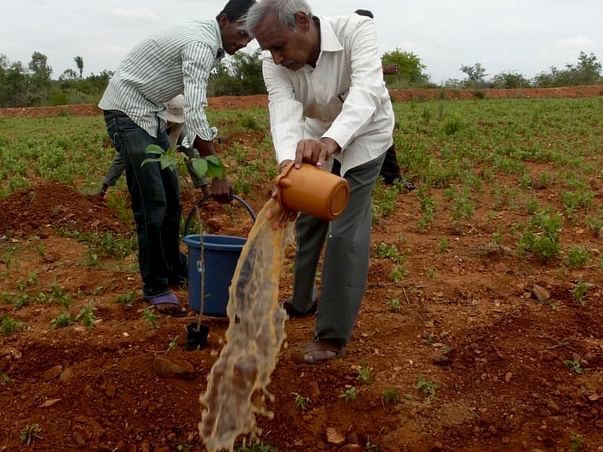 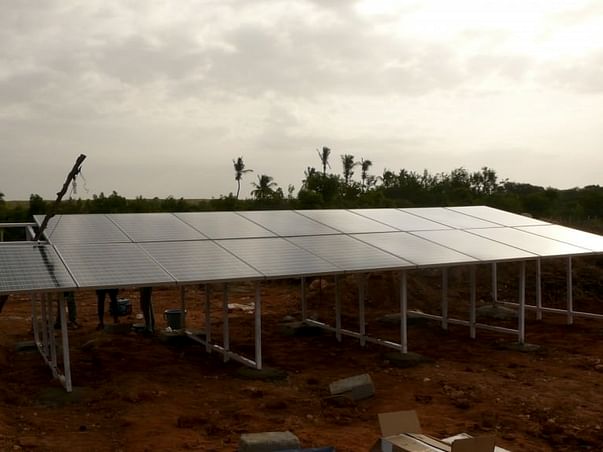 Previous Next
About Myself
I dream of an Abundant rural India, and am delighted to be a part of a team that is working on building the prototype of an Abundant Village - We call it ProtoVillage!
Abundance
Abundance has three building blocks:
a. Self Reliance in terms of 9 basic needs: 1. Food & Water, 2. Shelter, 3. Clothing, 4. Healthcare, 5. Energy, 6. Connectivity, 7. Trade, 8. Education and 9. Disaster Management

c. Respect for Soil, Air and Water, and all the life they carry.

To sum up, Abundance is a state in which a community employs ecologically sustainable means to ensure a resilient access to resources that are necessary and sufficient to fulfill the 9 basic needs of all its inhabitants.

ProtoVillage
After traveling through rural India for 2.5 years, in the August of 2010, I started living in a remote village called Tekulodu, Chilamathur Mandal, in the second driest and one of the poorest districts in India (Anantapur district, Andhra Pradesh) where even subsistence farming is on the edge of collapse.
After one year of blending into the village, I apprenticed with one of the poorest families in the village  for 2.5 years during which the family grew from Rs 7500 per annum to a steady Rs 14,000 per month, built a hand-made wind turbine that generates 500W, and got used to growing most of what it eats. We consider this one unit of Abundance.

In 2014, we began work on building the prototype of an abundant rural community.
Being set up in 12.5 acres of land, ProtoVillage is the prototype of an Abundant village, being built by the villagers, for the villagers. It will be a center for learning, practice, demonstration and dissemination of the knowledge on how any community in this region can organize itself to be Socially cohesive, Ecologically sustainable and Economically viable.
How you can help
We are demonstrating natural farming by setting up a model farm of 4 acres within Protovillage.  Protovillage is currently in need of funding to support the earthworks on the model farm. The earthworks enhance the water holding capacity of the land, and allow intensely productive bio-diversity to thrive. As with everything else at ProtoVillage, the purpose of the model farm is to demonstrate methods that are earth friendly and keep the knowledge open. Villagers will be trained free of cost in these practices and this will improve their health along with providing healthy food for customers.
Why do we need a demonstrative village?
The glamorization of urban life is robbing the villages off their youth. The rich traditional knowledge suddenly has no takers, and the keepers of the same are dying. Stuck in the current paradigms of consumption driven growth, rural India is getting dangerously close to becoming intellectually bankrupt... The loss of this knowledge is reducing the self-reliant “providers” into helpless “consumers”.

On the other hand, Abundance is a steady state of resilience that breaks away from the paradigm of limitless economic growth. It requires that we adopt a lifestyle that is more respectful of all life around us.

Attempts to tinker the existing systems and paradigms will need methods that dissipate a lot of energy (Confrontation, Activism etc). We chose the methods of the noble elders who got us our independence - To DEMONSTRATE a new possibility, and trust the collective intelligence to take it forward... To be the change we wish to see.

We therefore are working on building the prototype of a community based on what we deem to be the traditions for the future.

Just in case you are interested in the Story
I quit the corporate world having gotten bored of the idea of spending precious parts of my ONLY life to make a rich company richer. This decision gave me the opportunity to explore the country I called mine, but never knew much about. I then traveled for 2.5 years across rural India, more often than not, staying true to two simple principles - 1. Shouldn't need to pay for my food, and 2. Shouldn't need to pay for my stay. For someone who had hardly ever volunteered for a social cause till then, this turned out to be not only a fascinating adventure, but more importantly an amazing learning experience.
The scores of families I lived with during my journey through rural India were all below the so called poverty line. I survived on the love and generosity of these families, and having seen their stories of pain and glory and the beauty they are capable of, I thought it was absurd to treat them as dots on a plot, incidentally below a certain line.
Initially, I was shocked and saddened to know that there were 440 million people below that line. That meant, 440 million people in India were not capable of spending $1.25 a day!!! As I thought more and more, it all summed up into a couple of observations that helped me find a direction:
If we somehow figured out a way to ensure that everyone on this planet suddenly became capable of spending more than $1.25 a day, will that lead to a happy planet? Also, if it is $1.25 today, it will be $2.5 tomorrow and some other number eventually... will the pyramid ever cease to have a bottom? Aren't we being ridiculously reductionistic?
The idea of poverty eradication in such terms seemed to me like trying to do a world trip, but on a treadmill.

Not interested in poverty eradication - Let's instead Create Abundance!
I spent close to 10 months in the tribal belt that extends from Kuchchh in the far west all the way to the Sunderbans in the east. I was inspired to see that these people (supposed to be the underdeveloped and backward communities) were living the answers to many questions we ought to ask, but haven't even begun to ask. They were living in what I began to call "Abundance" that owed little of itself to material riches.

I found the idea of CREATING ABUNDANCE more inspiring and empowering than that of ERADICATING POVERTY.

The model farm will occupy 4 acres out of the 12.5 acres of Protovillage. The remaining 8.5 acres will house a residential cluster, a community kitchen, a trade zone, ponds, a school and a sacred zone. The ponds will occupy an area of almost 1 acre. The community kitchen is already under construction. All the construction material used in the buildings will be totally earth-friendly, Kalyan says.

The sacred zone, which will occupy 2.5 acres, is a cluster where no produce of benefit will be derived by the village populace. While there will be a give and take relationship of the villagers with all other clusters, nothing will be taken out from the sacred zone. As of now, various varieties of plants are being planted in this cluster to ensure greenery in the village.

Kalyan has interestingly named the trade zone as REZ. REZ stands for Rural Economic Zone which will be a hub of maximum economic activity in the village. Processing of agricultural produce, production of goods such as nutri bars, napkins out of only organic material are already in the pipeline.
Let’s wish Kalyan all the best in building the self sustainable ProtoVillage.
Donate
OR

Donated to this campaign via Bank transfer/QR Code? Click here if you can’t find your donation listed below.
SB
Satyajeet donated Rs.1,000

Extremely happy to be part of this project in some way

Read about it, its an inspirational move, wish in future sometime will be part of your project

Good Luck Kalyan.I would like to visit the place once.

Kalyan, Great work...with all the right ingredients... without all the preachings n prescriptions. Way to go. Scale out rather than scale up as you said in TEDx. May your tribe grow and resolve strengthened

All the best, would like to be there once.

Donated to this campaign via Bank transfer/QR Code? Click here if you can’t find your donation listed below.
SB
Satyajeet donated Rs.1,000

Extremely happy to be part of this project in some way

Read about it, its an inspirational move, wish in future sometime will be part of your project

Good Luck Kalyan.I would like to visit the place once.

Kalyan, Great work...with all the right ingredients... without all the preachings n prescriptions. Way to go. Scale out rather than scale up as you said in TEDx. May your tribe grow and resolve strengthened

All the best, would like to be there once. 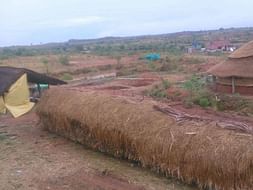