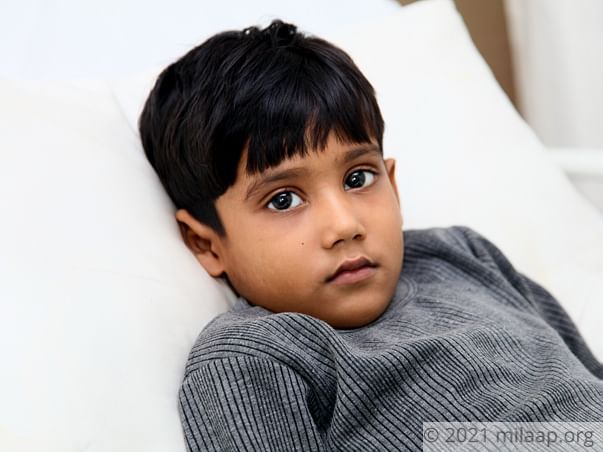 Share
Every time Priyanshu takes a chemotherapy injection, he is in excruciating pain for the next two days. He clings to his mother the whole day and cries to go back to his grandfather back home. His parents Pronoy and Pali struggle to calm him and dread the day that they are actually forced to take him back before his treatment for lack of money.
Priyanshu's stomach ache turned out to be cancer

Till he fell sick, nothing could keep Priyanshu down. Strong-minded and fun-loving – Priyanshu is the 'naughty' boy of his neighbourhood. But three months back, he got a bad fever and stomach pain. Shocked at his condition, his parents rushed him to the nearest hospital.

Priyanshu did get better but fell sick soon again. “He would fall down crying of stomach pain. Added to that was a fever. He took medicines but the pain and fever always came back. A neighbour recommended a hospital in Bangalore. He is our only child – we had to do whatever it took,” said his father Pronoy.
Priyanshu got to Bangalore last month and to his parents' horror was diagnosed with a rare kidney cancer. He needed an immediate surgery and start chemotherapy. Pronoy and his father took loans of over Rs 2 lakhs and got the treatment started. But this is only the beginning and Priyanshu needs at least another 6-7 months of treatment.

Pronoy works in a shop near his village as a helper. To stay back in Bangalore meant losing his job – something he cannot afford to do at the moment. Pali and Priyanshu are in Bangalore by themselves for treatment. Despite their best efforts, the family is struggling to meet expenses.
Priyanshu is responding well to chemotherapy, but the family's challenges are only starting

Priyanshu's cancer Wilm's Tumor is a fast-growing cancer of the kidney the develops in children. It is fast growing, but very curable. While there was a two-month delay in starting treatment, Priyanshu is responding very well to the treatment. His parents only hope is that they somehow manage to complete the course.

“When people heard my son had cancer – everyone came to help us. My employer also gave me a big loan. We collected Rs 2 lakhs but it is all gone. My wife and son are alone there – struggling to get by, living in a small room. Every time he comes back after an injection – it really hurts my son. It hurts him so much,” says an upset Pronoy.
Pronoy is desperate for some help that will let him save his child and take away his pain. It is a very difficult time for his everyone in his family and they are all waiting for the treatment to be successful.

Pronoy wanted to give his child the best life. He never imagined he would be unable to even get him the treatment that will save his life. Pronoy earns Rs 8,000 every month and everything he earns is being sent to Pali and Priyanshu in Bangalore. It is still not enough and he needs another Rs 7 lakhs for treatment alone.

Contribute to help Priyanshu get the treatment he needs to live.

Donate
0%
Be the first one to donate
Need Rs.700,000
Card, Netbanking, Cheque pickups
Or Donate using