This Young Boy Needs Urgent Help To Fight Blood Cancer | Milaap
This is a supporting campaign. Contributions made to this campaign will go towards the main campaign.
Milaap will not charge any fee on your donation to this campaign. 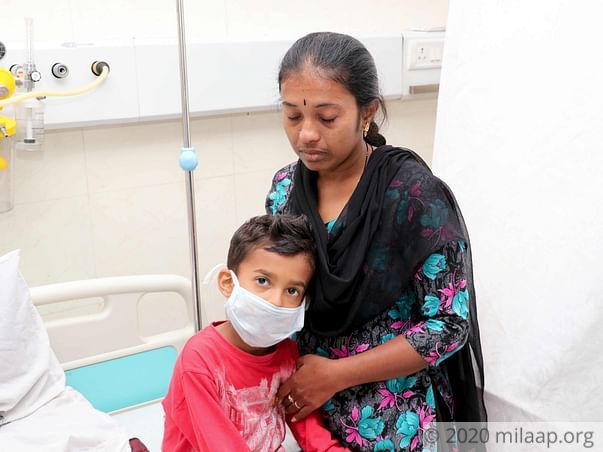 “Amma, can I take chocolates for my friends in school tomorrow?” Chandan asked his mother, Nagamani, as she tucked him into bed the night before his sixth birthday. But Chandan couldn’t take chocolates for his friends or go to school, instead, he spent his birthday in the cancer ward, getting chemotherapy. As he was poked with painful needles for blood tests, all he could do was lie still, tears welled up in his eyes “I’m a big boy now, I won’t cry. I have to be strong,” he says squeezing his eyes shut, and Nagamani couldn't help but break down. Cancer is making her son weaker as the days pass by, and he struggles helplessly in pain and discomfort. Chemotherapy is the only thing that can save him.

Oblivious to the dangers of cancer, Chandan thinks he’s sick because he didn’t eat his vegetables

Dussehra was a welcomed holiday for Nagamani, Manjunath and their two sons. Their older son (13) came back home from his hostel, and Chandan was thrilled to have his big brother around to play with. However, a day into the holidays, Chandan started feeling sick. One night after dinner with the family, he started vomiting. Soon, he was in bed with a high fever. His fever and vomiting were, unfortunately, symptoms of a life-threatening disease – blood cancer.


“Now when I think about it, for the past few weeks, he’s been coming back home saying he didn’t feel like doing his homework. I thought he was just being stubborn, little did I know that it’s because he was tired and in pain. He was diagnosed earlier this month, and we’ve been taking him to the hospital for chemotherapy. He thinks he’s in the hospital because he didn’t eat his vegetables properly. He tells me that he will eat properly and go back home. He doesn’t know how dangerous his disease is.” – Nagamani, 6-year-old Chandan's mother.

His father is the sole breadwinner of this family of 4, and the treatment costing lakhs is beyond his means

Every time Nagamani and Manjunath wait for his test results, they can’t help but think about the time they found out he has cancer. They didn’t think twice before using all their savings to start his treatment, but now, they can’t seem to find a way to continue his chemotherapy.


“I used to work in a garment factory, but I stopped when I was pregnant with Chandu. Now, my husband is the only earning member of the family. He works in a paint factory and earns a minimal amount.”

Nagamani and Manjunath have spent nearly 60,000 for his treatment so far, and can’t afford the 5.5 lakhs required for his chemotherapy for the next 6 months.

All Chandan asked for his birthday were new colour pencils that he could use to draw, and now, he carries it with him every time he goes to the hospital. Chandan has deadly blood cancer, but he’s responding well to chemotherapy. Unfortunately, if his parents are unable to continue his treatment for 6 months longer, all their efforts so far will be in vain. His parents are completely helpless and need your help to save their son. 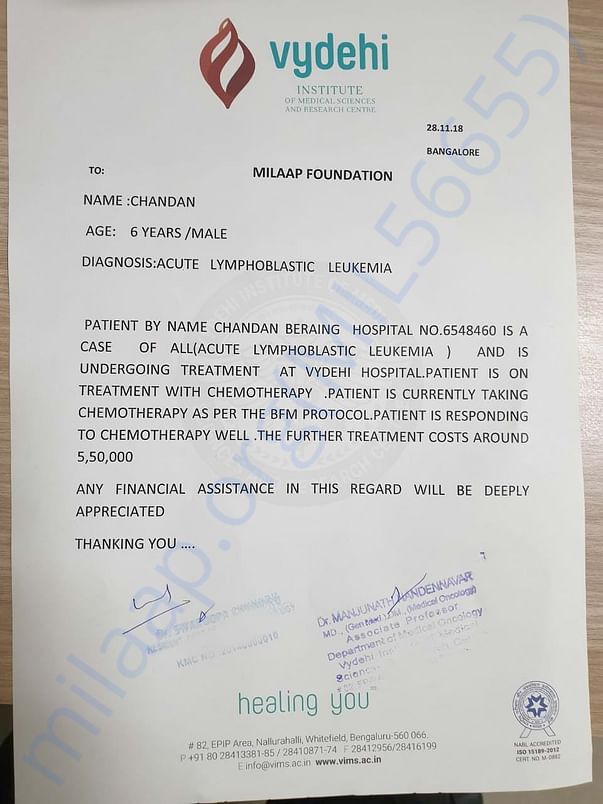 Ask for an update
Donated to this campaign via Paytm or bank transfer? Click here if you have not received an email confirmation from Milaap.
Dear  Supporters

I thank each one of you in a very special way for your generous contributions towards the treatment of Baby Chandan.

He is responding well to the treatment. The prognosis is good and is still on Chemotherapy.

Chandan is in admitted in the hospital. He is undergoing his 2nd course of chemotherapy. It has been 2 months 10 days. The doctor has suggested 5 more sets of chemotherapy. He was suffering from fever hence doctors have started medication for same. He is stable and good now.

Donated to this campaign via Bank transfer/QR Code? Click here if you can’t find your donation listed below.
KK
KARTHIK K donated Rs.5,000

Donated to this campaign via Bank transfer/QR Code? Click here if you can’t find your donation listed below.
KK
KARTHIK K donated Rs.5,000

R
You are sending a message to
Raj
Go back 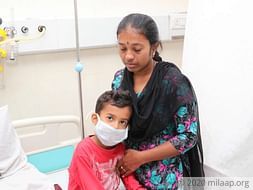