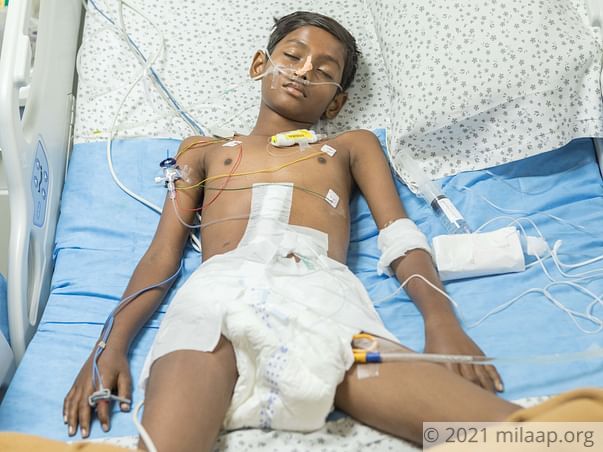 He survives on saline and is no longer conscious. Prajwal is slipping away from us. We take turns to visit the hospital as we cannot afford a room. It's been 20 days. We have been staying in the waiting hall of the hospital. We don't really care about food or sleep - only Prajwal.

12-year-old Prajwal is lying in the hospital bed unconscious for days now. He has already undergone 4 surgeries in a span of just a year and is still striving to live. His parents Basavraj and Vijaylakshmi are sitting in the waiting hall of the hospital for a month now waiting for him come out of the ICU alive.

The disease was not caught in time costing Prajwal his life

Since his early childhood days, Prajwal used to vomit once in a while. The parents mistook it for overeating and digestion problem for a long time. Only in last year July, Prajwal started vomiting unstoppably which was green in color.

Tests revealed that the young child has intestinal malrotation, which means there is a blockage in the intestinal tract. Prajwal had difficulty in eating and difficulty in pooping. The doctors said he needed corrective surgeries to remove the blockages.

After 9 months of his recovery from surgery, Prajwal complained about severe stomach ache in March. Soon the vomiting started again. It was green again. Nothing was passing through his intestine, not even bile.


When he wakes up, he tells us that he cannot take it anymore. It feels like he is asking us to let go. My son wants to grow up and be a doctor to help others like himself. He wants to go to school. I will not let this disease take his dreams from him.

Both parents work throughout the day to educate their children

Basavraj is an electrician from Bangalore. Vijaylakshmi spends most of her time taking care of Prajwal, 9-year-old Praveen, and 7-year-old Prakruti. Whatever little time she is left with she engages in tailoring job so that she can add a little income to the family.

The cost of saving Prajwal now is Rs 5 lakhs and he’ll not make it without the intensive care. His parents just exhausted Rs. 3 lakhs on ICU care for the past two weeks. They know they are running out of time. Ifhe does not stay in the ICU for a few weeks, Prajwal's stools will end up poisoning him to death.

Your contribution can help this young man beat this dreadful disease and grow up to be a doctor.