Hyderabad Man Rescued Over 1600 Elderly Homeless &amp; Gave Them New Life | Milaap
This is a supporting campaign. Contributions made to this campaign will go towards the main campaign.
Milaap will not charge any fee on your donation to this campaign.
Hyderabad Man Rescued Over 1600 Elderly Homeless & Gave Them New Life 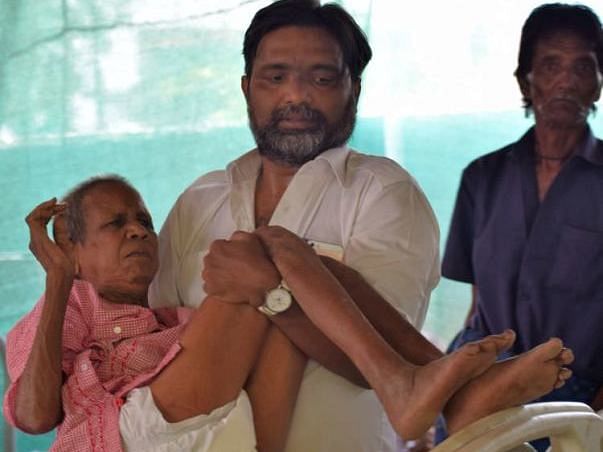 Share
"Everybody deserves to live with dignity. They also deserve to die with dignity." - George Rakesh Babu
George Rakesh Babu’s day starts early. He goes around the city in his van, rescuing elderly people, who are abandoned, homeless, or sick. He takes them straight to one of his three ‘Good Samaritans India Shelter Homes’ in Hyderabad, Warangal and Aler districts of Telangana. If, unfortunately, somebody dies during the rescue (as a result of dehydration or starvation despite his best efforts) or even at the homes later, he performs their final rites as well.

“Once a person becomes old, they are considered ‘useless’. But whatever life they have left, has value – I want to show them that. At all of our homes, every person is treated with the kindness and respect that they deserve. Their smiles give me the strength to continue this work." - George

George’s life was shaped by an incident that happened way back in 2011. He came across a Tamil priest who was striving hard to run an orphanage of more than 60 kids. The priest was particularly worried as the landlord of the building that housed the orphanage had been demanding him to pay rent or face eviction– but the priest was short on funds due to a financial crisis. George decided to help and within a few days, arranged for the children to be relocated to other orphanages in the city and for the priest to be looked after at a rented house. But it was too late. Before George could get to the priest and take him to his new home, he died from cardiac arrest.

“The worst part was finding a place to lay him to rest. I traveled all over the city, requesting funeral homes to agree to bury him. I was shocked that nobody agreed. Finally we found a crematorium that did, and he was buried. I still remember the cries of the orphan children who had gathered to bid their ‘father’ goodbye. That’s when I pledged to lead a life for the elderly whom society ignores. Today, I am proud to say that our organisation is the only one in India that rescues dying people.”

Not just rescue, but complete rehabilitation

Once George and his volunteers are notified about destitute people or once they come across people languishing on the roads, the first step is administering basic first aid and checking for other illnesses before taking them to one of the shelter homes. The shelter-home at Aler, "Pannah" is exclusively for destitute women. The most sick and the dying are given shelter at the Dundigal, Hyderabad shelter home while the healthier ones are given resources at the Warangal shelter. Each and every one of the inmates are given clean and hygienic living conditions, with 24/7 medical attention and access to a free clinic as well. More than anything else, they are given love and care – something that they lived without for years.

“If somebody gives us the whereabouts of any destitute person and requests us to rescue them, we never say no. We never say that there is a lack of beds or give any other excuse. We even track down the families of ‘lost’ destitute elderly persons at their request. We even help the healthier inmates to take up vocations of their interest – like poultry farming, becoming watchmen, etc. They want to support themselves. Age should never be a reason for them to feel helpless. We are a big happy family,”-says George who has rescued over 1600 people till now.

Now George dreams of starting a shelter home in every district of Telangana and wants to spread operations to rest of the country too in a few years. He also wants to create awareness among people on how to reach out to shelter homes and the police when they spot an abandoned elderly person on the streets. The only obstacle in his way is funds. After quitting his job as an event manager to establish Good Samaritans India, he has been dependent on his wife’s salary (she works as a teacher) and also on the mercy and kindness of friends. He is looking for contributions on many fronts to continue his good work. You can choose to contribute to one of his shelter homes, individual rescue operations, food and provisions, health care and even last rites of the inmates.

“I want to do this because there are thousands of elders living on the streets. Their own families abandon them. I want to save them. I want them to know that they are not alone in life. That they won't be alone in death. But it is not practical without funds. I will make sure that every rupee you contribute is used to make their life better and treat them with dignity when they move ok from this world. ”-George