Mother Who Donated Her Kidney To Her Son Fears She Might Lose Him | Milaap
This is a supporting campaign. Contributions made to this campaign will go towards the main campaign.
This campaign has stopped and can no longer accept donations. 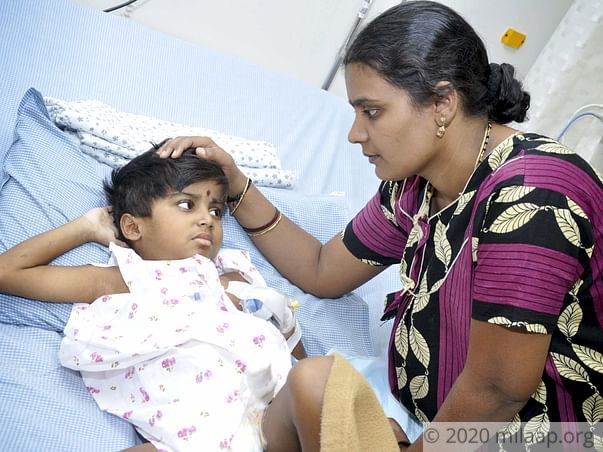 Gowtham is 5 year old and he needs to undergo 6 hour long dialysis process everyday because of his damaged kidneys. For the past 6 months, he has been going through so much that he has lost the smile on his face. He’s thirsty most of the time but he’s only allowed to drink 700 ml of water. Every time the nurse tries to give him pills, he would be screaming in pain until his mother Rajeshwari comes and holds him in her arms.

Gowtham underwent kidney transplant a few weeks back, his mother was the donor. But post transplant, he got severe infection that needs treatment immediately. But after exhausting everything they had, poor parents are in need of help to save him.

Gowtham was a very cheerful and energetic child and he was always excited about going to school with his twin brother Dhanadakshay. He just started going to school in the month of June but a month later Rajesh and Rajeshwari got worried when Gowtham started having nose bleeds. When consulted the doctor, they were told that Gowtham was anaemic and his BP was high. He also started having swelling in his arms and legs.


“We thought it was nothing serious until the doctor ran some tests and told us that his kidneys were failing. We were shocked and in tears.” - Rajeshwari, mother

Gowtham was immediately was kept under dialysis. He underwent dialysis for 5 months hoping his kidneys would start functioning normally. But it wasn’t. He was left with only one option - a kidney transplant. Fortunately his mother was the suitable donor. With the help of their relatives, the parents could arrange funds for the transplant. Gowtham underwent kidney transplant a few weeks back and it was successful.

But a few days after the surgery, Gowtham was diagnosed with thrombotic microangiopathy, a rare but serious medical disease where blood vessels of vital organs are damaged. Gowtham needs to continue his treatment in the hospital to recover from this dreadful infection.


“I thought with the transplant everything will be fine with him. But few days after the transplant we were told that he has an infection that will spread rapidly if not treated. He is longing to play with his brother and to go to school." - Rajeshwari, mother.

Rajesh works in a private company earning a decent income to look after his family. After knowing about his son’s failing kidneys, all his relatives have come together and helped him with about Rs 25 lakhs for the transplant.

“The past few weeks have been really difficult for us. My relatives have been supporting me all this while. But now even they are not in a position to support us. I need to look after Goutham and Rajeshwari who are still recovering from the surgery. I don’t know how to arrange money.” - Rajesh, father

“I have even donated my kidney hoping that my son will have a healthy life. But he has one more infection to fight and we have exhausted everything we had. Now, it’s beyond our reach to arrange Rs 26 lakhs for his treatment.” - Rajeshwari, mother

Gowtham has only known pain for the past 6 months. All he wants is to go home and play with his brother. His mother Rajeshwari is still recovering from the surgery. And despite the pain, she's staying strong for her son. He needs treatment to fight this infection and he can only it with your help.
Estimation letter 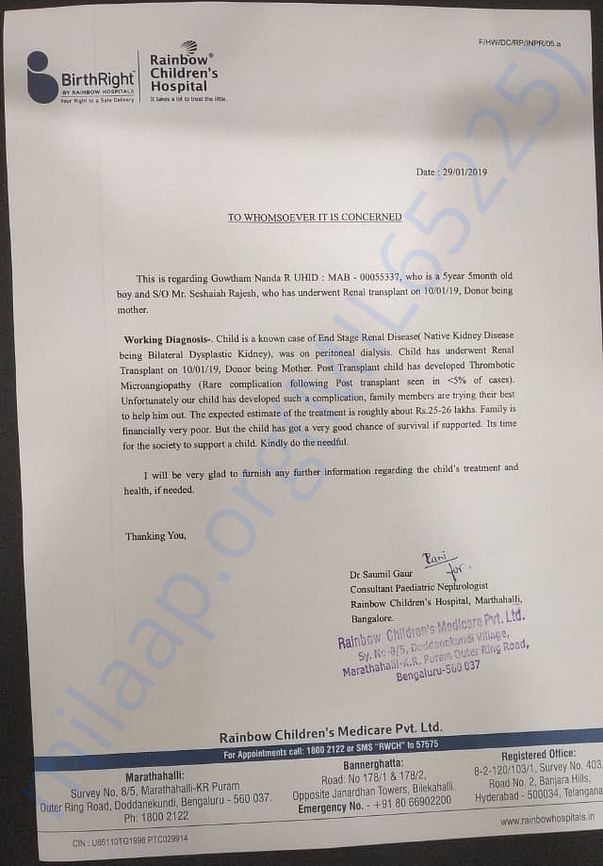 Thank you all for your support. Gowtham is doing well now. He is receiving treatment every 10 days.

We again thank you all for your support.

Gowtham is doing well. His health is improving and is getting better. He is recovering and is responding well to the treatment.

Donated to this campaign via Paytm? Click here if you can’t find your donation listed below.
K
Kaavya donated Rs.2,000

You will Get Well Soon.

Donated to this campaign via Paytm? Click here if you can’t find your donation listed below.
K
Kaavya donated Rs.2,000

You will Get Well Soon.

You are sending a message to
Pankaj Chaudhari
Go back 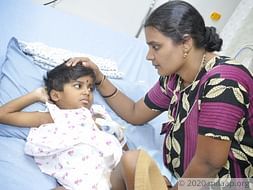