Share
With the country under a strict lockdown to combat the COVID-19 impact, lakhs of migrant labourers, daily wage earners and the homeless are going without food, or shelter, for days.

In these difficult times, India is witnessing the inspiring work of many changemakers who are putting their own lives at stake, to provide food, ration, money, shelter and support to those in need. These are people who are placing humanity over all else and making sure they leave no stone unturned when it comes to giving everyone an equal chance to fight this crisis. 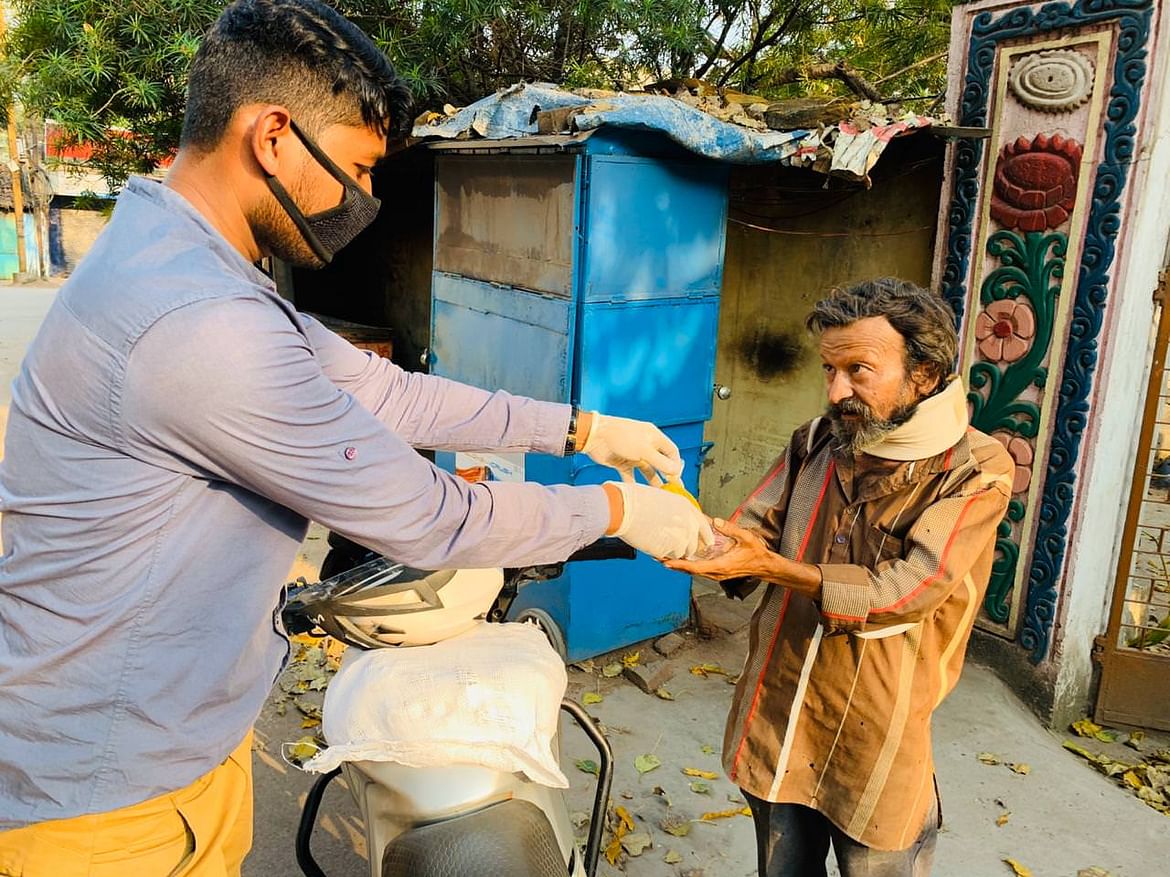 Among them are many civil service officers who are pushing themselves to the utmost to help the underprivileged. From Maharashtra to Meghalaya, these officers are working relentlessly to provide ration kits to daily wage earners, provide shelter for stranded migrant workers, spread awareness about COVID-19 in their districts, and so much more.

The Better India lauds their commendable endeavours and is supporting them by launching a campaign to raise funds for the initiatives of such officers. The Better India's "BETTER TOGETHER" initiative has brought together civil service officers from across the country as they help migrant labourers, daily wage earners, frontline health workers, and all those who need our help most in these troubled times.

Our IAS and IRS officers are on the ground helping the most needy survive this crisis and get back on their feet. They are helping migrant labourers, daily wage earners and frontline workers so that the system doesn't collapse and India does not slip into the jaws of poverty once again.

With “Better Together” we are now making it possible for our readers to support them with access to ration kits, food, and more on a daily basis. Here's more about their work: 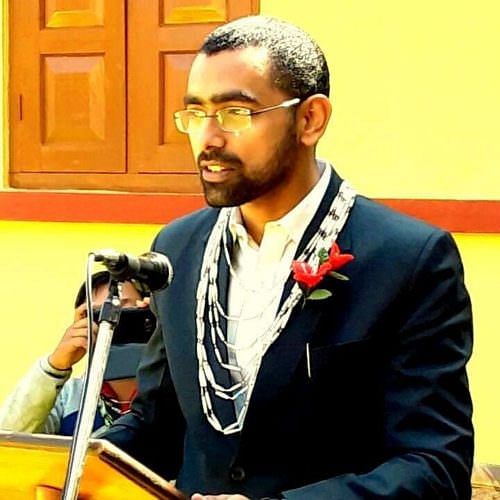 Well known for his recurrent humanitarian endeavours, Deputy Commissioner of East Garo Hills, Swapnil Tembe has been championing social development since his posting in 2015.

Speaking to The Better India, Tembe shares, “Though there are no confirmed case reports (of COVID-19) in this region yet, the curfew for the past two weeks is driving hand-to-mouth people into desperation. Many of them are not officially registered with the labour department or do not have bank accounts to avail the government ration benefits.”

Ever since the lockdown, several such families had been flocking to Tembe’s office seeking urgent support. During a ground survey in a few settlements, his encounter with abject poverty also served as a critical motivator for his initiative.

To help, Tembe is donating food rations to these helpless families, including a few migrant workers from Assam who are stranded there, indefinitely.

“I was approached by a differently-abled man, who is now finding himself at an edge after his small mobile repair shack closed down due to the lockdown. So, I have also planned to identify and serve such people with disabilities who are struggling at the moment,” reveals Tembe.

He has roped in the local self-help group Achik Chadambe, which is coordinating the on-ground distribution of necessities like rice, pulses and salt. 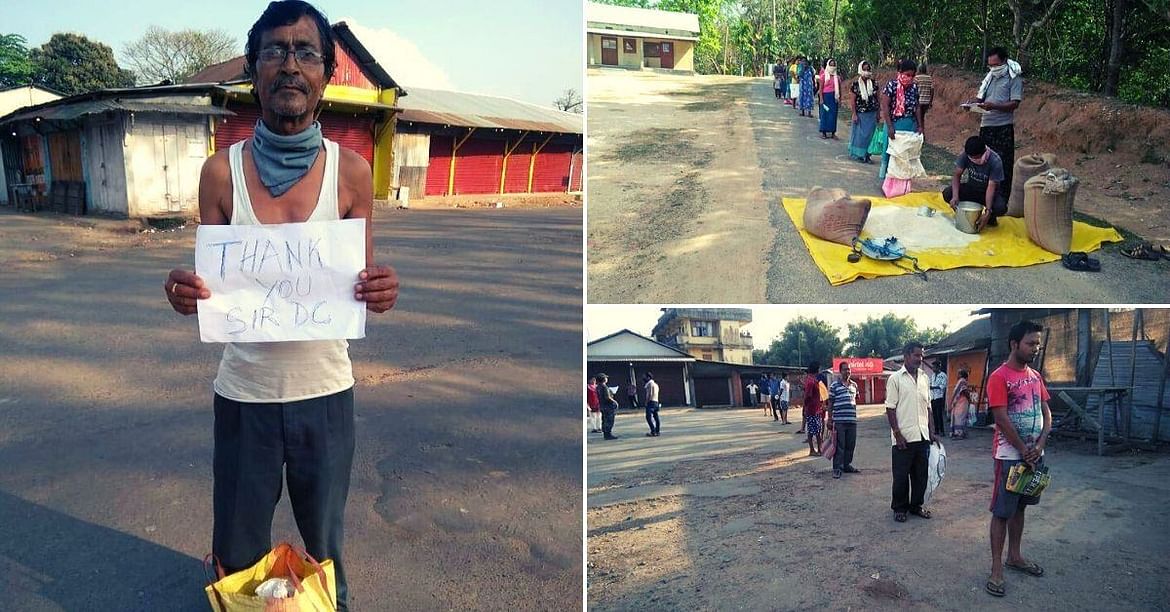 Managed by local youth entrepreneur Bonkey R Marak, the group has supported the distressed in several crises. Presently, upon Tembe’s orders, 5 kg of rice, 2-3 kgs of pulses and 1 kg of salt is being donated per household, depending on the size of the household and weekly requirement.

Through the fundraiser, Tembe aims to reach out to more than 2000 deprived families as soon as possible. He is raising Rs. 8 Lakh with #RiseAgainstCOVID19 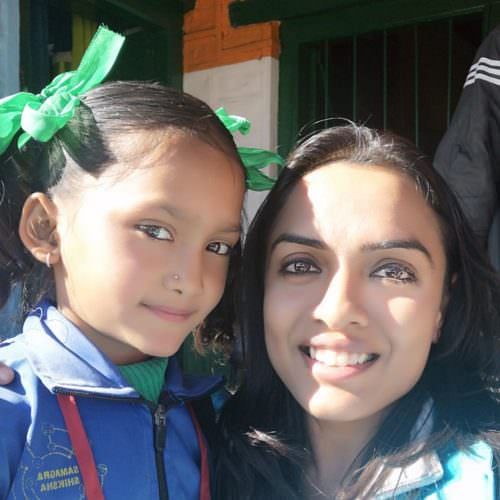 The economic heart of India is perhaps the worst-affected in the country, with the latest reports accounting for over 700 cases in the city. Mumbai’s Deputy Income Tax Commissioner Dr Megha Bhargava is on a war footing on behalf of migrant worker families stranded throughout the city.

Through her NGO Samarpan, the former dentist has distributed 2666 food and sanitary kits so far, amid the lockdown.

“The NGO was founded in 2017 by a group of doctors and civil servants in my network, including my sister Dr Ruma Bhargava, my friend Dr Rahul Tagare, and IRS Officer Suresh Kataria, among others. We have been working in two verticals - the education sector and primary healthcare. Till now, we have managed to impact over 10,000 lives in rural and tribal interiors of Maharashtra, Rajasthan and Uttarakhand,” Dr Bhargava briefs about her NGO.

Together with her department officials, Mumbai Police and Brihanmumbai Municipal Corporation, Dr Bhargava is working day and night to deliver the rations and sanitary kits to the doorsteps of these families, including the residents of Dharavi slums.

She has also provided 1000 bottles of hand sanitizer and over 1300 face masks to the police personnel deployed on the ground, who are making her initiative a success. With the help of the #RiseAgainstCOVID19, Dr Bhargava’s NGO plans to provide food and sanitary kits to 10,000 families, which are estimated to last them for a month. 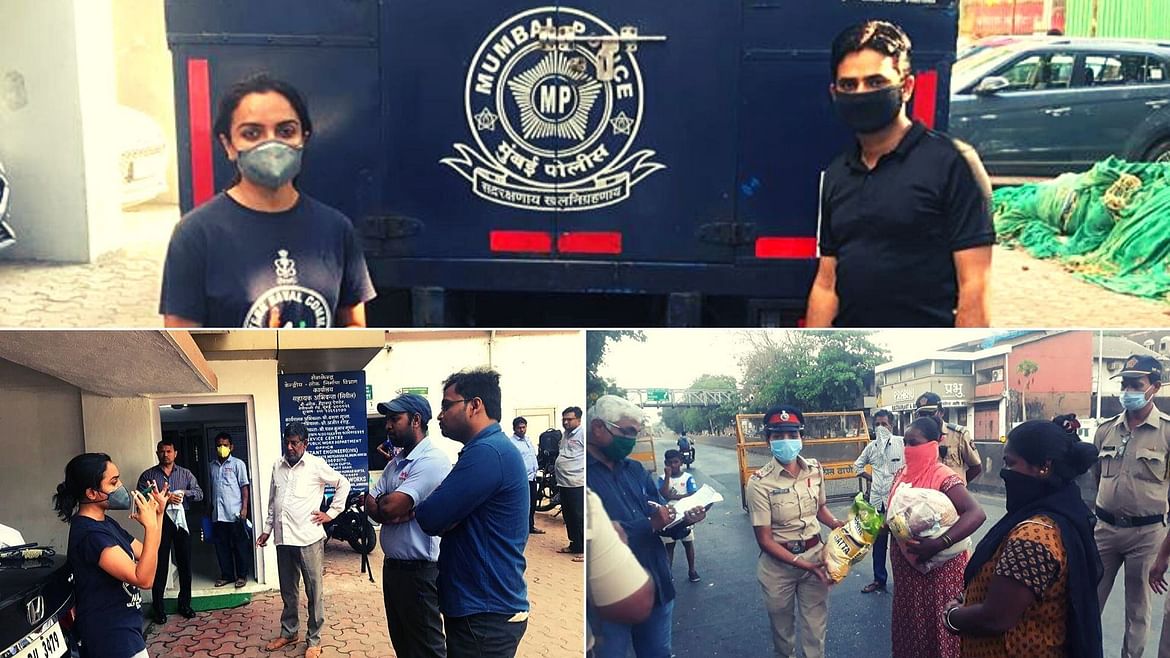 Priced at Rs 1000, each kit comprises of 5 kg of flour, 3 kg of rice, 3 kg of pulses (1 kg each of Masoor, Chana and Black Chana), 1 Kg Sugar, 1 Ltr cooking oil, 1 kg salt and 200 gms each of turmeric, chilli, coriander and basic ground spices. Besides, a sanitary kit consisting of toilet soaps, hand sanitizers and face mask.You can help Dr Bhargava reach her target amount of Rs 25 Lakh to ensure migrant workers in Mumbai do not face starvation or health hazards. 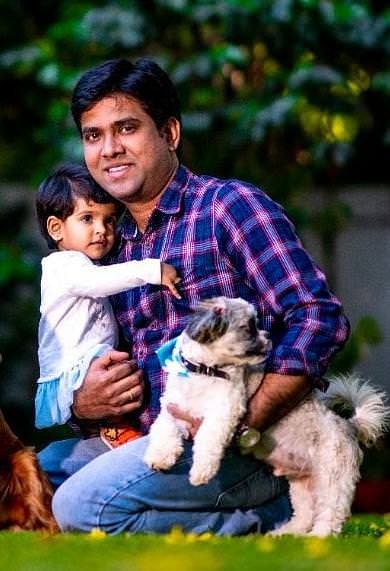 Bengaluru was one of the first cities in India to report a rapid spike in Coronavirus cases, leading to a prompt lockdown. This has left more than 13000 migrant workers and their families in the city with no work and no food supply.

Nishant K, Joint Commissioner of Income Tax, Bengaluru, is one of the first responders to aid these helpless families. Together with around 20 IRS officers from his department, he started distributing hot meals to around 1800 migrant workers near Bommanasandra.

After the nationwide lockdown began, he and his colleagues rapidly upscaled their endeavours and are currently catering to 13,050 people daily. 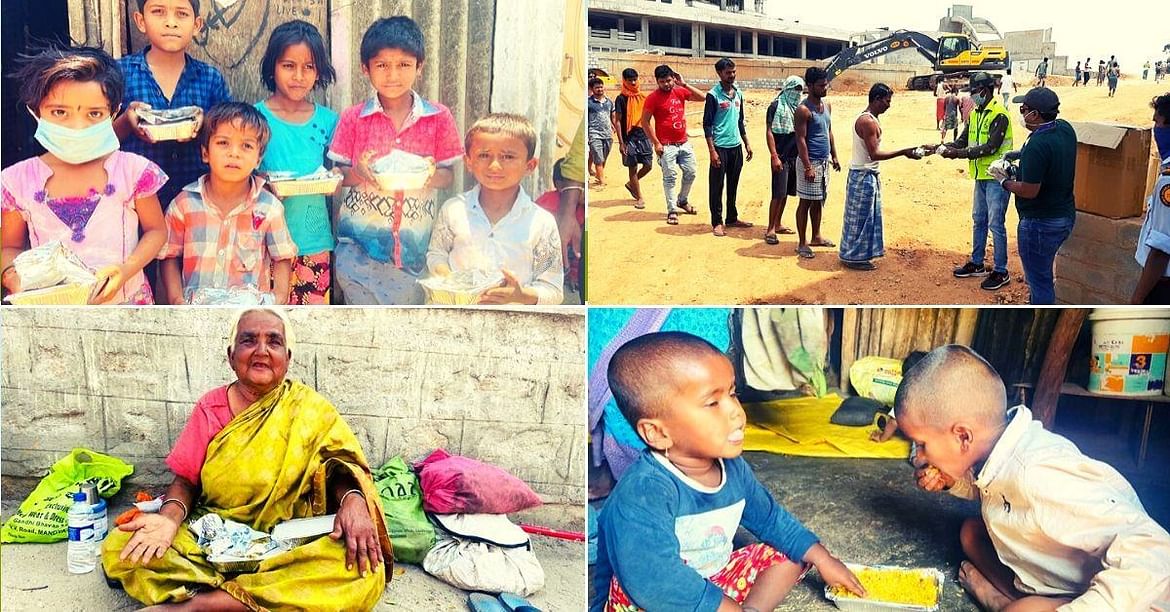 “Initially, we approached the Railway Canteen to prepare food for around 2500 people. But soon, with the help of BBMP, we identified the thousands of helpless people starving in different pockets of the city. So, we escalated our efforts by joining hands with NGOs Lifeline Foundation and ATRIA since March 31,” says Nivya Shetty, the Assistant Income Tax Commissioner of Bengaluru, who is a part of the team.
Every day, the food is prepared in 5 centres - including the Railway Canteen, Karnataka State Cricket Association canteens and three individual well-wishers who are cooking in personal capacities. After that, volunteers of Lifeline and ATRIA hand it over to the Bengaluru police personnel for door-to-door distribution. Finally, around 30 police officials deliver the food in 15 locations across the city.

The total approximate expense incurred daily stands at around Rs 4 lakh, considering the average cost of one plate as Rs 30. For raising funds, Nishant and his team is collaborating with Dr Megha Bhargava’s NGO Samarpan, which is then redirecting a section of their collections for Bengaluru. She is also urging people in her social media circles to donate graciously to the cause.

Presently, with The Better India, they are targeting to raise around Rs 25 Lakh to help sustain her initiative.

In the state capital of Chhattisgarh, Municipal Commissioner Saurabh Kumar is arranging for ration kits for around 17,500 families of daily wage labourers. His initiative is also facilitating stranded migrant labourers from other remote parts of the state or the neighbouring state of Odisha.

“It was difficult for the administration to arrange for a bulk amount of rations overnight, had the millers in the city not stepped in. Upon our request, the rice and pulse millers in Raipur promptly donated around 125000 kilos of rice and 29000 kilos of dal. We also received around 5000 kg of rice from the state government at a subsidised rate of Rs 3. With all the support, we could start the distribution process right away,” he shares.

The ration kits being distributed at present consists of around 5 kg of rice, 1 kg of dal, 500 gms of besan (gram flour), 1 litre of cooking oil and soap. In some regions, milk is also provided, especially for families with children.

Each kit costs around Rs 491 on average and lasts around a week for a family.

Besides the dry ration, Kumar has also onboarded 104 NGOs including the Akshay Patra Foundation, who are providing 8000 packets of cooked meals daily to the most vulnerable section of the population. 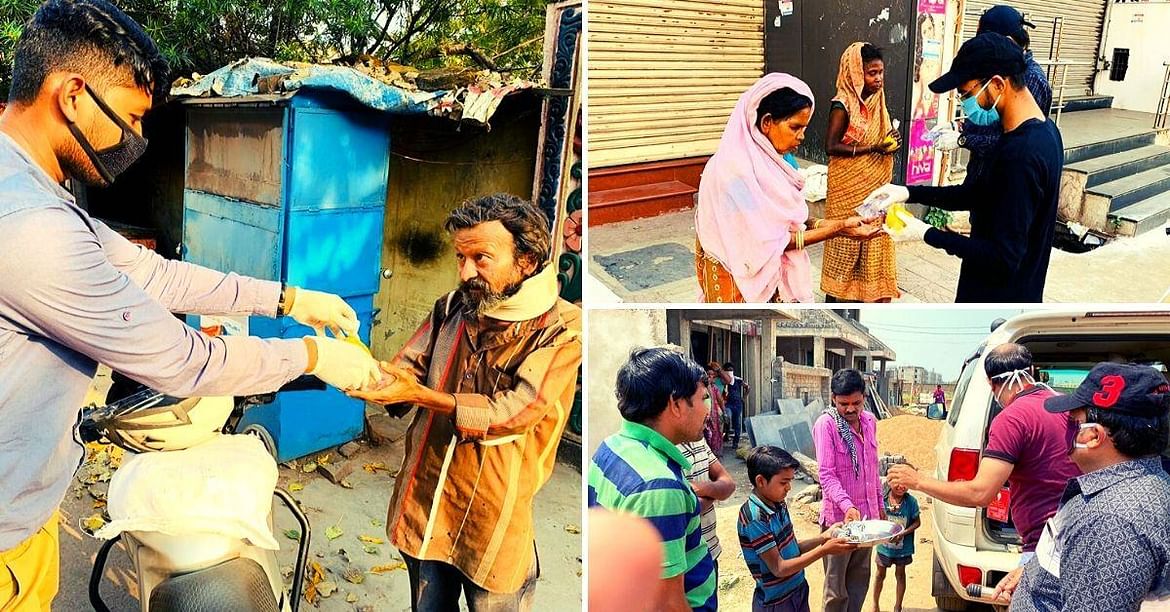 The door-to-door distribution of the ration kits is monitored by municipal authorities everyday post 5 PM.

Presently, in coordination with Akshay Patra Foundation, he wishes to raise around Rs 15 lakh more, so that he can procure rations to last till the end of the lockdown. The aim is to help families living within Municipal Corporation limit and left-out of the food security net; these families are majorly migrant labourers, daily wagers and families without any steady source of income, belonging to surrounding districts/states. These families either don’t have a ration card or have a ration card from surrounding districts/states and are not able to avail services due to lockdown. An exhaustive survey has been conducted and over 17,000 such families have been identified. Those are the families that will be supported with this campaign. 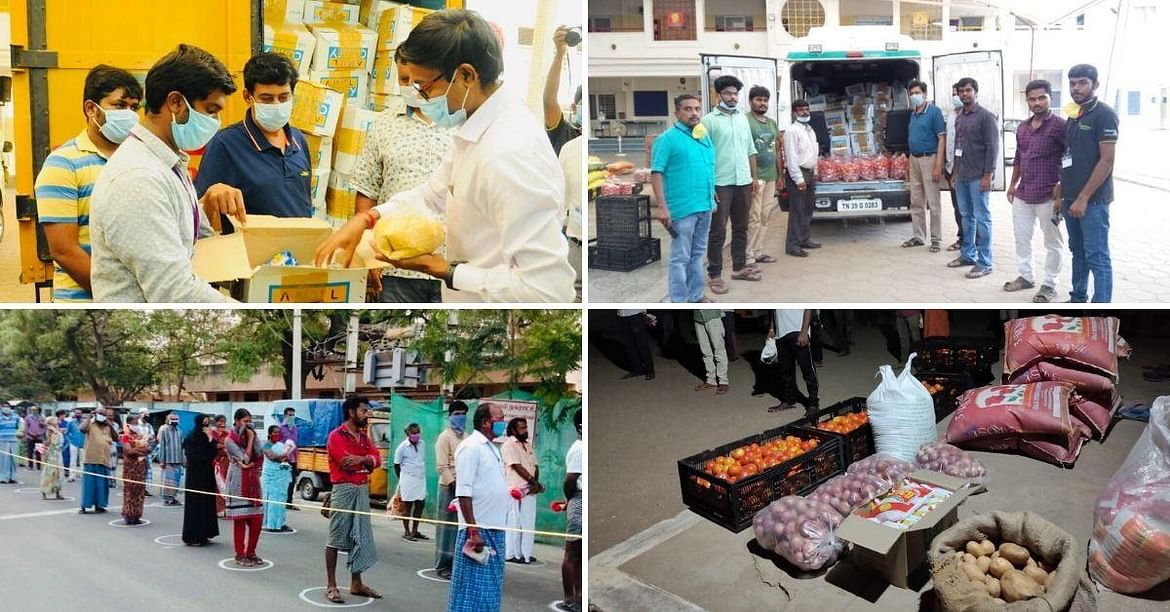 Famous as the textile hub of Tamil Nadu, Tiruppur district houses many migrant labourers from Bihar, Odisha, Uttar Pradesh, West Bengal and Assam. Once the nationwide lockdown came into effect, around three lakh workers got stranded in Tiruppur with no ways to earn and nowhere to go. For some fortunate ones, the basic needs are being addressed by their respective employers, but for the other families, there are hardly any means of sustenance. The plight is worst for around 40,000 piecemeal workers, many of whom do not even have a proper roof over their heads.

District Collector Dr K Vijaykarthikeyan has stepped in to tackle the situation by arranging food provisions for around 62,744 people so far. The district, which has already reported 20 cases of Coronavirus, has been placed under extra alert, thereby ensuring a foolproof lockdown. The doctor-turned-IAS officer is thus working on a war footing with all mandatory precautions to supply dry ration to the distressed families.

"We have set up a 24x7 control room with a team of officials and volunteers who are identifying the needy and making sure that the rations reach them in time. Around 1000 on-ground volunteers have been selected from among the citizens through our 'Tiruppur Corona Fighters' programme. They are working in close coordination with our administrative officials to facilitate the entire process. We have been operational since the very day of the lockdown," shares Dr Vijaykarthikeyan.

Each ration kit is priced at Rs. 755 and lasts for about a week in an average household.  So far, the funds for the rations have been provided through the state government's relief grant as well as CSR involvements. But, Dr Vijaykarthikeyan is raising Rs. 10 lakh to procure around 1325 more kits.