Akhila's online fundraiser for Social Entrepreneurship | Milaap
This campaign has stopped and can no longer accept donations.
I am fundraising to create an open platform to help rural youth explore & utilise their potential

The idea is about creation of an open space/platform for youth in a rural setup where they can come together to learn and grow through mutual collaborations. An open space to share their inhibitions, accomplishments and further contribute to it. This will be owned by youth and will be designed and modified time to time by them as per the needs of that particular context. This platform can be seen as space for youth to develop themselves, later the village and eventually the larger context. 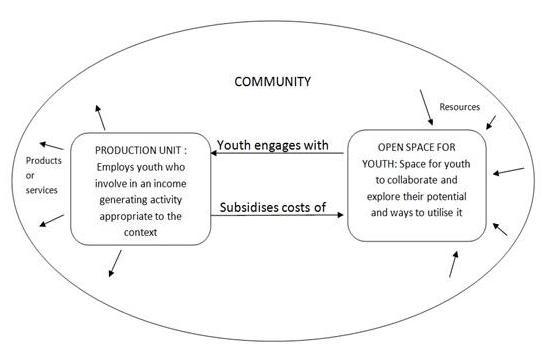 This space can also be  used to engage the youth in any income generating or manufacturing activity which helps them stay together for longer duration and also generate an additional income. This activity is both to engage youth and community at large with the space created to gain acceptance for the space so as to sustain it in the long run. The income generating activity can be around any of the following themes for products or enterprises.

The pilot for the venture has begun in early march and it will be conducted in 3 villages simultaneously to get a wholesome perspective on the workable venture model. In association with one of the villages, it has been realised that there is huge gap in the access to material required to prepare for competitive exams and also a repetition of aspirations in a group due to lack of awareness of the vast options. As steps to help with these issues at hand acquisition of latest edition material and conduction of regular workshops on career guidance, personality development, quantitative aptitude, mental ability, psychology , communicative English and discussions on exploring resources available in and around them have been planned.

I am raising fund to make this successful during this pilot in three villages in Adilabad District in Tamsi, Talamadugu and Adilabad mandals.

Why would rural youth engage with this platform?

This platform is one of the only spaces where they are heard to rather than being told to do something. It would surely take time for this to happen but eventually youth will recognise the importance of this space and engage with it.

What is in it for rural youth?

This platform will help resolve the issues of  lack of access to information, lack of awareness on opportunities, lack of skills or training for the same, whichever based on discussions with youth. It is a space they come to discuss and resolve their problems.

I am Akhila Debbadi, graduated from Birla Institute of Technology and Science with an integrated degree in M.Sc. Physics and B.E Electronics and Instrumentation; worked as intern at BasicNeeds UK (an NGO working on mental health) and SE Microelectronics; worked for 11 months as Senior Technical Associate at Bank of America and now a post-graduate student in M.A. Social Entrepreneurship at Tata Institute of Social Sciences. My inspiration all through to have a career in social sector has been my father who adopted his native village and has been developing it for past 15 years. I have been associated with an NPO Nirmaan during my graduation and worked in villages around Pilani who have also extended help during my pilot.