This Farmer Mother In Severe Debt Has One Last Chance To Save Her Son | Milaap
This is a supporting campaign. Contributions made to this campaign will go towards the main campaign.
This campaign has stopped and can no longer accept donations. 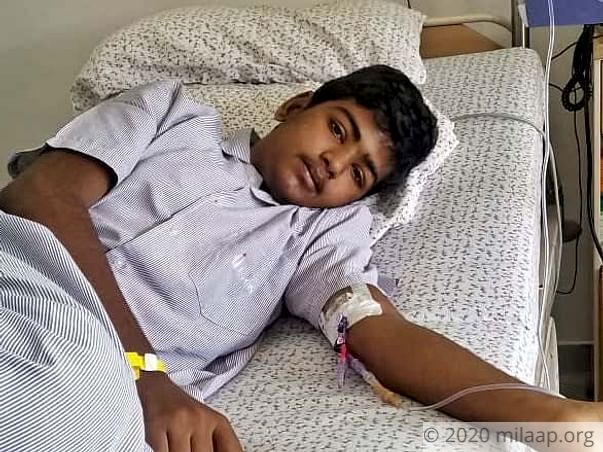 “My son has only known pain all his life because of cancer. He has spent his entire life shuffling between hospital and home, getting blood tests, and enduring chemotherapy. Somewhere between all this, he lost his childhood. As he grew up, he started going to the hospital on his own to collect his test reports. Last month I saw him sitting on the floor, with his new reports spread out. “It’s back, amma. Will this ever end?” he asked, not looking at me in the eye. We sat in silence the whole night. My husband and I did everything we could to get him treated. Now we have absolutely nothing left with us. We’re penniless and have no one to turn to for help.” – Komala, 17-year-old Nithin’s mother

Nithin braved the worst of this grave disease, hoping it would be the last of his suffering

Nithin had no choice but to grow up much ahead of his age because of the disease that has consumed his life – cancer. While his mother, Komala, accompanies him to all his tests and treatment, Nithin often makes his way to the hospital alone to collect his reports. He has braved the worst of blood cancer. The extreme fatigue and weakness that had left him bedridden for over 6 months, the constant pain in his body, the vomiting and worst of all, the feeling of hopelessness. Nithin had overcome it all in 2016.


“After his treatment was complete, he started going to school again. His hair started growing, he was gaining weight, and the life that was once drained out of him was returning to his face. We thought the worst was behind us. We had thought this the first time when Nithin had a cancerous tumour in his kidney when he was 3, and we were wrong. But this time, we thought that it wasn’t possible that God would put one child through so much. It had to be the end of his fight.” – Komala, mother

Nithin loves playing cricket with his friends. The first thing he did after regaining his strength was go watch his friends play until he himself felt strong enough. He soon started playing sports, going to school and was even hoping to pass his class 10 board exams next year. But just after 6 months after attending classes, Komala and Nagaraj found out that Nithin’s blood cancer had relapsed. They found out last month and were shattered beyond words. The burden that had once lifted from their shoulders had returned, heavier than ever. This was his last chance to fight cancer – but now he needs chemotherapy followed by a bone marrow transplant, the cost of which his parents can’t afford by any means.

Over the past 14 years, his farmer parents have spent a considerable amount on his treatment – now they’re in severe debt

After years of medical expenses, Komala and Nagaraj are buried in debt. They don’t have much to call their own. They have toiled day and night to save their son, Nithin, from cancer. But this time, they can’t do it alone. Nithin needs a bone marrow transplant at the earliest to survive. Your support can save this young boy and give him a new lease of life where he’s free of the pain of cancer.
Estimation letter 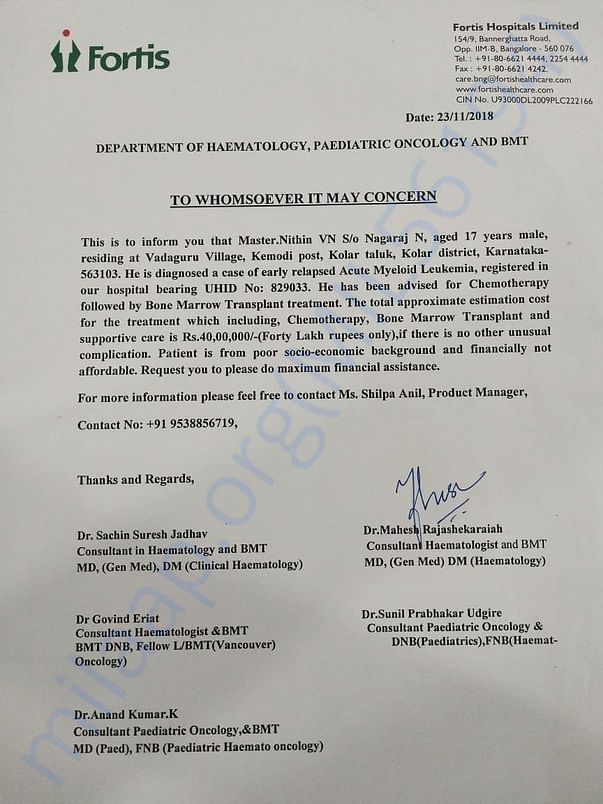 Report fundraiser
See how thousands are crowdfunding for their causes on Milaap
Content Disclaimer: The facts and opinions, expressed in this fundraiser page are those of the campaign organiser or users, and not Milaap.
Rs.700 raised 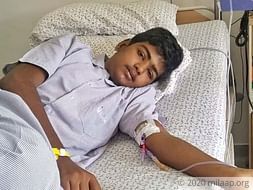