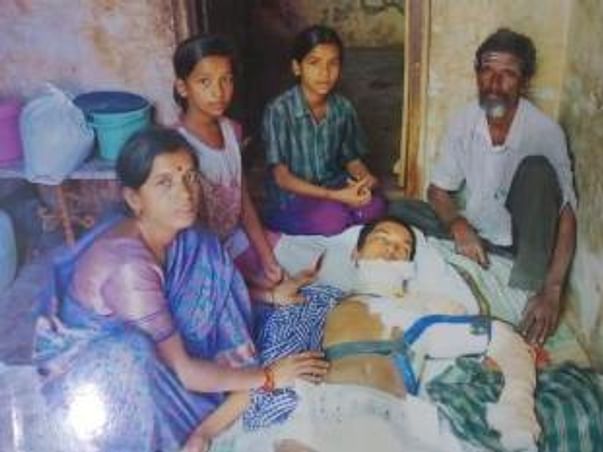 Share
Harikrishna was an ambitious student who aimed to become a scientist, and was preparing well to score the highest marks in 10th boards when tragedy struck. On that fateful day, he had gone to school to attend early classes when he accidentally slipped and fell from the fourth floor of the school building. As he was falling, the entire left side of his body pounded against the corridor walls of every floor and his head smacked hard on the compound wall of the school. He fell backwards on the hard ground and his left hand was dismantled.

"I had already left for my morning duty to clean the temple when I received a call from the school authorities saying that my son had an accident and I was shocked. I called my husband and alerted him. As I made way through the huge crowd that had gathered in the premises, I saw my son lying unconscious in the pool of blood, with my husband holding his dismantled arm. I was crying and calling out his name and trying to wake him up but he wouldn't." - Maheshwari, Harikrishna's mother.

When this incident took place a few years ago, Harikrishna was taken to a private hospital in Tirupati and was admitted to the ICU. His hand was stitched back to his body and he underwent many blood transfusions. But the hospital suggested the family rush to Chennai to save his life. Munniswami and Maheshwari sold their only house and quickly took him to a private hospital in Chennai. He was diagnosed with multiple fractures and severe head injuries. He underwent six surgeries and regained his consciousness after 10 days. But sadly, the couple exhausted all their money in three months, and couldn't afford further treatment.


"We had no place to call home when my son was discharged. With God's grace, a kind man offered us a tiny house to stay. After 9 days, my son slipped into a coma. With a poverty-stricken life, we couldn't afford the treatment and our twin daughters who were 11-years-old took care of him by dropping out of school. While my daughters fed him milk and juice through a tube, I worked hard to feed the family. My husband used to go around the district to find if anyone could help us with the money. We spent a year and a half like this with only one hope, to bring him back to consciousness."- Maheshwari.

Without urgent surgeries, Harikrishna will be bedridden for life

With the help of crowdfunding and state relief funds, Harikrishna was able to undergo a couple of more surgeries on his left hand and leg last year and was able to regain his consciousness. But he is not out of danger yet. The constant delay in the treatment had only made his condition more vulnerable. He is suffering from post-traumatic brachial plexus palsy on his left hand, where a network of nerve fibers that run from the spine are damaged and the signals cannot travel from the brain to the arm muscles. He urgently needs free functional muscle and tendon transfer, hand surgeries that will restore muscle and hand function. Without this, he will never be able to live a normal life.


"My son is bedridden from the past three years. He started talking a few months ago. He manages to stay positive and views this incident as a challenge. He even started studying daily with the hope to recover soon and write his board exams. There isn't a day goes where he doesn't talk about his dreams to us. We were told that this is his last chance to have a normal life but poverty stands as the biggest hurdle."- Maheshwari.

Desperate parents have nothing left to save their son

Maheshwari is a sweeper at Tirupathi temple who earns Rs 6000 a month and Munniswamy is a server at a catering company who earns Rs 250 a day. Despite their difficulty to feed their three children they never compromised to try and provide them proper education. The cruel incident had affected the family so much that they are unable to afford two meals a day now. They have spent nearly 25 lakhs until now and cannot afford the surgeries that cost 6 lakhs. Without this treatment, Harikrishna will be bedridden for his entire life.

Harikrishna, an ambitious 19-year-old teenager, not only always topped in his class but also had a very curious mind to experiment with everything that he comes across. He aimed to become a scientist. But a fatal accident had shattered all his dreams when he fell from the 4th floor of his school building. He urgently needs to undergo surgeries to restore muscle and hand function without which he will never be able to achieve his dreams. His poor mother who is a sweeper in the Tirupati temple, and his father, a server in a catering company cannot afford the treatment.