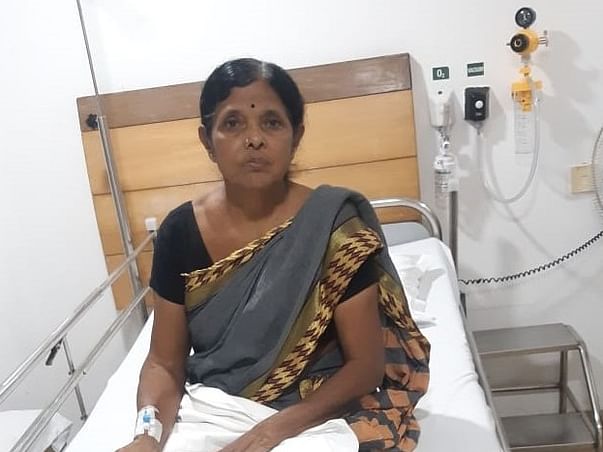 Share
Hi friends,I am Namburi Jayaprakash  from Anathapur district. My mother N.Rangamma is diagnosed with aplastic anemia. In march 2016 she was suffering with fever for more than a month and we admitted her at Hyderabad Apollo Hospitals, Jubille Hills. She was in hospital for more than two weeks but doctor could not identify the actual cause for the fever. Later doctors did PET CT scan and found that in her right thigh she had a blood clot and her CBC levels showed that she is anemic. Also the doctor did vitamin B12 test and found that she had vitamin B12 deficiency.

After treating for two more weeks she couldn't recover so doctor suggested for bone marrow and found that she was diagnosed to macrocytic normochromic anemia with thrombocytopenia. Doctors suggested that she can recover by giving her healthy diet as her cellularity level is not normal. We took care as per doctors advise and she recovered well. Every year we took her for  general check up and all her count in CBC was at normal level but her cellularity level was low when compared to other healthy persons.

In  october 2020, my mother complained that  she is feeling weak and when she walk a little distance she was feeling tired and dizziness. We took her to apollo to the same doctor and doctor prescribed to take few tests and found abnormal blood levels in CBC and her vitamin B12 levels were low. She was treated for vitamin B12 and then suggested for blood transfusions and platelets tranfusion. Inspite of regular  transfusions her platelets were going down so doctors suggested for Bone marrow transplant. While undergoing bone marrow it showed that marrow was empty and suggested for costly medications (tablets revolade 50mg) twice daily which cost 30k for a week. While continuing these medications doctors suggested for CBC every alternate day to check whether her platelets are normal. But still her platelets are going down day by day inspite of using that  costly medication.

After waiting for more than a month doctors advised us to repeat Bone marrow to check if any abnormalities. Later doctors found that she is suffering with Aplastic anemia with less than 10% of cellularity in her marrow with blood smear as hypo cellular. Doctors suggested for AGT and then Bone marrow transplant procedure which will cost around 25 to 30 lakhs. Already we spent around 15 lakhs and doctors advised it will cost another 25 to 30 lakhs for her further treatment.

Please do not hesitate to reach out to me, if you need any more details