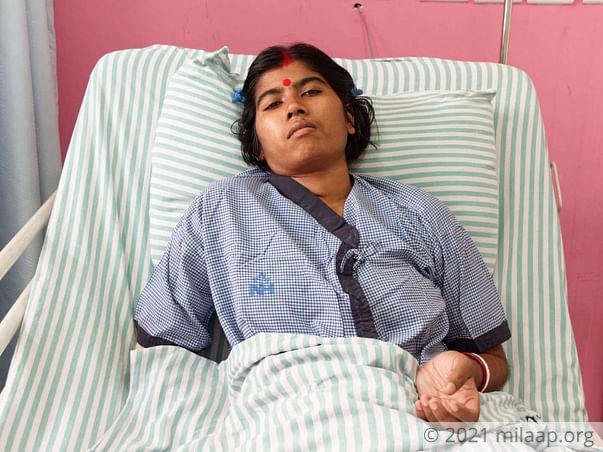 “My wife, Debashree hasn’t seen our 3-year-old daughter, Dipika, for the past 3 months. My daughter calls and tries to speak to her mother, but her mother speaks so feebly that it is hard to hear. Dipika tries to ask a lot of questions, but Debashree can hardly answer back. If she tries to talk properly, she has such a terrible headache and begins to cry. Just a few months back, Debashree was so vivacious and healthy, and would manage all the household activities single-handedly. But now, a deadly tumor doesn't even let her walk to the bathroom by herself. It breaks my heart to see her suffer so much.” - Dilip, 25-year-old Debashree’s husband.

Despite undergoing a surgery, Debashree's tumor still puts her life in danger

Debashree would often complain of a headache. She would pop a painkiller and would be fine for a few days. But when a few months later, the frequency of her headache grew, Dilip admitted her to a local hospital. After a CT scan, the doctors found out that Debashree has pineoblastoma, a form of a cancerous tumor which is present between the brain and spine. The tumor is located in such a critical position that it was life-threatening for her. She had to undergo urgent surgery. Now she needs to undergo radiation to remove the tumor completely.


“My wife couldn’t walk, talk or eat at all. But the surgery and a few cycles of radiation, gave me hope. Initially, I thought that my wife will probably never move again. But with the treatment, she has at least started talking and can move with help. I will have to continue with her treatment at any cost and save her.”

Dilip had to rent a house near the hospital because Debashree has to take radiation every day and she is not in a position to travel. Little Dipika has stayed with her grandparents in their village for the past 3 months. Debashree longs to go back to her daughter. But her painful and deadly tumor has forced her to stay away for months. As she looks at her daughter's photos on her husband's phone, tears roll down her eyes. She often tells her husband to take care of their daughter when she's gone. The only wish that Dilip makes every day is that their daughter doesn't lose her mother at such a young age.

With all his savings gone and no one to help, Dilip doesn't know how to save his wife

Dilip worked as a mason in Basudebpur, West Bengal and barely managed to earn Rs 300 per day, but the couple's love for each other withstood all hardship.  Even with their meager family income, they were happy. But when Debashree fell sick, Dilip realized his poverty could take his wife away.

“I have spent Rs 4 lakhs to save Debashree so far. I had to borrow from all the relatives. I never expected that life will bring me to a position where I will question myself if I can take care of my family. I had no savings and now even my relatives are no longer in a position to help us anymore. I can’t even go to work regularly because I have to be with my wife. I am neck-deep in debt and can no longer afford to spend Rs 1 lakh for my wife’s radiation therapy. I am scared that if I fail to arrange this money, I will lose Debashree.”

This young mother has a deadly tumor between her brain and spinal. She hasn’t seen her daughter for the past 3 months. Despite undergoing a surgery, she is still in danger. If she doesn’t get the radiation now, the tumor will kill her. Her husband is neck-deep in debt and still can’t afford to save her.

Donate
0%
Be the first one to donate
Need Rs.100,000
Card, Netbanking, Cheque pickups
Or Donate using