Farmer Struggles To Save Son From Cancerous Tumour On No Income | Milaap
This is a supporting campaign. Contributions made to this campaign will go towards the main campaign.

Farmer Struggles To Save Son From Cancerous Tumour On No Income 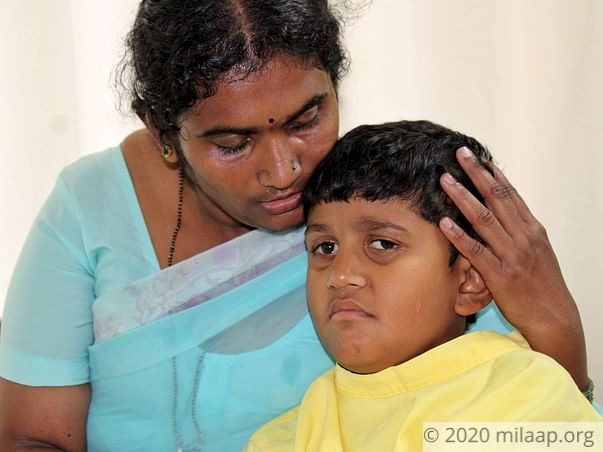 Nataraj has spent the past year toiling away on the fields in the blistering heat of his village near Mandya, Karnataka. However, no matter what he tried, his crops failed to thrive. The weather and his circumstances were not in his favor. Where once his son would run around the green fields every time it rained, now lies a dry patch of land. Nataraj dreaded going back home with a few ten rupees at hand or sometimes, nothing. He knew the year would be tough for his family, but what he wasn’t prepared for was to find out that his son, Monish’s (8) cancerous tumor would be back, more dangerous than ever.

Little Monish has Medulloblastoma, a cancerous tumour that starts in the brain. The tumor has now spread to his spinal cord and he needs chemotherapy and a stem cell transplant to fight it for good.

There was no stopping Monish, until cancer crept into his life

Monish was always an active boy. Whether it was his endless tales of the ‘little prince’ who slew a big, bad monster, or him cycling around the neighborhood with his friends, there was no stopping him. Shruti and Nataraj were always on their toes with him in the house. However, two years ago he was diagnosed with a cancerous tumor in his brain after there was swelling in his left eye.

“I was dropping him to school on my bike one day, and when he was climbing off, he fell and said his head was spinning,” says Nataraj recalling the beginning of the darkest days of their lives. “He underwent surgery and thought it was the end of his fight. But now he can’t see from his left eye. I’m scared to think of what might happen if we can’t continue treatment.”

His mother can't be with him in the hospital, his father hasn't been able to go to work

Now that Monish is in a hospital in Bangalore, Nataraj hasn’t been able to work. Shruti is back in their hometown with their 9-month-old baby girl and calls him every day to find out if they've found a way to afford the treatment. Nataraj often doesn’t know what to say to her. Unfortunately, the lakhs needed for Monish’s treatment is a hurdle Nataraj and Shruti just can’t overcome on their own.

“When she came to Bangalore for a few days to be with Monish, she was so overwhelmed that she cried the whole time. I don’t want to let my family down. I wish there was some way I could make it all okay.”

With timely treatment, Monish can beat the cancerous tumor for good

When Nataraj gently explained to Monish that he would have to stay in the hospital for longer, he nodded and asked if he could call his teachers and tell them. “I’m not feeling well, miss. I will have to stay in the hospital for a little longer,” he said. Nataraj couldn’t help but break down. Monish, however, can beat the tumor with timely treatment. He needs chemotherapy followed by a stem cell transplant at the earliest and we can help him get it in time. 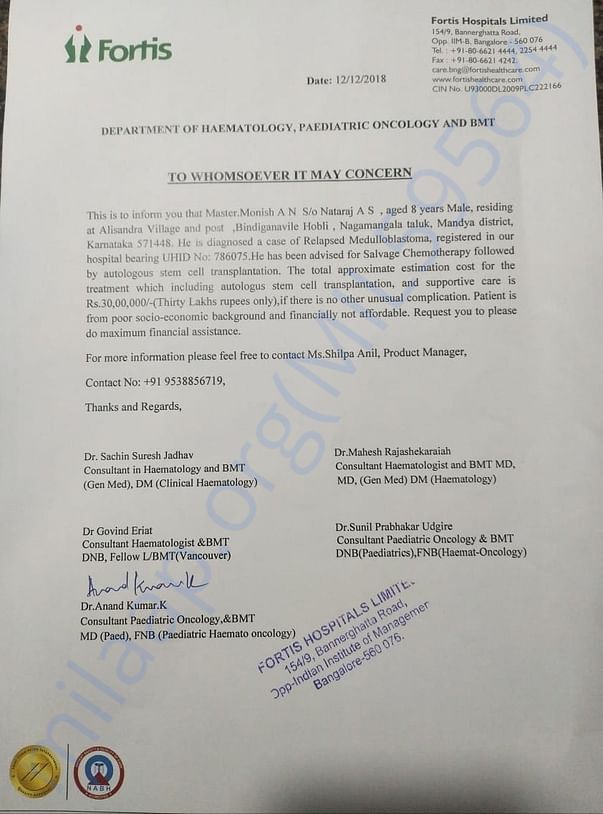 Here is an quick update on Monish. Monish is undergoing his Chemotherapy Sessions and was admitted for Bone Marrow Biopsy. Post this, his date for transplant will be decided. Will shall keep you posted.

Thank you all for your immense support showered on Monish.

I once again thank you all for your kindness in supporting my son. Please continue to share the campaign more and help us reach the goal amount. 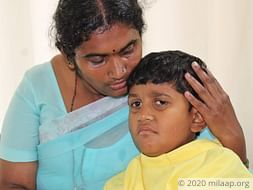 Farmer Struggles To Save Son From Cancerous Tumour On No Income