Minnie and Macho: A Happy Story! | Milaap
Milaap will not charge any fee on your donation to this campaign.

Minnie and Macho: A Happy Story! 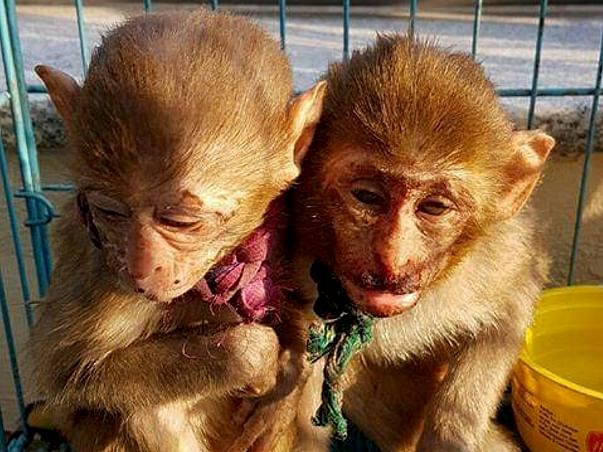 PFA Hyderabad is a voluntary, non-profit organization that provides free treatment to sick and injured animals and tackles cases of cruelty inflicted upon them.
Narrated below is just one of our happy rescue stories. With your support, we can accomplish a lot more for the voiceless.
Minnie and Macho, of ages 1 month and 2 months, respectively, were rescued from a madaari on 09 February 2017. The monkeys were found injured and terribly scared of humans, and were trembling upon a simple gesture of touch.

Upon investigation, it was found that they were snatched away from their mother by a madaari and she was killed right in front of their eyes. They were also horribly abused by the man and had scars and burn injuries on their mouth and tails.
When we rescued them, they clung on to the rescuers and wouldn’t let go, probably sensing that they were finally safe. But they were still under trauma and needed lots of love and attention. We got them treated and placed them under the care of our valued foster carers.
Under foster care, Minnie would happily play and explore the place while Macho, the elder one, would still remain aloof and scared, owing to the horrendous abuse that they had been through. After 2 months of receiving nutritious food, medication and rehabilitation, they were finally ready to be released.
After thorough investigation of potential places for safe release, we decided upon Kulanpak jain temple at Yadadri district, Telangana, where there was a troop of monkeys present, and the availability of food and water was ensured. We were hoping that a female monkey from the troop would ‘adopt’ these two.
On the 7th of April, we took them to Kulanpak jain temple, and slowly led them out of their cages. They were very happy to be in their natural habitat started exploring the place. They swung on the trees and jumped around, but were hesitant to go near the other monkeys.
Around the time of the sunset, a female monkey from the troop approached them gently, and Macho jumped into her lap! We were pleasantly surprised at the incident, and were elated that what we were hoping for had been accomplished.
This is a very happy rescue story, and we are pleased that the babies are now leading a happy and fearless life in their natural habitat, under the care of a foster mother who took them under her wing with love.
If you like what we're doing, please help us continue our service to the voiceless by making a donation. Any contribution, big or small, would help us take up more rescues, more cruelty cases, which would make a huge difference to the lives of numerous animals, and ease their suffering.
Finally free! 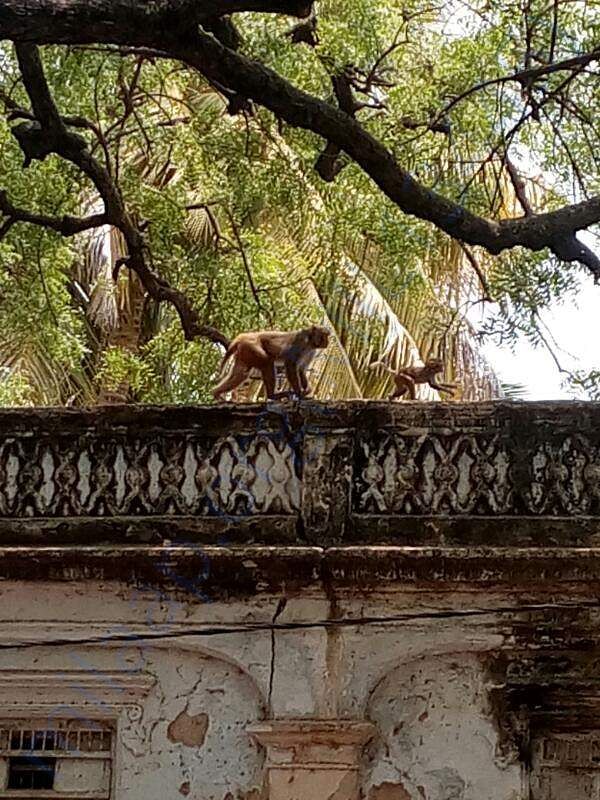 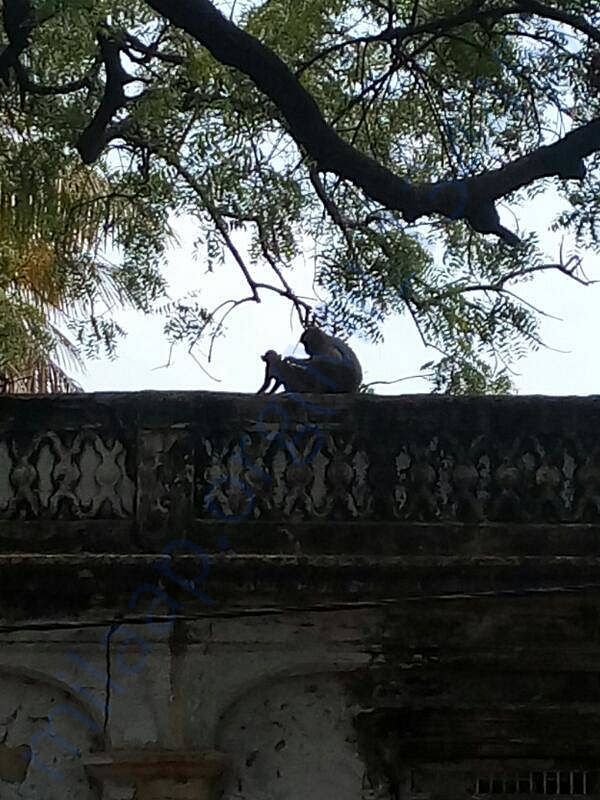 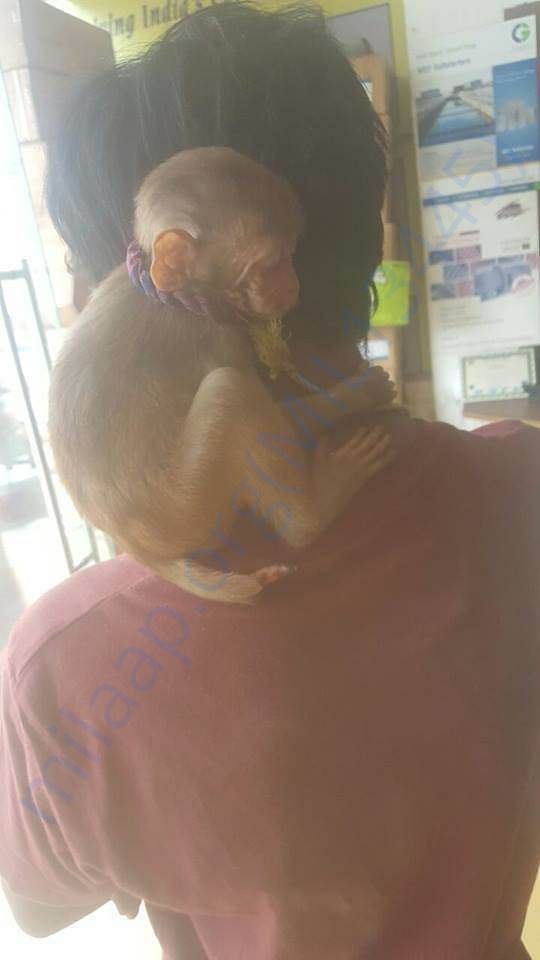 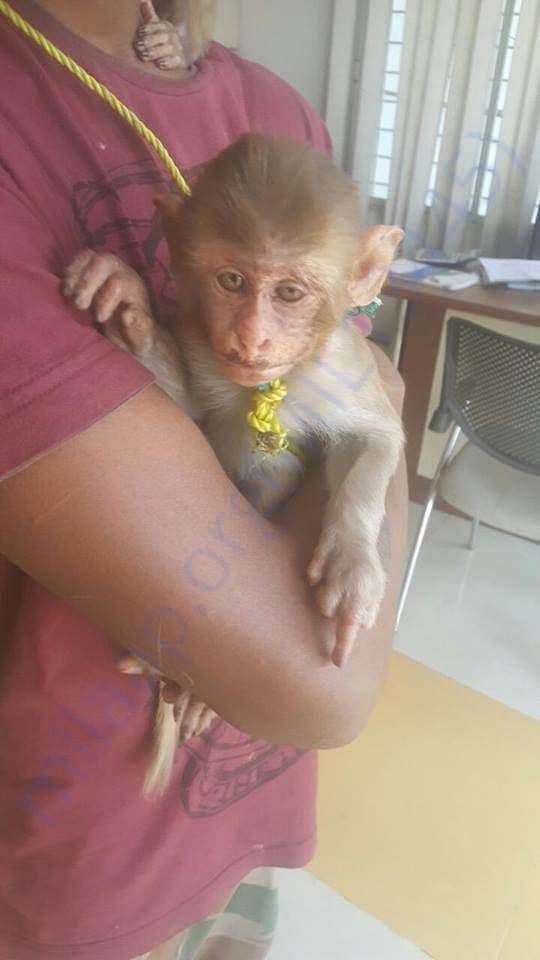 Minnie and Macho when rescued 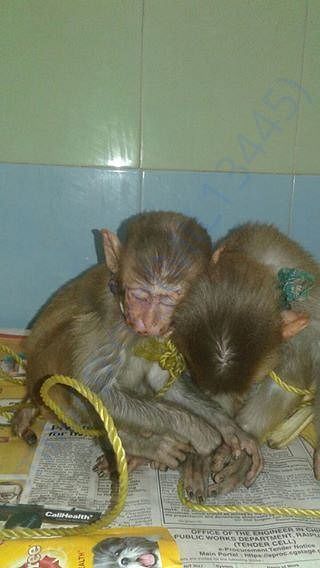 Minnie and Macho have been released successfully and have found a family in the wild. They're now leading a happy life.

If you like the work that we're doing for the voiceless, please donate towards the cause!
Load more
Donate 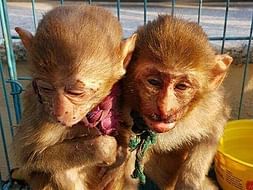 Minnie and Macho: A Happy Story!