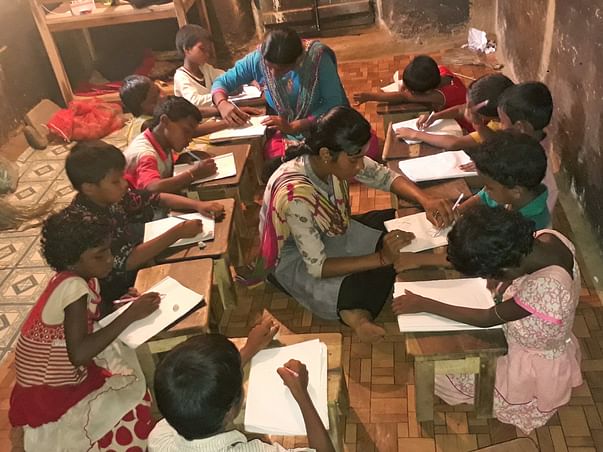 Subject: Prayer for raising your hand for Indigenous children.

I  would like to request you to allot a few minutes from your valuable and busy schedule to visualise a new vision through our prayer about a Govt. Registered Trust named MIND FORMATION, a non-profit organization, working for educational and socio-economical development of indigenous people (Saontal) of village- Marchi, Block- Garhbeta- 3, Dist- West Midnapur, West Bengal, India. Mission of this trust is to ameliorate the downward movement of this inhabitants of the said village. Our survey and research find out  the truth that the only way to stop their downward movement is to provide them education first.  Educating them mean not to acquire only academic certificate with brilliant number but also changing their vision through acquiring epistemology.  Regarding the activity of this trust, a project report of the school MONER UNMESH is being enveloped with this letter. Hope if once you move through this report it will touch deep in your benevolent heart.  Our earnest request to you to consider it with humanity and raise hand to success the mission.

Thanking you,
Yours faithfully

How the fund will be utilized:

The members of the trust Mind Formation are solely engaged and not only benefited by no means but bear a large part of expenditure. Though some well-wishers are carrying a small part of responsibility in recurring basis and without the help of a few donors it would be too difficult to move on the path of future. Whole responsibility of these children i.e. food, dresses, medicines, books, copies, and stationary goods, and salary of teachers, cook, electricity bill and expenditure of building the school building are being carried by the trusty members and few donors. By no means a little penny is being collected from guardian of student. It is against the charter of The Trust.

The economic condition of these inhabitants belongs to under so below poverty level that they hardly satisfy themselves with their food, even someday they can’t fulfill their basic need too. Realizing this situation we can't demand anything from them in return to provide them the basic requirements. The fact is seen yet that, capturing over fulfilling own requirement is known as self-protection in the name of "development", which is totally driven by the Capitalism which does not seem to provide any development in rural areas. So our pray to those people, who are earning much greater than their need are requested to donate for these needy people.


Why an alternative education?

“Impressions do not merely enter a child’s mind; they form it.”
— Maria Montessori

She explains that there is a sort of mental chemistry as the child builds himself through experiences. The way we raise and educate our children is a reflection of how we want to live our lives. Child-rearing and education are reflections of our values.

Emphasis and importance of education is indubitable but public school system has been criticized over years. Many critics of the public school system referred to Jean-Jacques Rousseau’s Émile, published in 1762, in which he argued that education should follow the child’s innate growth rather than the demands of society. Historically, alternative models of education have coexisted with the public education system ever since its inception in the first half of the 19th century (Raywid, 1999). Attempts by the state to provide a common, culturally unifying education for all children have provoked the response of educators, parents and students who have declined to participate in these systems. Their reasons are manifold, and the forms of schooling (and non-schooling) they designed are equally diverse. “The history of alternative education is a colourful story of social reformers and individualists, religious believers and romantics” (Miller, 2007).

The term “alternative education” describes different approaches to teaching and learning other than state-provided mainstream education, usually in the form of public or private schools with a special, often innovative curriculum and a flexible programme of study which is based to a large extent on the individual student’s interests and needs (Raywid, 1988; Koetzsch, 1997; Aron, 2003; Carnie 2003).

The alternative system of teaching is not entirely new in India; the Vedic and Gurukul systems of educations were based on the principle of acquisition of occupational skills, cultural and spiritual enlightenment in an atmosphere that encouraged rational thinking and reasoning among the students. However, the colonial era saw the focus being shifted to only English as the language of instruction and following a common curriculum across schools. In the early twentieth century, people like Rabindranath Tagore, Jiddu Krishnamurti, Sri Aurobindo, Maria Montessori and Walden started models of alternative schools as a response to the drawbacks of mainstream education system.

The biggest deficiency with our school education system is its one-size-fits-all approach. Classroom instruction is designed to cover a prescribed syllabus in a single-track mode to all students in a class, overlooking the wide variations in learning levels among students. This is most likely to leave stranded those already lagging on learning levels— which unfortunately forms the vast majority of students in each class. With each passing year, as the learning gap widens, these students become passive and disinterested spectators in class and finally drop out.


Education System and the appeared Gaps in our country:

Many education initiatives have been implemented by Government, NGOs and business houses throughout India since Independence. It has had its impact and school enrollment has increased above 90%. Yet, many would agree that the country is far from achieving universal primary education- a scenario where all children go to school regularly and learn sufficiently. It is not about numbers of school enrolled but students learning achievement.

Modern education system teaches with the purpose to score high grades, but does not provide the in-depth knowledge on the subject or its application in daily life. To give an example when asked to teachers of secondary standard on the difference between addition, subtraction, multiplication and division, why the LCM is done with the denominator of dividend, why we multiply length and breadth to find area and not sum up to find the area. Do we know when to apply which alphabet in spelling? A child, clear with all these aspects will find subjects interesting and have a stronger base for higher education.

Paschim Medinipur district represents regional diversity in terms of physiographic, agro-climatic characteristics, economic development, social composition etc. Geo-morphologically, the district can be sub-divided into three parts, Chhotonagpur flanks with hills, mounds and rolling lands in the westernmost part, Rahr Plain with lateritic uplands in the middle part and Alluvial plain of the east with recent deposits. It has drought-affected dry areas in the west but highly wet flood-affected in the east. Dense dry deciduous forest in the west is replaced by semi-aquatic vegetations of marsh lands in the east. It is the abode of tribes and primitive tribes in the western blocks while most of the other areas are inhabited by all castes.

Garbeta III block situated in the Northern part of the district is semi-arid, drought prone zone with low vegetation and 1/3rd of the population living below Poverty Line (2007). Garhbeta III Block covering an area of 312.12 km has 8 Gram Panchayats. As per the 2011 Census of India, Garhbeta III Block has a total population of 169,528, with sex ratio of 971. The block has a strong presence of scheduled Castes (15.34%) and Scheduled Tribes (14.13%). Literacy rate (for population over 6 years) is good at 72.21% of the population but with a gender gap of 13.18%. Total block has only 122 primary schools, 15 middle schools and 10 high schools and 8 higher secondary schools.

Marchi is a small Gram Panchayat in Garbeta III block with 84 houses and a total population of is 405 covering 49.29 hectares land. The village conceives totally indigenous (SAONTAL) population and low literacy rate and skill set, this Gram Panchayat is one of the poorest in the area. Water and Sanitation condition is poor, with only two houses having latrines. Households own land but couldn’t cultivate in last 4 years due to lack of irrigation facility and poverty. These families depend on wage labour of the women for family income, working in other’s land, household or working in hazardous condition in stone query, or collecting sal leaves from forests. Males are alcoholic and physically weak, and commonly suffering tuberculosis. Unaware of treatment mortality due to TB is prevalent in the area. Children grow up in such non-conducive socio-cultural context.

Parents and children don’t feel the need for education and school enrollment is low and drop-out high from primary school; children completing secondary education are rare from the villages. Early marriage is customary within both girls and boys. The village is in a vicious trap of poverty and only way to bring children out of this situation in mainstreaming them into education.

Children in the area need an education different from the contemporary that gives life-oriented education. Teachers of the school need to be from within the village, so that they can bring children to the school from their houses.

Strategy:
This project works individually with each child, to increase their concentration, mindfulness towards education through YOGA along with providing knowledge on the base knowledge of each subject. Children will be taught about life, life skills, will be motivated with the lives of legends and also not so successful person. Audio-video teaching aids will be used to create more interest. Teaching will take place in nature living in close vicinity of nature.


Teaching objective will focus on the following:

Drawing is the reflection of the mind of child. Due to the lack of ability to express own feelings by language, they try to reveal by drawing. The more expertness on this primary medium for expression, the more possibility to increase the concentration of children.

Before learning drawing, they are practicing to draw circles by hand.

Before learning English handwriting, children should practice some special drawings, so that, they can write English spontaneously.

before learning English handwriting, they are practicing pre-writing techniques

they are learning English alphabet

New generation is growing under the motherhood of the teachers...

From behalf of the school committee, a prayer for raising your hand for these children.

Food - Hygiene - Knowledge
The natural (God made) primary needs of life
should never be obstructed by
any artificial (man made) capitalistic condition.

Already we have built the basement (up to 18 inch above from ground level) and we have set the submersible pump, and also we had built the wall up to 6 feet (above from the basement) of our school building, which consume the followings:

the round basement of the school building and the submersible pump at the center [photo captured on Jan,'19]

the mud wall is being built [photo captured on March,'19]

But, the casualty due to the disaster, Fani the cyclone:

the 6 feet wall of the construction has broken down due to the storm Fani [photo captured on May, '19]

Donate
5 supporters
1%
Raised
Rs.4,110
of Rs.730,500
Only INR donations accepted towards this cause
Card, Netbanking, Cheque pickups
Or Donate using