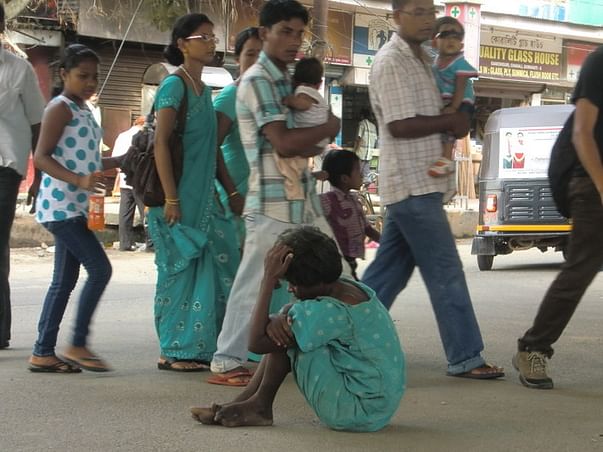 Help us to reunite a homeless woman with  mental illness back to her family with dignity….!!!
Homelessness amongst persons with mental illness is a common sight in developing societies like ours where psychiatrist/population ratio is one for every million and poverty looms large over majority of the overall population. Vulnerability within this populace is two-fold in case of homeless women with mental illness whose number have always  been increasing. In 2005, Ashadeep initiated project ‘Navachetana’ for rehabilitation of Homeless women with Mental Illness. The prime objective of this project – ‘Navachetana’ is to provide care, treatment and rehabilitation measures to these women and to eventually re-integrate them with their families. Psychiatric, and other medical treatment as may be necessary for admitted women and care; Psychological and other social rehabilitation services are provided at the ‘Navachetana’ residential facilities by a team of qualified personnel including psychiatrists, psychologists, counselors, social workers, and trained health care staff.
For the last 10 years, Ashadeep has been rescuing and providing rehabilitation services to an average of 65-70 such women each year. A total of 610 homeless women with mental illness have been provided intervention since Ashadeep started working with this marginalized group  and 565 of them have been reintegrated with their families spread across North Eastern states,Bihar, Uttar Pradesh, Madhya Pradesh, West Bengal, Andhra Pradesh, Karnataka, Gujarat, Rajasthan to Bangladesh and Nepal.
Ashadeep was initiated in the year 1996 , with the vision of achieving a life of better quality for persons with mental disorders and their families by initiating and strengthening mental health interventions in the Northeastern states of India. Ashadeep has always consistently strived to reach out to persons with mental disorder in all context and has been a major service provider in mental health interventions for one and all in the community.
Families are often at a loss of words when they are reunited with their loved ones whom they had lost due to the illness. Each family and each reintegration has a unique story to tell!
Our success story.......

Certain sights linger in our memories long after they have been witnessed. For many of us in Assam it was the graphic visual of that of a woman breast feeding a puppy which was unmindfully and repeatedly being telecasted on our TV screens. The woman on the screen seemed to be unperturbed by the swarm of people gathered around her. It was being reported that she had recently given birth to a girl child who was taken away by local people of the area where she had been wandering for many a months. A few days after this incident was captured by the media and the ensuing hue and cry on talk shows had subsided the woman was brought to Ashadeep by the Police (of Rowta Police Station).
At the time of admission she was displaying symptoms like self muttering, self smiling, uncooperative, and hallucinatory behavior. After she was bought to Navachetana, she was given the anti-rabies injection and attended by a Gynecologist as she was having post delivery related issues. She was diagnosed as having Schizophrenia by the Psychiatrist. Soon thereafter her treatment begun and she was provided with psychosocial inputs. She was called as Munni  by fellow residents and staff members.
After recovering substantially and spending nearly about 18 months at Ashadeep, Munni started recollecting names of few of the landmarks near her residence. Her home was traced to an interior village in Udalguri District (BTAD). On reaching her village it was found that that her mother had passed away a couple of months ago and she was survived by two elder brothers and a sister-in-law. She developed symptoms of mental illness when she was around 16 years old. She was under treatment and medication under the consultation of the LGBRIMH at Tezpur. During this period she eloped with a man from her village who had approached her family for her hand in marriage. Post marriage she discontinued her medication which led to a relapse of the illness. Few months later her brother found her sitting near the Tangla Market where he learnt that she was pregnant and has been wandering there on the streets. He brought her to home where she gave birth to a healthy boy child. Her husband contacted her family and took her back to his home along with the boy child. Her situation deteriorated in the absence of any treatment and few weeks later she wandered away from home and started living on the streets. It had been 8 years of wandering in the streets before she found her way to Navachetana and was able to regain her former healthy self. Presently she is leading a normal life with her brothers and continues to receive treatment at Ashadeep’s OPD every month.
Your Support Will……..
Ensure that these people do not remain edifices in the footpaths of the roads which you daily pass by. Otherwise neglected and looked at with disgust for no fault of their own, homeless persons with mental illness will get an opportunity to pursue a life of dignity and secure their basic rights of good health and well being. They will continue to receive interventions by a team of qualified personnel including psychiatrists, psychologists, counselors, social workers, and trained residential health care staff at Ashadeep. With the ultimate goal of reuniting them back to their family.
Therefore, the  break up of the required budget is given below:
Expenditure  for 50 inmates at Navachetna-Rehabilitation Home for Homeless Mentally Ill Women for one- year.
Salary for health support staff  for 5 workers @9000/- = 5,40,000
TOTAL AMOUNT                           18,60,000