2-Year-Old's Parents Can't Afford The Only Cure For His Rare Disease | Milaap
This is a supporting campaign. Contributions made to this campaign will go towards the main campaign.
This campaign has stopped and can no longer accept donations. 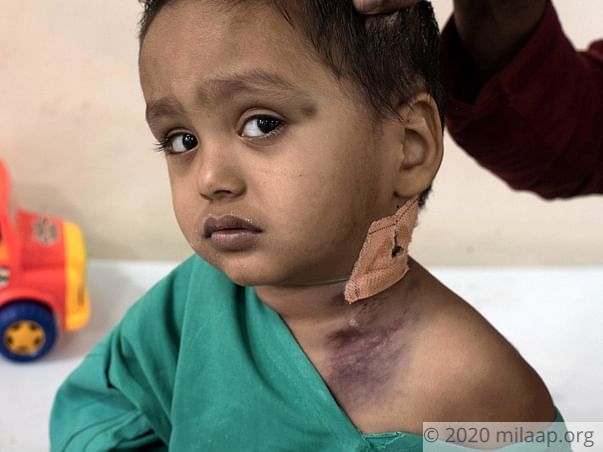 “Sometimes, when I look at Meet’s smiling face and his unstoppable energy, I tend to forget that he is fighting a rare disease. I forget that for the last five months, we have been struggling very hard to get him treated. My eyes tear up when I think that if I am unable to afford the money for his bone marrow transplant, I might never see that smiling little face again - might never get those warm, fuzzy hugs that used to cheer me up after a long day at work.” - Ashish, father of little Meet.

It all began when Meet got hurt while playing one day

2-year-old Meet has been diagnosed with Dyskeratosis congenita. It is a rare bone marrow failure disorder. This means that the soft area in the centre of most bones does not make enough blood cells. Patients with this disease may have low levels of platelets. As a result, it takes a lot of time for their blood to clot. A mischievous child, Meet got hurt while playing, a few months ago. Ashish and his wife, Riya thought that it was a normal bruise which would heal soon. But the bleeding didn’t stop from the wound and it was in Mumbai that they found about Meet’s disease.

“Meet keeps telling me that I know nothing about mobiles and that only he can fix the problems in the device. I smile and let him do all of that. Seeing his interest in fixing things, I have told him that he needs a transplant to fix his disease. He kept quiet for a while and then said, ‘Ok, done.’ His positive attitude is the only thing that keeps me going.”

Away from his known surroundings, Meet longs to go home

Despite his weakness, Meet has not lost his funny self. He makes silly faces in front of his parents and then rolls over on the bed laughing at his own jokes. He is friends with the doctors and nurses and can spend hours chatting with them about his favourite cartoons. But he misses home and his two sisters. Video-calling is no longer enough for little Meet who wants to go back to Akola and play with his teddy bears. He needs platelet transfusions every three days and the only way he can go home is after a bone marrow transplant.

An employee in a private company, Ashish’s income was just enough to run his family of five. But since the last five months, he hasn’t been able to go to work because of son’s condition. He has been running to and fro from Mumbai to Akola, arranging donors and getting medicines so that Meet gets well soon.

“I had to sell my scooter and also my wife’s jewellery. Only then was I able to spend about Rs 7 lakhs for the treatment. Now, I need Rs 10 lakhs more and there is no one to whom I can turn for help. The transplant is Meet’s only hope, but how do I arrange for so much money?”

Little Meet needs a bone marrow transplant to fight back his rare disease but his family is not in a position to afford it. Ashish fears that he will have to pay a heavy price if he is unable to arrange the money for his son’s life-saving transplant. Your generous contribution can save this little boy’s life and take away the worry from the minds of Ashish and Riya.

Your support can give this boy a second chance at life 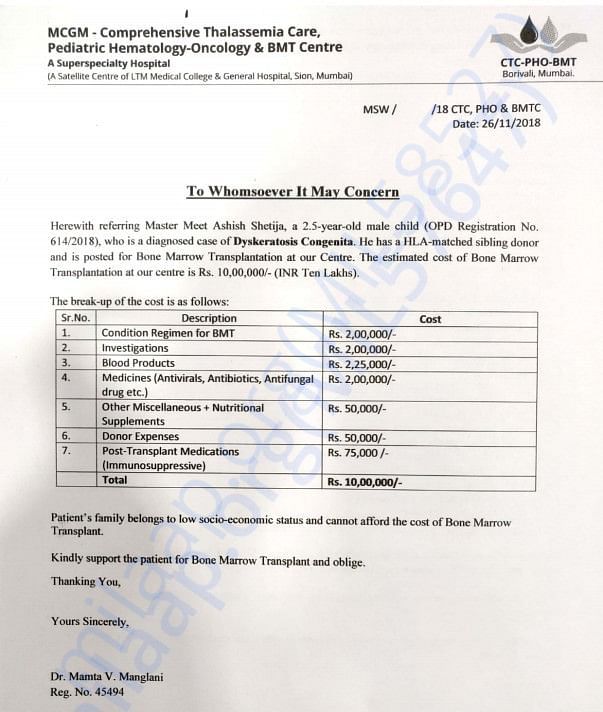 We have some unfortunate news to share with you all. After multiple days of struggle, Meet has now left us. He recently passed away due to severe complications and infections. We are praying for his family.
May he rest in peace.

Meet Ashish is doing well. Child is now admitted under the BMT ward now. His pre-transplant tests started a couple of days back and is still undergoing few test. Once all the tests are done, doctors will schedule his Bone Marrow Transplant.

Thank you once agian.

Meet had developed a slight cold, and that is why the chemotherapy was delayed. He will start chemotherapy very soon, as the doctors are preparing him for bone marrow transplant. His sister has been identified as the donor.

It is my request to you all as a father to please keep sharing this campaign, because my son needs this transplant at the earliest. This can be possible only with your help.

Regards,
Ashish
Load more
Donate
Report fundraiser
See how thousands are crowdfunding for their causes on Milaap
Content Disclaimer: The information and opinions, expressed in this fundraiser page are those of the campaign organiser or users, and not Milaap.
If such claims are found to be not true, Milaap, in its sole discretion, has the right to stop the fundraiser, and refund donations to respective donors. 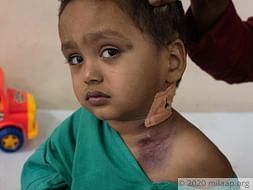