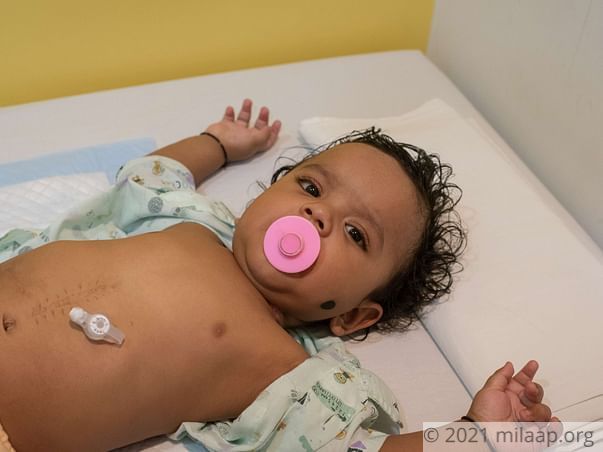 Ruksana and Nijamuddin’s day revolves around feeding their 10-month-old boy, Husain 120 ml of milk every 3 hours. The amount needs to be exact or else the extra milk will come out - not out of the baby’s mouth but from a hole in his stomach through which they feed him. Baby Husain was born with congenital defects that didn’t allow him to eat or poop normally like any other child. He has already had one surgery but he needs another one in March so that he can live a normal life.

Husain was a premature baby born with esophageal atresia (this means that his food pipe didn’t connect to his stomach) and tracheoesophageal fistula (an abnormal connection between the windpipe and the food pipe). He had to stay in NICU for 2 weeks just after his birth and undergo a surgery.

“He has started to have problems again. He can’t pass stool nor can he digest the food. So, his stomach gets bloated and he cries in pain. He is 10 months now but he has only had liquid food." - Ruksana, mother.

Little Husain is growing up and is the apple of everyone’s eyes. His sisters adore him and never leave his side. He giggles and waddles in the room but he is most amused by the button-like thing on his stomach.

“He tugs at it or sometimes rubs his belly on the floor and the button on the hole of his stomach comes off. We have been very worried about this - the doctors have told that he needs the surgery at the earliest. It will be dangerous for him if we make any further delay. If he bleeds or gets infection in that area, his life will be in danger." - Nijamuddin, father.

An immediate surgery is this baby's only hope

The surgery that is scheduled in March will lift Husain’s stomach tissue to meet the remaining tissue of the upper food pipe. This would establish the full connection between throat and stomach allowing him to eat normally. But his father doesn’t have the funds for this surgery, that would cost him 8.5 lakhs. He has already spent about 10 lakhs, including funds raised previously on Milaap.

“I used to work as a driver in a private company but for the last few months, I haven’t been able to go to work. I was at home taking care of Husain, helping Ruksana run the household. With no savings left, I don’t know how I can afford this surgery. Without this his life will be at risk, please help me.”

With your support, these parents can gift their baby a normal life

Donate
0%
Be the first one to donate
Need Rs.850,000
Card, Netbanking, Cheque pickups
Or Donate using