Security Guard's Son May Bleed To Death Without Urgent Surgery | Milaap
This is a supporting campaign. Contributions made to this campaign will go towards the main campaign.

Security Guard's Son May Bleed To Death Without Urgent Surgery 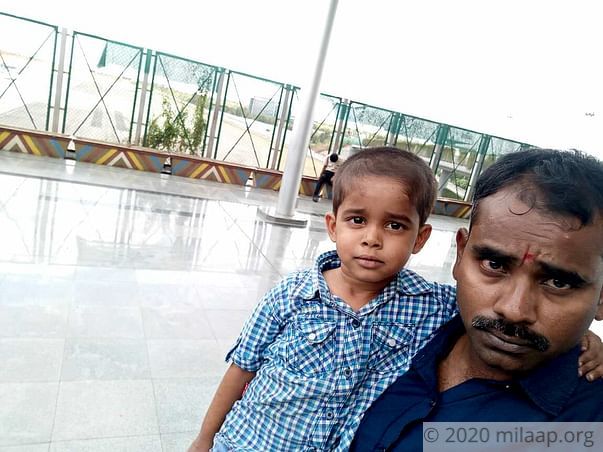 “He keeps asking when he will be out of the hospital so that he can go to school again. He wants to go watch movies in big cinema halls and eat biryani later. I feel so helpless as a father because I can’t fulfill any of his desires. Sometimes, the hospital staff get biryani for him and on those days, he is the happiest. Watching him smile like that, makes all this struggle worthwhile.”

Little Madhan is a very cheerful soul, who has no idea what he is battling. When his parents enrolled him in the village school, he was very excited. He could attend school for barely 2 months, post which his parents made him dropout because his life is in danger.


“Initially no one could diagnose him, they thought he had a problem of nosebleeds and would prescribe him medicines. Despite that his nose would bleed. Soon after, he started vomiting blood.”

6-year-old Madhan has been suffering from severe nosebleeds since he was barely a year old. Despite rounds of medication and intravenous saline drips, his condition never got better. It took 5 long years of suffering for the family to receive a diagnosis. His face would swell up, he would get painful and itchy skin rashes and blisters, and then his skin would shed off, leaving Madhan irritated and crying all the time.

Madan has a weak immune system and is prone to bleeding

Eventually his condition worsened and he started throwing up blood. His parents could not rely on their local doctor’s diagnosis anymore and rushed their little boy to Citizen’s Speciality hospital, where he is being treated currently.

Upon running a lot of blood tests, the doctors diagnosed little Madhan with Wiskott Aldrich Syndrome. It is a rare genetic disorder in which the patient experiences severe eczema (an irritable skin condition which causes blisters and rashes), loss of platelets, and immunodeficiency. Madhan is suffering from this rare disorder and the only treatment is a bone marrow transplant.

In order to keep his condition stable, Madhan needs blood and platelet transfusions every other day. He endures everything with a smile when his parents tell him that he can go meet his favorite movie character, Baahubali, once he is out of the hospital.

They have already lost a child to poverty

Madhan had a younger brother, who was born with a hole in his heart. He died when he was just 8 months old, since his parents could not afford his treatment. After going through the trauma of losing one child to poverty, Madhan’s parents are willing to leave no stone unturned in getting Madhan the treatment he needs.

Malleswari, Madhan’s mother, was found to be a compatible bone marrow donor, upon running the tests. But in order to get the transplant done, they need Rs 30 lakhs, which is an impossible amount for the family to arrange. Madhan’s father works as a security guard, and his mother works in a clothes store. Their combined income is so low that they are barely able to manage their household expenses within that amount.

In order to pay for the expenses so far, Madhan’s parents have borrowed money from their relatives and friends, and have also sold off the only patch of land they had. Now they are left with no resources whatsoever to fund his treatment any further.

To save their only child, they need your help. Your contribution can make the bone marrow transplant happen, and save little Madhan’s life so that he can live all his dreams.

Please help save Madhan and bring back joy into his parents’ lives.

UPI: rzpy.givetomlpmadhanre003@hdfcbank (Copy to clipboard)
Or
Click here to read the instructions before you make a bank transfer. 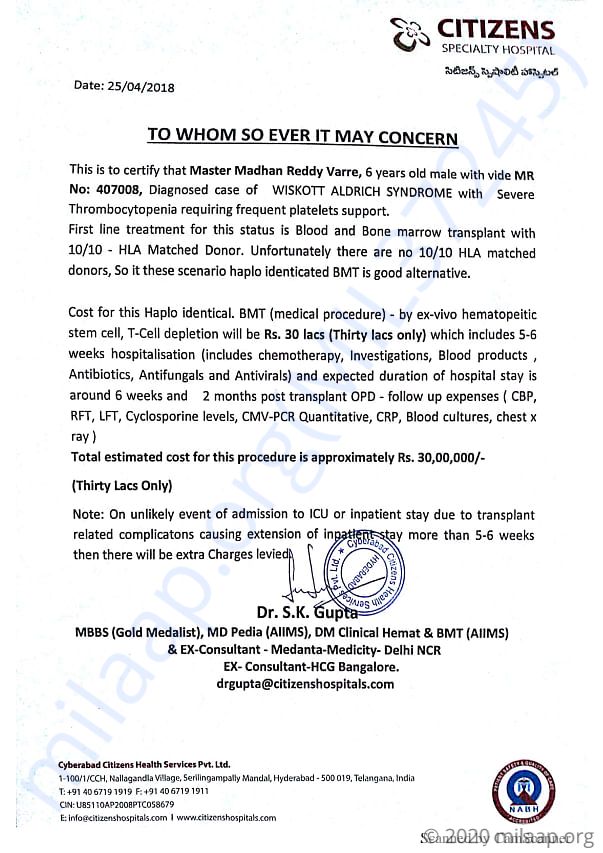 UPI: rzpy.givetomlpmadhanre003@hdfcbank (Copy to clipboard)
Or
Click here to read the instructions before you make a bank transfer.

Madhan is doing ok. He is undergoing his treatment and is recovering. He is stable and is responding well to the treatment.

Madhan is now doing okay and is undergoing treatment. He is required to visit the hospital once a week for blood transfusion. The family is running low on funds for the bone marrow transplant to take place. The mother maybe a potential donor and the surgery is likely to be done once enough funds are raised for the same.

Please keep supporting so Madhan can be given the best of medical treatment possible. We shall keep you posted.

Regards,
Sravanthi
Load more
Donate
Report fundraiser
See how thousands are crowdfunding for their causes on Milaap
Content Disclaimer: The information and opinions, expressed in this fundraiser page are those of the campaign organiser or users, and not Milaap.
If such claims are found to be not true, Milaap, in its sole discretion, has the right to stop the fundraiser, and refund donations to respective donors. 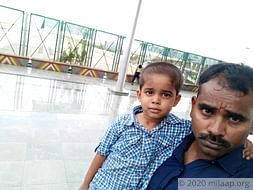 Security Guard's Son May Bleed To Death Without Urgent Surgery